Natchez Mississippi is a lovely, small city built atop a tall bluff over the Mississippi. Its historic district has the largest collection of antebellum homes in the country. Since it used to be home to some of the country’s most wealthy cotton plantation owners, it has a number of beautiful mansions which have been beautifully restored as Inns and Bed and Breakfasts.

Indians originally farmed the land and fished the river, In 1682, they welcomed the first French exploratory expedition. The relationship changed when the French built a fort in 1716 and effectively forced the Indians from their land. As the French began settling the area, they made it the first European settlement on the entire Mississippi River. The French controlled the area until 1763 when the British won the French and Indian War. Spain captured it in 1779 and brought in slaves to cultivate cattle, tobacco, indigo and lumber. It became part of the Mississippi Territory and fell under the domain of Congress in 1795, after which cotton was planted.

The planting of cotton and particularly the use of the cotton gin dramatically increased the demand for slaves. By 1800, cotton had begun to create great wealth for the “Nabobs” who owned the land and the slaves. The planting and wealth multiplied after the 1811 deployment of the steamboat, which allowed huge volumes of cotton to be quickly and inexpensively shipped all across the country and to Europe.

When Lincoln was elected president in 1860, Natchez, whose wealth was so dependent on selling cotton to northern factories and internationally to Europe, was deeply divided on, but ultimately came down against secession. It, however, was part of Mississippi and ultimately had no choice. The city ended up contributing men and supplying goods to the Confederacy. After seeing what happened to Vicksburg, Natchez’s mayor decided to surrender the city. His decision ended up saving many lives, not to speak of the 168 antebellum homes that makes the city such a valuable time capsule.

After the war, Natchez went through several years of Union occupation and then imposed the same types of Black Codes and discriminatory Jim Crow laws as did most other southern cities. While many of the city’s elite did leave after the war, cotton continued as the primary contributor to the area’s economy. The, in 1910, a boll weevil infestation and farm mechanization devastated the region’s economy and led to the first of the Great Migrations of people to the north. The economic stagnation lasted until about 1932 when the first of the city’s antebellum home Pilgrimage Tours (in which dozens of antebellum homes are open to visitors) helped jumpstart the tourist industry and especially the 1950s, when petroleum and manufacturing companies began to move into the area. This mini-boom lasted until about the 1970s when companies began closing. in fact, since 2004 when the last manufacturer (International Paper) closed, the city has become almost totally reliant on tourism and to a lesser extent, gambling.

We tried to take full advantage of our short stop in Natchez by:

While Julie certainly showed us many of the mansions and historical sites, she also explained the history of the city and the homes, in addition to the more personal stories of the people who built and lived in them.

Natchez, as we learned from Julie, is facing an economic and a demographic challenge. The economic problem, which is reflected in the incredibly low real estate prices, is based on the always limited, but increasingly concentrated economic base. This has become especially pronounced after closing of the few remaining factories. The current economy is now based overwhelmingly on tourism and to a lesser extent, gambling, the inflow of retirees (due largely to the city’s charm and low prices) and inherited wealth (which is funding much of the renovation).

The demographic problem is based on the same lack of economic diversity. Since the vast majority of jobs are now on tourism, young adults are leaving for larger cities. And as retirees die off, their children do not want to retain their parents’ homes. Hence, many properties are up for sale with few buyers, which drives down pricing even more. While this all leads to questionable future, the city is currently a beautiful slice of the past. The Northern District is home to many of the more opulent homes and the entire district has many interesting sights including: 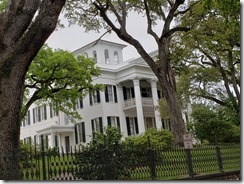 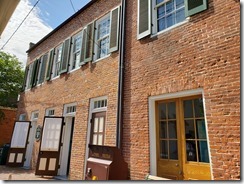 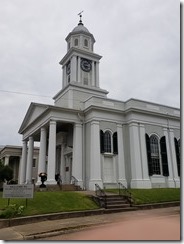 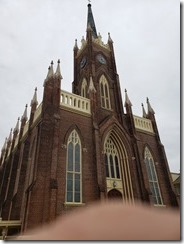 Additional places to visit include: 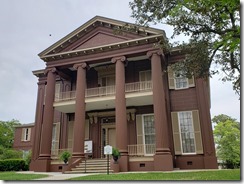 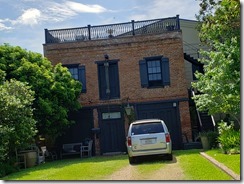 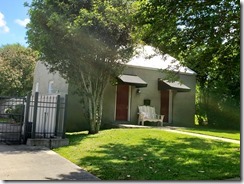 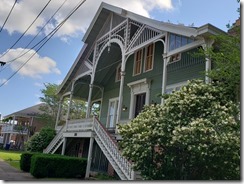 Other interesting buildings include the mayor’s house; the city guest house; the former men’s club (which is now being converted into an Inn); a few post-war gingerbread Victorians; and Antiques Row, which occupies a couple blocks of Franklin Street.

Magnolia Grill was our one restaurant visit. Located beneath the bluff on which the city is built, this Under-the-Hill area is where the city’s wharves and warehouses—not to speak of its gamblers, thieves, gangsters and prostitutes—were located. Today it is home to a couple restaurants, gift shops and the old Saloon bar and lovely views of river and the sunset . We enjoyed all dishes: fried oysters with cornbread, ribeye steak, salad, Tasso grits, twice-baked potato and buttermilk coconut pie. The wine list, however, was very limited, from which we chose glasses of a Louis Jadot pinot noir and Sebastiani cabernet.

We stayed at the Garden Song B&B in Natchez’s garden district. This is a beautiful old home in a great location, from which you can walk everywhere. Each room is different. We stayed in Nat King Cole which had a fireplace and a huge bathroom with a Japanese-style washing toilet. Breakfast was very slow but it is the south. We had to ask Ruby for coffee and hot water multiple times. But as 4 guests were unexpected for that morning, she might have been a little overwhelmed. The owner is a delightful southern gentleman who is very helpful. I only wish we had more time there.