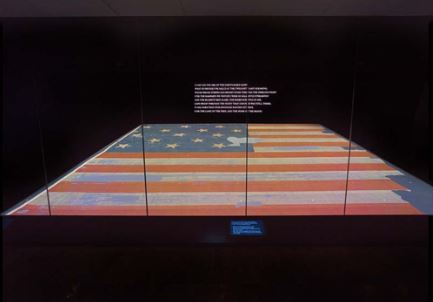 The National Museum of American History of one of the dozens of free Smithsonian museums in Washington DC. And what a treasure. Through narratives and exhibits, it traces American history within the context of several broad themes: democracy, diversity and inclusion, war, the presidency, food, transportation, business, inventions, and so forth. If you are interested in American History and are in Washington DC, you can easily spend a day in “America’s Attic”. While its exhibits change throughout the year, our 2022 visit provided an interesting education.

The American Enterprise and Innovation Galleries trace the history of American business.

The exhibition then moves to the “Consumer Era” (the 1940s-1970). A surge of consumer spending resulted from a combination of factors:

This surge was complemented by the growth of the highway system, the emergence of widespread credit, and computers and automation. It brought a huge change in the American home from suburban living, to television, and electric refrigeration.

It even spawned a new form of corporate-created small business opportunities through the emergence of franchising. The tail end of this era also led to a surge of consumer advocacy and activism—largely ending with the energy crises and stagflation of the 1970s.

The so-called “Global Era” (the 1970s through 2010) resulted from the globalization of manufacturing, trade, finance, labor, and brands. However, the topic was addressed in much less detail and with less discussion of the downsides. The sides of the hall contain profiles of individuals who made a significant contribution to American business over the last 250 years and the evolution of advertising.

Inventive Minds profiles the traits of some of the nation’s leading inventors and inspires children and young adults to apply them to their own careers.

Places of Innovation profiles how a number of the country’s regions have incubated new technologies and companies that led to the emergence of complementary industries and strong growth. It suggests that innovation can happen anywhere when ideas, resources, and surroundings come together.

Some of these innovative locations include:

History of Science and Technology

This section discussed the value of collecting everything from books to fossils to butterflies as a means of categorizing, accumulating, and synthesizing knowledge.

The Value of Money

The history of money starts with stone money. It then traces the U.S. state currencies to national coins, paper currency, digital payments (in the form of credit and debit cards (albeit not crypto currencies) as well as the art of and cultural roles played by different forms of money.

This section exhibits various transportation modes and even has Julia Childs’ kitchen.

The second-floor exhibit discussed the history of the War of 1812 and the shelling of Fort McHenry. A display showcases the well-preserved, 15-star flag(which is missing one star that somebody had once cut out for a souvenir). It discussed every detail about the flag: the material; the woman who sewed it; how it was preserved and ultimately sent to the Smithsonian; and how it inspired Francis Scott Keye to compose the national anthem as he watched the shelling of the fort and the survival of the American flag.

Many Voices, One Nation

How did the many voices of people in America shape our nation? The nation was initially settled in pockets. Different nationalities searched for a place where they could practice their own religions or be with other refugees from their home country or of a similar faith. For example:

While many of these early settlements were driven by religious freedom, they were anything but free for those who wished to practice religions other than those of the founders. There were, however, a few exceptions:

These groups, especially the much larger Pennsylvania group, morphed into melting pots. They attracted a range of religious and economic migrants from across northwestern Europe, and especially Germans. It was largely these people who ended up settling in the Upper Midwest.

Other groups, however, especially Africans, had no desire nor choice in leaving their homeland and coming to America. They were kidnapped, shipped against their will, and forced to work as slaves in the growing number of plantations in the Caribbean and American southeast.

And then, of course, there were Native Americans, who also freely migrated to America, albeit millennia earlier and of their own free will from Asia.

The exhibit explains how these separate minorities gradually (albeit often incompletely) integrated through a combination of normal everyday life and interaction and with assistance from organizations including the American educational system, the U.S. military, and sports.

A separate exhibit provided an overview of both the integration and the entrance of evermore nationalities into the American mixing pot. The story is told through the history of a single Ipswich Massachusetts house over 200 years and five generations of its history.

The Women’s suffrage exhibit traces the long road to women winning the vote to vote. It starts from the initial meetings in Seneca Falls. It explains the critical roles of the “Trinity” (Susan B. Anthony, Elizabeth Cady Stanton, and Lucretia Mott) and the steady parade of marches for women’s rights. It then proceeds to the passage of the 1930 passage of the 19th Amendment.

How did the U.S. create a government “for the people, by the people”? While the Constitution gave states the right to determine who could vote, most initially limited that right to white males who owned property and/or paid taxes—a mere six percent of the population. These rights were gradually extended to all white males. In 1860 the 15th Amendment gave voting rights to African America males. The 1930 19th Amendment gve women the right to vote. Ultimately, people from age 18 years of age (compared with 21) got voting rights in 1971 with the 26th Amendment.

But not everybody has an equal right since many states have imposed (and are increasingly expanding) formal and informal restrictions on the rights of minorities. Moreover, many of those people who have the technical right to vote have limitations. They may lack knowledge of their rights or the issues on the ballot. Or they may have difficulties getting to the proper polling location.

Nor does this consider factors such as the unequal voices in shaping issues that are put on ballots or decided by administrative agencies. Not everybody has the lobbyists nor the money to shape the issues on which voters will vote (especially after the 2010 Citizens United Supreme Court decision).

Then there is back-room dealing and outright bribery, the role that special issues and media have in persuading voters, and the increased loyalty that people give to parties, rather than the actual merits of the issue at hand.

So while we have made significant progress toward the concept of one person, one vote, we are still a long way from this in practice. And apparently, we seem to be moving even further away, rather than closer.

This section explains the emergence of the presidency and the Cabinet and the growing accumulation of power in the executive branch. It also has profiles and memorabilia of each of the country’s presidents and their wives.

The Price of Freedom

The Price of Freedom looks at the many wars in which the U.S. has been involved throughout its history to protect its freedom. It begins with a brief overview of the pre-independence French and Indian War in which we fought with England against France and its Indian Allies.

It then focused on the country’s three largest, most deadly wars and probably those that were most critical to the long-term future of the country.

The exhibit explained the privations of the Continental Army and the challenges Washington faced in getting sufficient money from the states. It examines how we almost lost the war, before the turning point of the Battle of Saratoga and the decisive Battle of Yorktown. An exhibit displays Washington’s battleground camp gear.

Lincoln struggled to get his continually rotating cast of commanding generals to take the offensive in a war in which the Confederacy only had to prevent the Union from full victory in order for it to win the war. It discussed the Union’s strategy of

Unfortunately, Lincoln was assassinated before having a chance to carry out the South’s Reconstruction Program. This task was left to his successor, Andrew Johnson. As a Confederate sympathizer, he removed the teeth from efforts to reform the south.

Public opinion may have kept the U.S. out of the war until it would be too late to stop the Axis powers of Germany and Japan were it not for the Japanese bombing of Pearl Harbor. Luckily, we did get in time. The country engaged in unprecedented savings and manufacturing efforts that allowed Allied troops to defeat Germany and develop the Atomic Bomb before being forced to launch an incredibly deadly invasion of the Japanese mainland.

Most of the wars between the Revolution and WWI were”Wars of Expansion” or “Discretionary Wars”. They were generally intended to expand the United States’ territory or at least its influence.

The War of 1812, for example, was initiated by an effort to grab Canadian territory from England. The country was forced to evacuate the nation’s capital in the face of British advances before finally forcing the British to surrender at the Battle of New Orleans.

And then there was the “Manifest Destiny” between the administrations of James Polk and Teddy Roosevelt (1845-1909). This 19th-century belief was that the expansion of the US throughout the American continents was both justified and inevitable.

And this does not include non-U.S. wars that the U.S. initiated. For example, Panama’s U.S.-supported gunboat secession from Columbia cleared the way for the U.S. to build the Panama Canal.

The U.S., meanwhile, did all in its power to avoid getting involved in World War I until Germany’s continual sinking of U.S. trans-Atlantic ships forced its entry (which effectively turned the tide of the war).

Then there was the Cold War and the Vietnamese War and the bombing of Cambodia (to prevent Indochinese “dominos” from falling to the Communists). And the War on Terror, with the U.S. invasion of Afghanistan and the truth-stretching ploy to invade Iraq.

Not all of the past is admirable. But we need to learn from our past to avoid future mistakes.