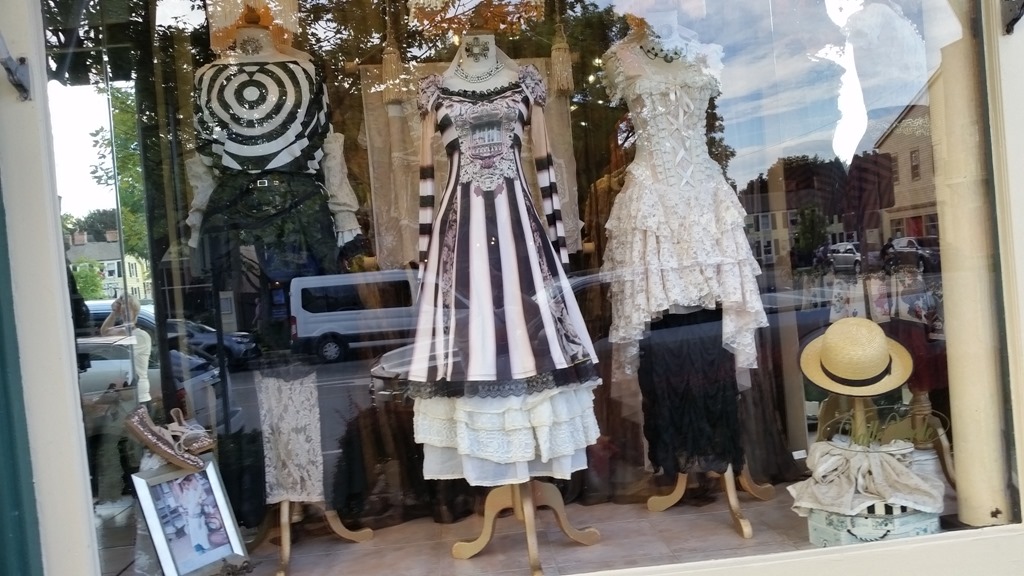 It had been 7 years since our last visit to Niagara-on-the-Lake Canada.  This lovely, historic town on the shore of Lake Ontario is the home to Ontario’s wine region, the George Bernard Shaw Theater Festival and a number of credible, if not especially memorable, restaurants. The Victorian-era, tourist-centric town retains its charm even with the crush of tourists who deluge the town during festival season.

Funded in the 1780’s by British-American loyalists escaping the newly-independent United States they established a new settlement in still British-controlled Canada—at least, that is, until 1813 when the American’s captured and then (on retreat) burned the town. Rebuilding began shortly thereafter in a period to which the oldest of downtown’s brick buildings date.

Although the entire town is packed with very beautiful English-style gardens, Queen Street, the main commercial street, is especially scenic, with lovely mini-gardens in front of restaurants, along curbsides and even cradling public benches.

The street, meanwhile, ends at a lovely bandstand and park on the shores of Lake Ontario.

We usually take in a play or two at the George Bernard Shaw Theater during our irregular visits. Unfortunately, neither of us were intrigued by the schedule for the one evening at we would have been able to take advantage of the Festival. The good news Is that we were able to find more than enough wineries (most of which we visited on previous trips) to occupy our one full day in town and more than enough restaurants to occupy our evenings.

Our tastes for wines in this area are not for the reds (although we do appreciate some of the Cabernet Francs and Merlots–particularly Inniskillin’s 2017 Cab Franc and its wonderful, extremely reasonably-priced about ($22 U.S.) 2016 Montague Vineyard Merlot.

The reason we return to the Niagara peninsula, however, isn’t for its dinner wines. It is for its dessert wines, and especially its Icewines (spelled as one word for complying Niagara Peninsula wines). These wines come from grapes that are picked and immediately pressed at night, after three straight days of minus 8-degree Centigrade (17.6 Fahrenheit) temperatures (often in January or February). They can surpass 40 brix (very sweet) and yield wine with residual sugar levels of a minimum of 100 grams of residual sugar per liter, and sometimes up to 230.

Of these, we again found many that we not only enjoyed, but decided that we had to find a way of carrying for the next three weeks of our trip and then finding a way to get back to California (a task that is greatly complicated by a law that prohibits wineries from shipping to U.S. residences). Among our particular favorite Ice wines from the roughly dozen wineries at which we visited were:

And speaking of Pellar-owned wineries, we also stopped at its Wayne Gretzky winery. While we didn’t especially enjoy its wines, we did enjoy the Gretzy memorabilia and brief overviews of his incredible career. And since we were there, Tom also sampled a few of Gretzy’s distilled spirits. These included a Grappa-like distilled Vidal, an 80-proof ice cask rye-based (with some malted rye and corn) Ice Cask whiskey (with a bit of sweetness from aging in Icewine barrels), it’s very strong 99 Proof whiskey and its very, very easy drinking Gretzky Cream, made with its whiskey and fresh, full Ontario cream (a beverage that would give Bailey’s Irish Cream a run for its money, if it were available in the U.S. And speaking of alternate Pellar-owned beverage makers, the Ontario branch of the company’s No Boats on Sunday cider company (also on the Trius/Gretzky campus) produces a crisp, 5 percent alcohol, Macintosh-based apple cider. (The company’s Nova Scotia and British Columbia operations produce their own ciders from other apples.)

Our biggest wine treat, however, came on our drive back to Toronto. A half hour drive outside of Niagara-on-the-Lake, took us to Tawse Winery, one of our favorite of the Niagara Bench wineries that we discovered on our previous trip. After trying to beg off on tasting dry white wines, we succumbed to our host’s entreaties to try at least one of the chardonnays. After a taste, we agreed to taste another, and then another. By that time, we had placed ourselves in the hands of our host to select those that he thought we would enjoy. He selected winner after winner after winner, from whites, to reds and onto Icewines. Although we enjoyed all eight wines that we tried, our particular favorites were the:

Tawes is a must-stop destination for exploring the best of Ontario wines.

Findley House Bed and Breakfast. This is a nice little B&B with 3 rooms. The hostess Gabrielle, was perfect for this job. Great breakfast and you could select what you wanted from a menu. And way too much food (we ordered half portions on the second day). The room was very room and the location was perfect–within walking distance of “downtown”. If you stay multiple nights, your rooms are not made up. Not a big deal for us however.