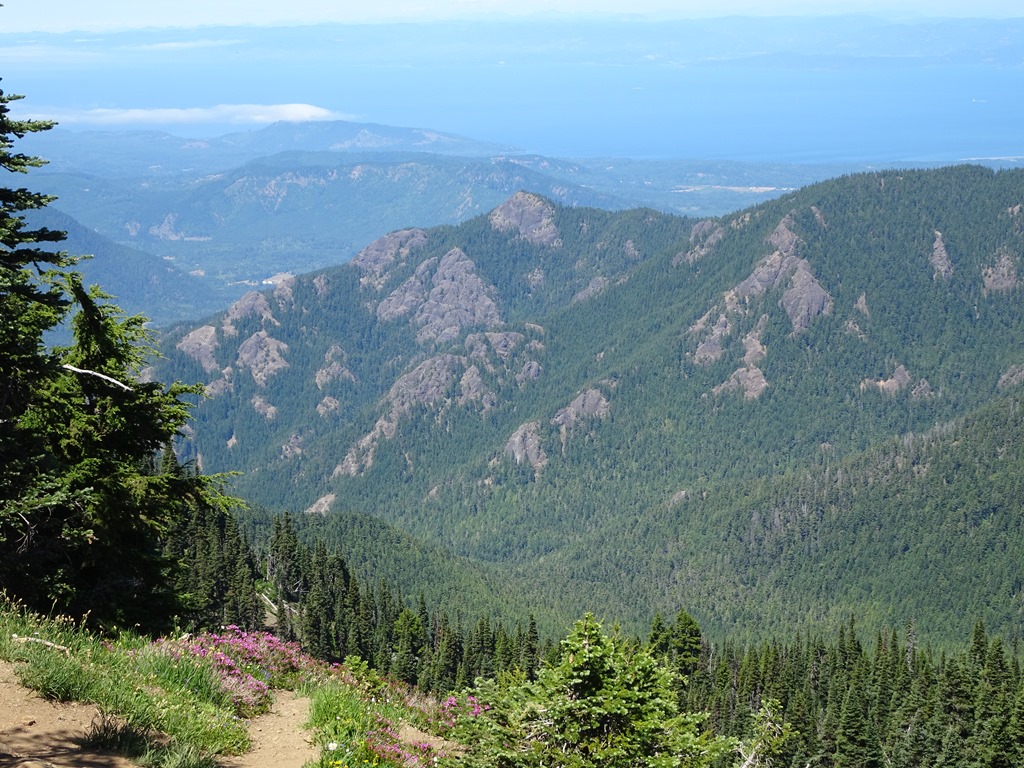 The Olympic Peninsula is a scenic peninsula just east of Seattle Washington. It is filled with steep, glacier-clad mountains, a conifer rain forest, rushing streams, and waterfalls. Most of its area is wilderness and devoted to Olympic National Park.  In its million acres, the park contains three primary, ecologically interlinked ecosystems: mountains, rainforest, and lakes

The Olympic Mountains are topped by Mount Olympus, a rugged 7,980-foot mountain. It and its neighboring cliffs contain steep cliffs, waterfalls, many types of trees (spruce, fir, cedar, and hemlock), and amazingly for this relatively low elevation and latitude, glaciers which are continually fed by the park’s average of 140 feet of snow per year.

The ocean created the Olympic Range. Underwater hot spots spewed lava which hardened quickly underwater. Then eons of ocean residue fell atop the basalt, hardened over the basalt, and then subducted beneath the continental plate to form the mountains. Glacial ice of up to 3,800 feet scoured the land and brought granite erratics to the area. While most of the glaciers have long since melted, a few do remain at high altitudes. However, they are fading rapidly, losing about 30 percent of their ice since the 1970s with several smaller one disappearing entirely.

Hurricane Ridge Road leads up into the mountains providing spectacular views in all directions. After a stop at the visitor center we took two of the several mountain hiking trails: 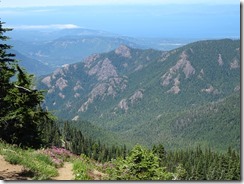 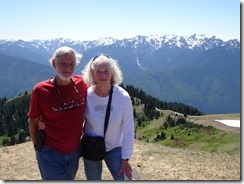 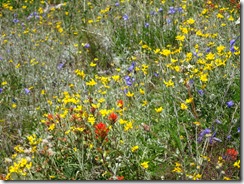 The rainforest was our primary motivation (although certainly not sole) motivation for visiting the park. The lush, moss-draped temperate rainforest consists of spruce, cedar, maple, and alder as well as many types of ferns and lichens.  An average of 200 inches of rain per year falls in the area. The snowmelt from mountain streams and rivers and fog condensation that drips from the canopy adds the equivalent of another 30 inches of water. This results in a totally different landscape and ecosystem than the alpine and sub-alpine ecosystem atop and surrounding Hurricane Ridge. Other than the portion of the forest that was denuded by clear-cut logging before it was designated a National Park, the ancient, primeval forest is characterized by huge spruce, hemlock, and cedar trees that are often 200 to 1,000 years old. The forest has multi-layered canopies and lots and lots of moss—moss that encircles tree trunks, falls from branches, and covers rocks and much of the soil. Beneath and surrounding the nearly ubiquitous moss are lichen, fungi, and ferns. Wildlife ranges from black bear to elk, cougar, gray wolf, and river otters, not to speak of bald eagles, numerous other birds, and innumerable insects.

These incredible forests can be best explored in two primary sections of the park.

The Hoh Rainforest has a visitor center and interpretive trail dedicated to this unique ecosystem. Right outside the park boundaries, you drive through a second-and third-growth forest that has gone through a series of clear-cutting and replanting. Note: The rainforest is so popular that the park only allows so many cars in at a time. We had to wait over an hour in our car to enter the park entrance. From the signs on the road, we were lucky as people often have to wait longer during busy times.

As you enter the park itself, you enter a primeval forest that is populated by a range of huge, first-growth trees, especially big leaf and vine Maples whose trunks are covered and limbs draped with mosses and other epiphytes. The forest floor is littered with fallen giants that serve as nurse logs for new cycles of life. The milky, turquoise-colored Hoh River, which originates 7,000 feet above the glaciers of Mt Olympus, which flows through the park, is continually blocked by logjams from decaying fallen trees. 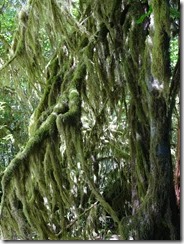 The forest has several trails. The Hall of Mosses trail is a short, flat, roughly one-mile interpretive trail goes through one of the most dramatic sections of the forest. Trees of 200-300 feet are draped in moss. Their shallow and widespread root structures grow inside and around the tree and can reach four or five feet above the ground. A combination of Western cedar, Sitka spruce, Douglass fir, and Western Hemlock form the forest’s upper canopy while species including alder and cottonwood, often near the riverbank, form the lower canopy. 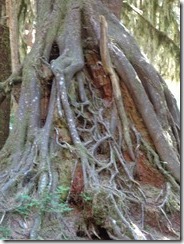 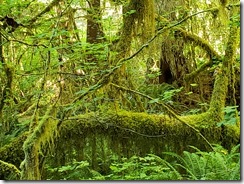 The ground is so covered with ferns, mosses, and lichens that new seeds often rise above ground level to get their fair share of light (with a side benefit of additional nutrients) by taking root on fallen, rotting “nurse logs” on which several seedlings of different species take root. Some of these nurse log seedlings grow in straight lines called “colonades”. Others are so close to each other that they appear as a single trunk which often separate as they grow taller. 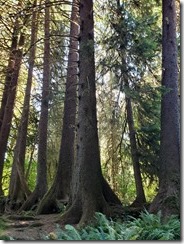 The real magic of the rainforest, however, is often below the surface. Rotting plant material and nitrogen-rich bodies of salmon who die after spawning leech into the soil. Insects picked up the nutrients and feed them back into the soil when they die or are left in bird or rodent poop. Tree roots and fungi whose complex mycelial root structures connect with and indirectly feed nutrients into the tree roots also feed the soil. Although the entire trail is covered in moss, the most beautiful section is a short spur to a Maple Grove whose big leaf maple trees are almost totally covered in thick layers of moss. 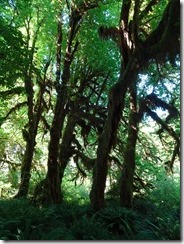 The 1.2-mile Spruce Nature Trail is a 1.2 mile mostly flat train that traverses a moss-draped primeval rainforest covered in moss and ferns. It also has a lowland area that had recently been covered by the Hoh River and is now a grassland that will soon sprout species such as alder and cottonwood and eventually mature into a mature coniferous rainforest. Another beautiful, and very easy trail to take.

The Quinault Rain Forest is in the southwest area of the park. It rivals the Hoh’s rainforest and indeed, beats it handily as being the home for of giant trees. In fact, the Quinault’s Valley of the Rainforest Giants, which circles Quinault and the nearby section of the Quinault River is home to the largest trees in the world of four conifer species and the largest in the country for two others. 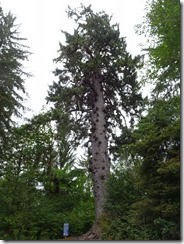 We took a couple of very short hikes in the Quinault area.

This trail is billed as a “mini-Hoh”. It is a short, 0.5-mile interpretive trail that takes you through all the highlights of a temperate rainforest in a short distance. And unlike the packed Hoh Forest, we didn’t have to wait in a one-hour queue to visit it. In fact, we were the only ones on the trail. And this one, which is next to a seasonally dry streambed and is set around a couple of pretty beaver-created ponds, this trail is more open (which provides more scenic views), has red alders near the pond, and more dramatically, several large, moss-draped big leaf maple trees among the larger Sitka spruce and western hemlock conifers.

The interpretive trail pointed out and explained many of the same features as the Hoh Forest trail, including: 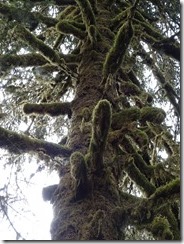 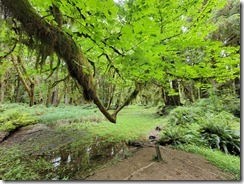 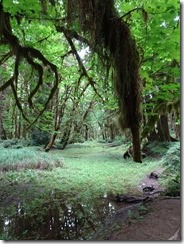 The park has over 70 miles that alternate between steep rugged cliffs, tidal estuaries pristine sand beaches, pebble beaches, and secluded, driftwood-strewn beaches and coasts with sea caves, sea towers, and sea stacks. While we couldn’t explore every inch, we did explore some of the areas. 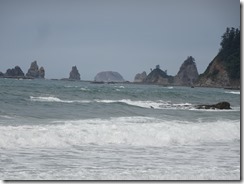 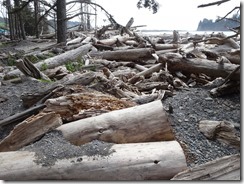 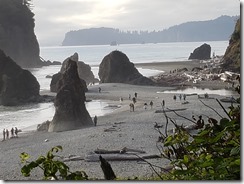 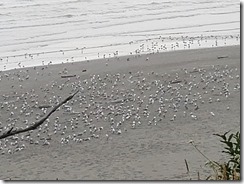 The park also has a number of scenic lakes including: 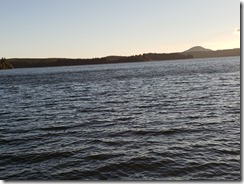 Ssnowmelt of the Olympics, its glaciers, and its alpine lakes feed the many streams and rivers that help water the trees, provide spawning grounds for salmon, and ultimately flow into the Pacific. While the park has literally hundreds of waterfalls and cascades, we visited only a few, including: 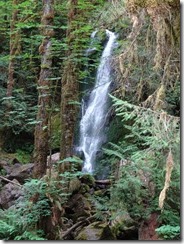 Nor do these even include the native Quileute villages, mineral hot springs, salmon hatcheries, logging and beachcombing museums, logging sites, a lumber mill, fishing villages, or ancient petroglyphs that one can visit.

We were as enthralled with the park on this visit as we were on our first. Even more so since we had somewhat more time (although we would have loved to have had another full day) and had a chance to take more trails and explore a few remote sites. Our only major disappointment—we didn’t see a single of the parks’ iconic Roosevelt elk.

Food choices are limited in the park. We stopped at a roadside shop that specializes in smoked salmon. We picked up two types of smoked salmon (smoked coho and our favorite, a barbequed smoked) and a box of crackers for a late lunch/afternoon car snack.

Our only sit-down meal was at the Roosevelt Room at Lake Quinault Lodge. We shared four dishes: an organic mixed green salad with lemon thyme vinaigrette, a quite nice wild king salmon fillet with Chinese black rice, and Meyer lemon vinaigrette, an overly salty parmesan polenta with roasted wild mushrooms, grilled asparagus, and roasted cherry tomatoes. Our dessert was a house-made Marian berry pie with vanilla bean ice cream. After sampling a Columbia River Chardonnay and Merlot, we selected another of only three reds that were available from a list of six red wines: a 2018 Erath Oregon pinot noir.

We also stayed at the Lake Quinault Lodge. We were a little nervous as the reviews of the property were not always glowing. However, we didn’t have many lodging choices in the area. While rustic, our lakeside renovated king room was fine. The bed was very comfortable and our room had a small balcony overlooking the lake. The bathroom looked like they installed a new bathtub liner but little else in the renovation. The sink was outside the bathroom. We had a small 1 cup hot pot for coffee and tea. And the beautiful lawn outside the lodge made one want to sit outside and enjoy the view. It was fine for a night. 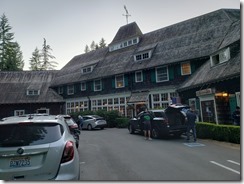 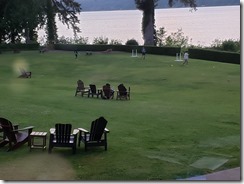