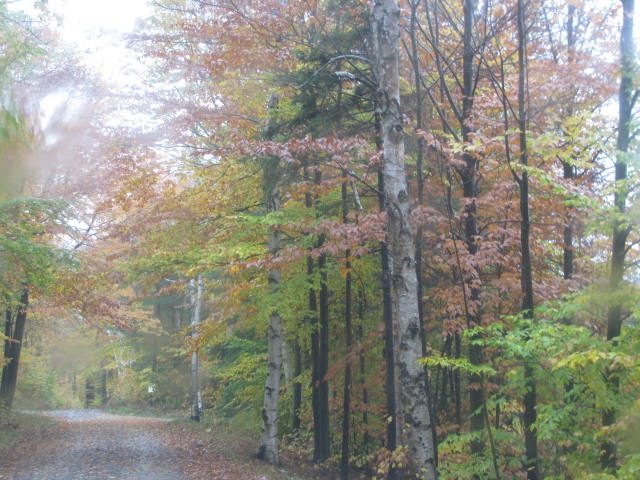 What we go through to discover a restaurant!

Although our entire Vermont trip was fun, our big adventure came very unexpectedly, during a quest to scope out a restaurant for our next trip.

As readers of our blog know, we take food and restaurant experiences very seriously. We will go hours out of our way to find and try the most interesting and well-regarded restaurants and sometimes, even schedule entire trips around a single meal (as we did a Boston to San Francisco/Yountville for our first dinner at the French Laundry and from Boston to Bradford Vermont for the Congregational Church’s Wild Game Supper (see our blog on Vermont church and community suppers).

When a friend told us of a tiny unmarked restaurant in a remote town, with irregular hours, no website and no answering machine, we were intrigued. Then, when they told us that it was a beautiful drive, we were hooked. Although we were unable to get there for dinner on this trip, we decided to take an afternoon drive to scope out the restaurant for our next trip.

Thus began our quest to find and prepare for a future meal at Stone Soup in the tiny, remote town of Strafford Vermont.

Since it had been raining all night and day, we decided to skip our planned hike and take the scenic drive to Strafford. The trip began as an uneventful, leisurely sojourn up the Pomfret Road. Then we got adventurous. Since we had plenty of time, we decided to ignore a turn recommended by our GPS and venture onto some of New England’s classic, sparsely populated gravel, one-lane country roads. We especially love these roads in autumn, when we are the only car around, surrounded by forests with leaves of every imaginable color, and when we stop, are in complete silence, other than the crunch of fallen leaves under our feet.

Our first back road did not disappoint. Five miles on a remote, one-lane path, covered by a canopy of bright yellow birch leaves, surrounded by 150-year old stone fences, without a home or another car in sight. The second gravel road started just as beautifully and even added a series of gentle hills to the multi-hued scenery. 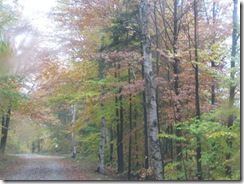 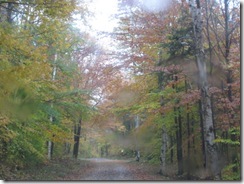 But, after about a couple miles of awesome scenery, the hills began getting steeper, the valleys deeper and we began running into occasional small patches of mud. Nothing serious, or so we thought. Although we mentioned the mud to each other, we didn’t give it a second thought.

The Muddy End of our Scenic Detour

Lulled by the serenity of the scenery and the security of our trusty GPS, we drove blithely ahead. Then, about three-quarters down the next hill, the mud became more frequent, ruts began to appear and the mud became steadily deeper. Although we began to get concerned, there was no place to turn around and we couldn’t even begin to think of backing all the way back up the hill, especially in the mud. So we drove, slowly and carefully on.

Too slowly, as it turned out. When we got to the bottom of the hill, we came to a mud puddle that looked a little deeper than the others. We entered too slowly and, without momentum to propel us forward, settled to the bottom, our tires covered to the rims, in mud. After a few minutes of gradual and persistent rocking—and a strategic push—we managed to extricate ourselves from the muddy morass.

Although humbled, we had clearly passed the point of no return. Besides, we could see, less than 100 feet ahead, that we were coming to another hill. Surely, as we started heading up, the ground would be less soggy and we could continue without incident.

We never got a chance to find out. Before we reached the hill, we came face to face with a field of mud so deep and expansive as to challenge a Hummer. We didn’t have a chance.

There we were. We couldn’t go forward, we couldn’t turn around and we certainly couldn’t back up through the previous mud hole and then up the hill, where it would be impossible to even see the road through our back windshield.

After a couple of minutes of contemplating our situation, we decided to employ a variation of the “St. Johns’ maneuver”, named after the American Virgin Island where we found ourselves halfway down a steep, very rough dirt road and found the stretch below us impassible. We searched the area for rocks, logs, sticks, and anything else we could find to create a path we could traverse in a sedan.

In St, John’s however, the road was dry and there were plenty of rocks around. In Vermont, we were in the middle of a mud field, there were no rocks (the stone fences had stopped about a mile before) and most of the wood was half-rotted. The good news was that there were a lot of half-rotten branches. We began filling the mud hole that we just traversed with wood. Then, after as much of a running start as Joyce could muster backing up, with virtually no backward visibility (except for Tom’s waving arms), in ruts that insisted on taking the car away from our carefully constructed paths, she made it over the first hazard.

Then came the next challenge. We still had to go back up steep muddy the hill—in reverse.

Luckily, we did find a small, almost solid clearing about a hundred feet up the hill. If we could manage to maintain momentum and stay on the road (despite the driver being unable to see the road) in reverse, we might be able to turn around and return to the top in drive, or at least in second gear.

We did make it to the clearing and, after a bit of shoring and maneuvering, did turn around and make it back up the hill. But darn, we were so intent on getting out of the mud, that we forgot to take pictures!

Since it only took us about an hour to get back to a stable roadbed, we still had time to find and visit Strafford and Stone Soup, and return to Woodstock for our dinner reservations at the fully booked Prince and the Pauper.

So, we vowed to listen to our GPS and stay on paved roads for the rest of the trip. We eventually arrived at Strafford, a bit soggy and muddy, but with Joyce, the car and Tom all in working order. But alas, we could find no semblance of a commercial building of any sort, much less an elusive, unmarked restaurant. After a few minutes of exploring every road and building in the small town, we found a tiny rural post office. You know the type; one of those post offices that:

The postmaster, of course, knew the exact location of Stone Soup and guided us to it. Although we found the building, a plain, unremarkable and unmarked white home, we found few signs that it was anything but a home—only a purple door and two benches along the front wall that we assumed were to accommodate patrons waiting for tables.

Although the restaurant was scheduled, at least according to what we were told, to open in another hour, we found no signs of light, life, or anything else that would suggest that we had arrived at a perpetually filled culinary destination. Glances through a couple of windows did not even show evidence of a dining room, reception area, or kitchen.

So, with our hard-fought for prize of speaking to the owners and viewing a menu dashed, we retreated to Woodstock (again, totally along paved roads). But after all that, we had our own culinary experience—dinner at another central Vermont culinary landmark and one of our perennial favorites—the Prince and the Pauper. (See our Woodstock blog for a discussion of Prince and the Pauper and other Woodstock area restaurants.)

Lessons from our quest

Good things, at least, in this case, did come to those who wait. We got out of the mud with a story and no harm and, while we did miss out on our chance to at least see Stone Soup first hand, we did end up with a memorable meal.

What did we learn from our adventure?

We did, however, learn (at least until next time) to pay more attention to subtle warning signs.

Any regrets? Only one: We were so focused on escaping our muddy morass that we never even thought to commemorate the experience in pictures.