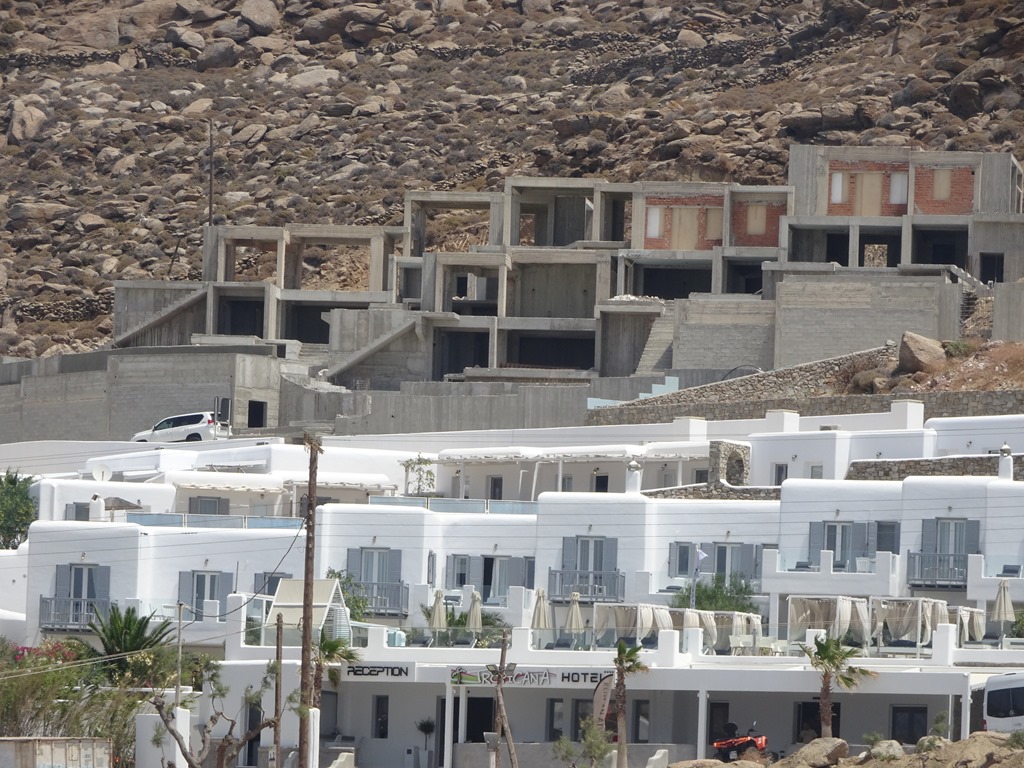 Mykonos Island is more than Mykonos Town. The South Shore is home to most of the island’s best and most popular beaches—beach after beach. While most cater to mixed crowds, many seem to be attractive to different clientele. There are, for example, family beaches (including Platys Gialos), some in which watersports are popular (such as Elia Beach), a few that attract nudists (like Elia and Super Paradise) and a number that attract(Super Paradise and parts of Elia).

We took a water taxi that stopped at several of the beaches, exiting at Elia Beach; the end of the line. During a slow walk along the lovely beach, which was crowded, but not yet packed for the season, we saw a wide range of sun worships and swimmers. A few families, but mostly adults: gay and straight, fully clothed, some topless and some nude, al of whom were partying (Mykonos is known as the party island). We then stopped for lunch before taking the water taxi to a very different type of Beach: Paradise, which along with Super Paradise and, to a lesser extent Paraga, seem to be pretty much, “anything-goes” party beaches. Although anybody can lay out a towel and sit in the sun, most have formal concessions where you can rent chaise lounges or cabanas for the day (rents run from 10-40 euros a day), and most have at least one place where you can get food (ranging from pizza and gyros, to quite nice full meals).

The beaches are mostly separated by rocky outcroppings and have differing stages of development. Some of the smaller ones, have only one or two small buildings and a few houses (mostly classic white, but a fair number of which are low-slung, or even built on the brow of a hill, of the same stone as the hills. Others, like Paradise, Super Paradise and Elia have good size communities on the surrounding hills. All throughout, but especially around Paradise and Super Paradise, are poured concrete or even nearly finished vacation homes and resorts that were apparently started during the heady days of the last decade, and at least temporarily abandoned during the crash. 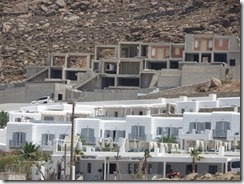 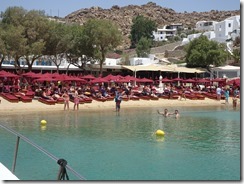 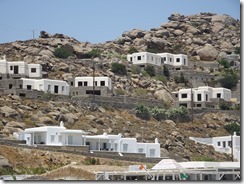 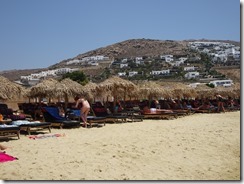 After a light lunch at Elia’s eponymous restaurant, we took the water taxi back to Paradise Beach, which is known for its clubs and party crowds. Some of these clubs, such a Tropicana, have blaring music and can accommodate several hundred, or probably more than 1,000 for drinks and snacks. While we were there before the big evening crowds arrived, we got with the vibe and selected drinks from their huge, five-page cocktail list. 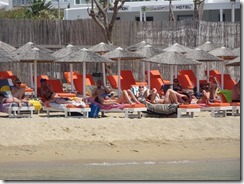 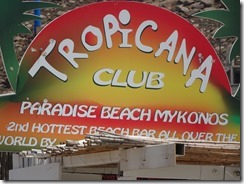 From there, we took a lovely seaside trail through a few neighboring beaches (Paraga and Agia Anna) to our dinner destination at Plati Gialos’ Avli restaurant. We had a relaxing dinner before catching a bus back to Mykanos Town.

Although we did not visit the island’s other, less touristy areas, they are:

During our beach tour, we had two small meals:

Elia Restaurant (at Elia Beach) where we enjoyed a Seabass carpaccio and grilled octopus (with a loca Nissas Pilsner. All while watching the crowds mill around the beach, the handful of people who actually swam, and those engaged in watersports, such as jet skiing or being pulled by speedboats on large inflatable, plastic rafts.

Avli, at Plati Gialos Beach), where, quite without planning, we ended up reversing our lunch meal with octopus carpaccio and grilled seabass fillet (with roasted baby potatoes and olives) and added a perfectly cooked (medium rare) rack of lamb with delicious sage-flavored gnocchi. For dinner, we also shared a bottle of wine, breaking our long string of Greek assyrtikos with a 2015 Italian Classico from Querciabello.