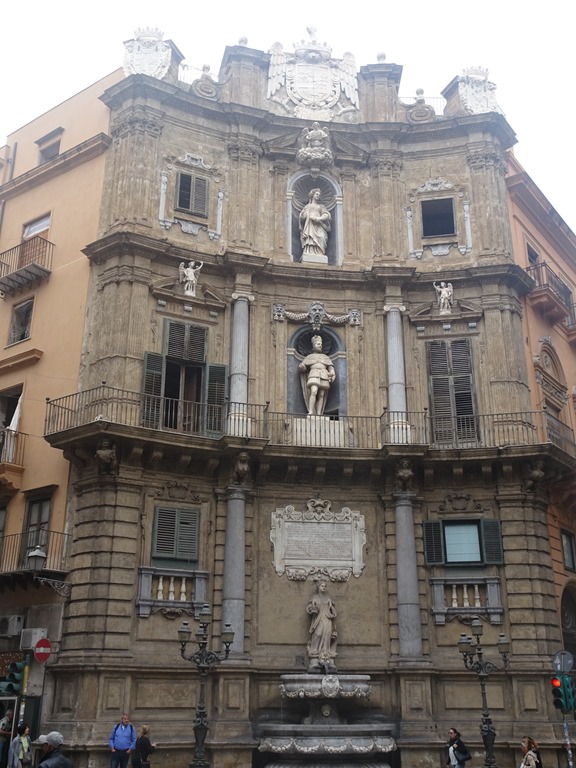 Nowhere is Sicily’s blending more evident than in Palermo, the island’s capital, largest city and primary seaport and s a good example of the island’s mixture of cultures.

The city’s activities are centered around Piazza Vigliena and its Quattro Conti, a combination of four baroque statues and fountains that commemorate the island’s Spanish kings. 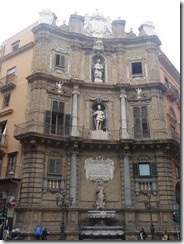 The Palazzo Royale, or the Palazzo dei Normanni, is a huge, 12th-century Norman royal palace (built atop the remains of an Arab fortress) that blends Norman, Moorish, Byzantine and, in its columns, Classical design elements. Its Oratorio contains some of the most renowned mosaics on the continent, with Norman victory scenes on the outside and amazing religious scenes and a carved stalactite-like ceiling and beautiful marble floors on the inside of this four-story palace with a lovely courtyard. Although a royal carriage was on display, the royal apartments, which were supposed to be open, were closed when we visited 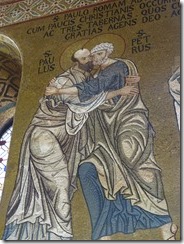 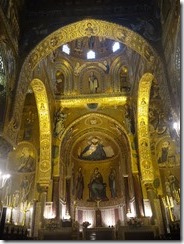 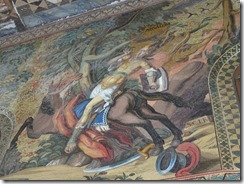 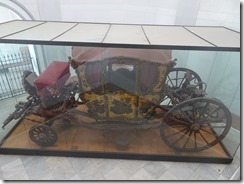 Duomo, built and expanded from the 12th through the 18th centuries, blends multiple architectural styles and design elements. While the Gothic towers on either end of the giant structure, the Norman style of the interior and central section of the exterior are much less effective. 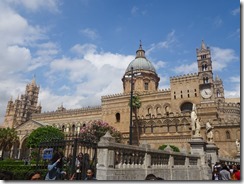 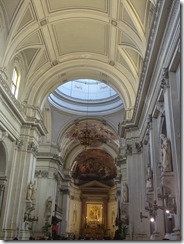 This  tiny, roughly 20×30-foot oratory, hidden in a tiny alleyway, is magical. Stucco master, Giacomo Serpotta decorated the walls in a continual parade of religious and allegorical figures in high relief stucco. Inserted among them are a series of smaller, roughly 1×2 feet that trace the stories of Saint Lawrence on one long wall and Saint Francis on the other. The fact that all figures and scenes are rendered in stark white adds to the Adding to the magic of the scene—the entire room and all the stucco is white. Adding to the setting was a darkly painted Carravagio of the two saints. Unfortunately, the painting was stolen about 50 years ago. Although photos are not allowed, a number are posted on the web. 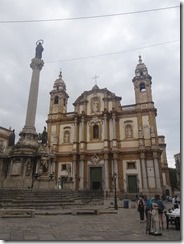 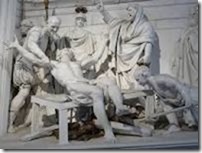 Also called the Capuchin Catacombs, these are a series of dry caves in which about 8,000 mummies and skeletons are displayed, many of which are dressed in the deceased’s best attire and arranged in poses. The figures, which were entombed between the 16th and 19th centuries, include men, women and babies of all ages. Some are standing (actually hanging) and some laying down, either on slabs or in coffins. Some are buried beneath the floor with plaques marking their graves. While most are a bit worse for wear, some of the mummified corpses look almost alive. Some even still have hair and beards. A truly unusual experience. 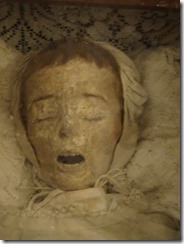 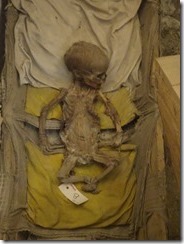 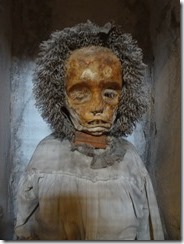 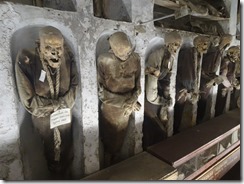 This  square, at the intersection of the city’s two main streets, in which the corners of the multistory buildings at each of the four corners are concave and decorated with baroque fountains, statues and at the top, crests. 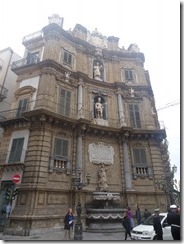 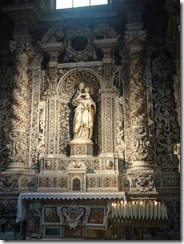 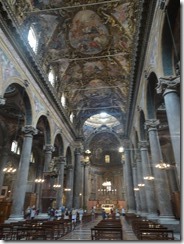 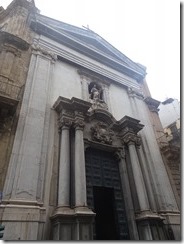 Piazza Pretoria is the home of the city hall and a large fountain surrounded by marble statues. Another small square, just behind city hall, is home to three churches, with a fourth (San Giuseppe ai Teatini) just across the street.

This Arab-like, medieval Kasbah or market in which merchants, peddlers and artisans are generally organized in alleyways that are dedicated to their products and crafts.

This Byzantine and Islamic-style church with lovely mosaics and frescos, an inlaid marble floor and an impressively carved altar. 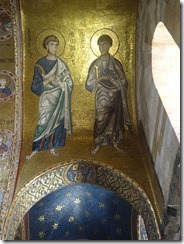 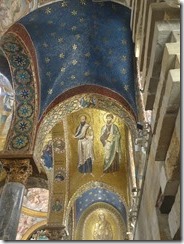 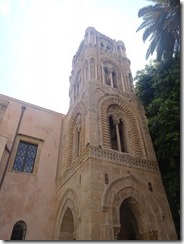 This 16th-century chapel with Baroque-style stucco decoration has a lovely Madonna-themed altar. 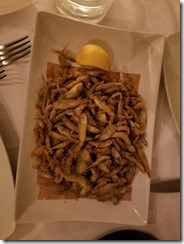 Delle Vittorie Luxury Suites & Rooms. Although we told them we were getting in around 8 pm, we were not informed that no one would be in the office to let us in. Apparently someone emailed us earlier in the day asking or arrival time (which we had already given them). As we only have email at night, we never received it. So, they were not there when we arrived. Fortunately someone was leaving the building and let us in. We got to the first floor where the office was and found an envelope with our name. Since we needed a map and needed dinner suggestions, we called their phone to get dinner suggestions. The suggested place was not open but, again, fortunately another guest made a recommendation. The information in the room re: internet did not work (they had 2 sets of instructions and we only saw one, the one that didn’t work). The next morning, they helped us with the right instructions and wifi was fine, but it went up and down. The room itself was very good. Large, comfortable and the ac worked fine. True, we got off to a bad start. If that hadn’t have happened, we would have been very happy here.