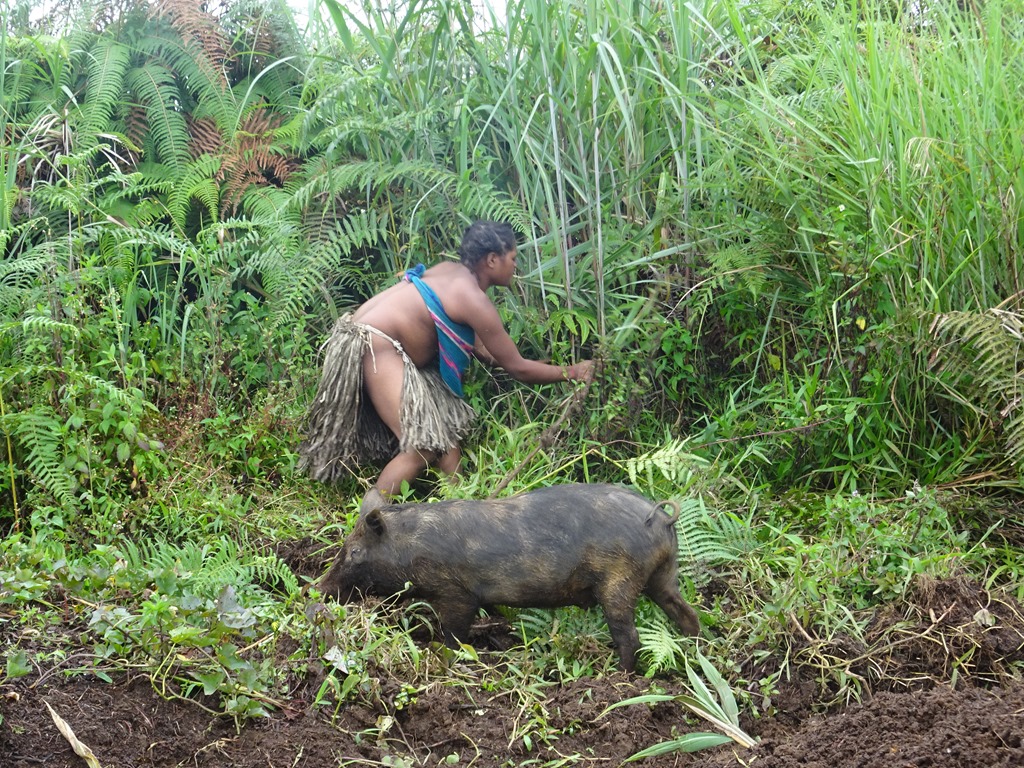 During our time in the Tari area in Papua New Guinea, we visited three Huli villages. Although it was clear that we were being given a “show” of how things were done and how people dressed, we still were impressed with the fascinating displays of very different and very unique aspects of hundreds of years-old forms of traditional Huli culture.

When we entered a Huli women’s village (where Huli men are not allowed to enter, but foreign men can),  we were greeted by a 14 year-old girl who was using a pig to help cultivate what will become a sweet potato patch. The pig ruts through the hard earth and loosens the soil. The girl further loosens with a shovel and plants vines from which, nine months later, sweet potatoes will be picked 9 months later. 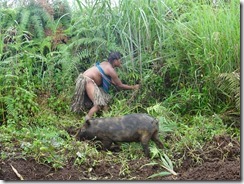 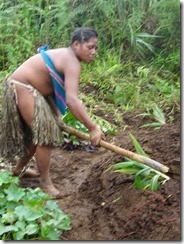 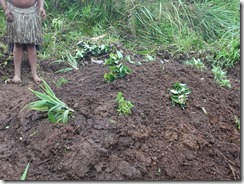 In the village itself, women were nursing their babies while weaving bags and baskets. 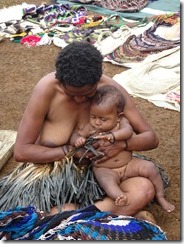 A group of women portrayed various ways that one dressed and painted one’s face for different stages of mourning for deceased husbands: 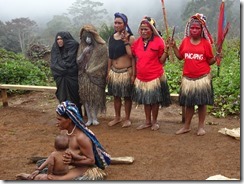 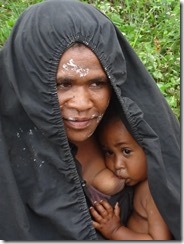 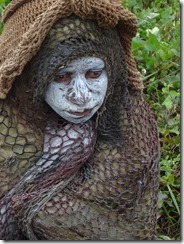 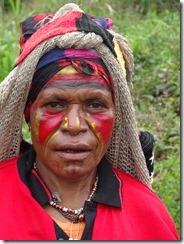 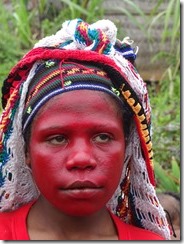 The Huli Sing Sing Village that we visited consists of the men who represent the clan in regular Sing Sing Competitions (including in the Goroka Festival that we will soon attend). All the men’s faces are decorated in the red, yellow and white colors of the Huli people, and each is dressed in amazingly beautiful and highly symbolic costumes. These include:

Each carries a Kuba drum carved and hollowed out from a large bamboo tree trunk and topped with bees wax-coated possum skin. After explaining their costumes and how they are made, the dancers (who are among the most frequent competition winners) provided a preview of the dance they will perform at the Goroka Festival. 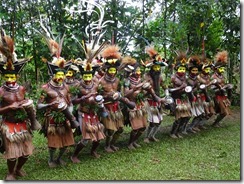 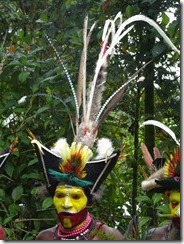 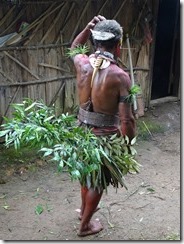 Huli men wear wigs made from human hair both for everyday meetings and events as well as ceremonial wigs that they wear for special occasions, such as for church openings, receptions for important visitors and public addresses. This unique school trains and provides rigorous instruction and rituals for men engaged in one of the most unusual professions we have ever encountered—being paid to grow and carefully cultivate hair for the 18 months required to make a single everyday wig. Only boys and men who have never had sex are eligible for this profession. Once accepted, they pay 400 kina (the equivalent of about $130) to the teacher and pledge to follow every one of his mandates. The teacher specifies the type of food they can and cannot eat during the 18 month period and prescribes and closely monitors the student’s following of a precise ritual. These include: 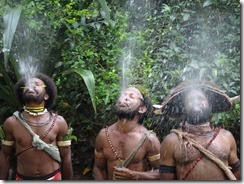 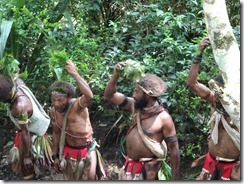 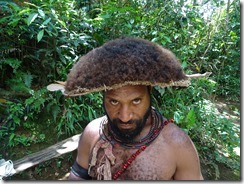 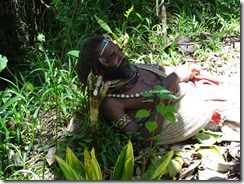 After 18 months, the teacher determines the day to cut their hair. The wigmaker cuts the hair, in a particular order, and mounts it on a frame. An everyday wig is then given to the student who promotes his wig and sells it for whatever price he can get (typically about 700 kina). He keeps about 80 percent of the proceeds and donates the remainder to the school. A ceremonial wig, however, requires twice much hair and is dyed in accordance of the needs of the buyer. It is decorated with feathers, twigs and leaves and sells for more than twice the price. Wigs, which are never washed or combed, other than with a pick, can last 15 or more years and are often passed down from father to son. While some students join the class only once or twice, some go through the process many times, essentially becoming professional hair growers (in addition to other work, such as in the fields or tending pigs—but never fulfilling the other of a Huli man’s primary duties; impregnating women and having children.

Men and women generally continue to live separately, in different parts of the village, even after they are married. Men typically live five or six people per hut and perform men’s work of making bows, arrows and other weapons, carving drums, hunting, tending pigs and clearing new gardens. They also cook most of their own meals. And yes, that is a cell phone around one of the men’s neck (for calls and text, not data). 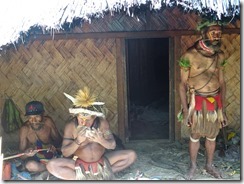 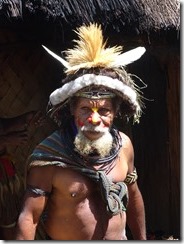 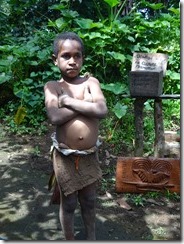 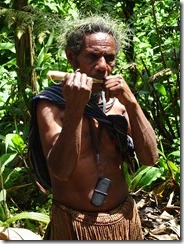 The women’s huts house the women and all young children. Girls remain in the women’s huts for life, learning women’s work and the responsibilities of being married in a male-dominated society. Boys by contrast, move into the men’s quarters at about eight years of age. But while young boys and girls both live with the women, they are in separate huts. They are also treated very differently. Boys, for example, can run around where and as they please, often naked. Girls, by contrast, are usually confined to their huts and when they do come out, must be fully clothed. 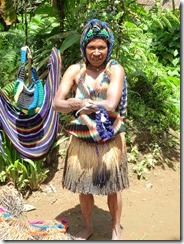 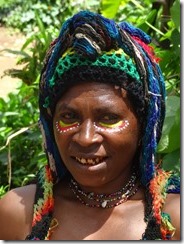 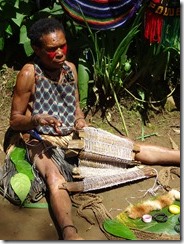 First marriages used to all be arranged. While many still are, a growing number are based on love or mutual attraction, particularly among those children who go to school. Then there are the rare cases when boys and girls have pre-marital sex. In that case, the boy must somehow come up with the marriage payment to the girl’s parents (typically about 30 pigs plus cash) and marry the girl. If not, he is banished from the clan and the community.

Second, third and fourth marriages are a different story. (Men can have as many wives as they can afford. Women only have one husband at a time.) The man typically choses the girl or woman he wishes and as long as he can provide payment that satisfies the wife’s family.

Men also determine when they want to “visit” their wives. But since they live in different huts, arrangements take different forms. In some cases, they arrange specific days and times. Sometimes they knock on the woman’s hut and occasionally, they resort to subterfuge, such as by pulling the rope of one of the wife’s pig until he squeals. When she comes to find out why the pig squeals, the couple go to their special place. This, however, assumes the women is not menstruating. During this period, men and women cannot be together and men cannot even eat food prepared by women.

This visit entailed a reenactment of a traditional spirit doctor healing ceremony that was common until the 1920s and 30s, when missionaries began making great progress in Christianizing the population and before Western medicine began making inroads into the country. The spirit doctors were called in (and paid) to address a difficult medical condition. The medicine men danced and chanted around a fire on which a pig was placed. The elder spirit doctor stood in the center, tending the fire and the pig to ensure that sufficient amounts of fat fed the fire and appeased the spirits that had been angered or offended by the ailing person. The pig is then eaten by the community. 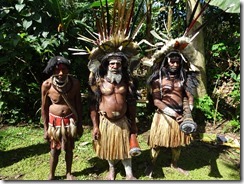 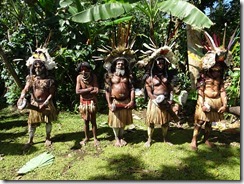