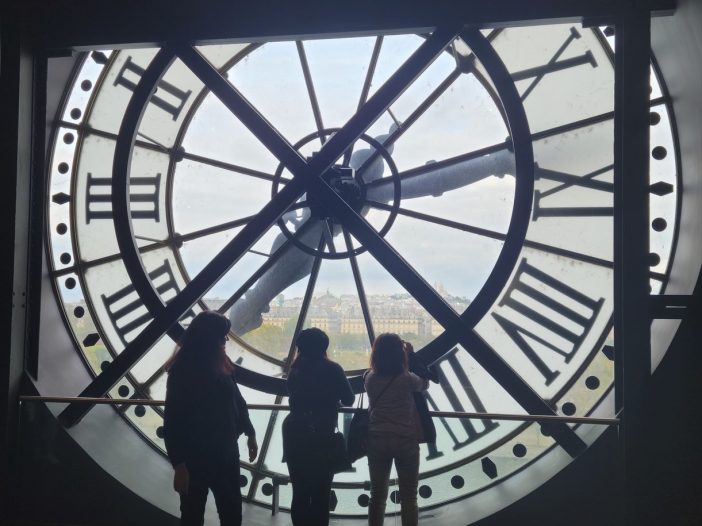 Musee d’Orsay on left bank of Paris’ Seine, is one of our favorite Paris museums. It is a beautiful building as it used to be the Orsay railway station. But more importantly, it has a superb collection of Impressionist and Post-Impressionist masters. While we wish the art layout and signage were better, it is still a must-see stop for this magnificent collection.

The museum has a huge, superb collection of a group of Impressionist artists, particularly Monet, Renoir, Cezanne, Caillebotte, and others. These artists were initially shunned by the Salon and forced to stage their own exhibitions and find more open-minded dealers to sell their works. The museum traces the evolution of their works through the late-1880s when the group broke up and some of its most influential members began to evolve their styles.

Then came the advent of Neo- or Post-Impressionism.

This led to “Synthacism” in which artists such as Paul Sérusier produced vividly-colored flat areas separated by dark outlines. Others, including Odilon Redon used abstraction, unrealistic colors, settings, and random arrangements to create impressions of a dream-like world.

Over the years, we have been to many special D’Orsay exhibits that combine their own and borrowed collections. Here are some of them

Edvard Munch was primarily a Symbolist who sought to represent ideas with metaphorical images (for more, see our post on Oslo’s Edvard Munch Museum). He worked in cycles, often returning to previously addressed themes, and created several versions of the same subject.  The 100-work exhibition primarily consisted of paintings, but also included several drawings, prints, and engravings that spanned his entire 60-year career. It suggested his influence on the subsequent Abstract Expressionist movement.

The exhibition began in the artist’s mid-20s with a trip to Paris when he was exposed to and heavily influenced by Impressionism, Impressionist subjects (especially intimate portraits), and techniques. This resulted in a series of psychological self-portraits and explorations of emotions ranging from love to anguish with big doses of self-doubt mixed in. Anguish and despair were exposed in the late 1890s with what would become the first of many representations of his iconic “The Scream” and others with tormented faces, bridges, and red sky.

He took on a cycle of life, love, and death in his late 1890s-1900s series of“The Frieze of Life”. The premature death of his sister and a couple of painful love affairs deeply affected him resulting in a number of his works focused on death and dying. This included “Sick Child”, his haunting portrayal of courtship in “The Dance of Life” and a cynical perception of women who entangle and entrap men—an image symbolized by their long hair in a number of works and in a few cases as vampires. On the other hand, he also produced a series of drawings that emphasize the spiritual bonds between people.

He also tackled other obsessions including the growing anxiety over contemporary turn-of-the-century life and the recurring themes of loss and self-doubt. He did these while revisiting and making variations on some of his familiar themes and motifs such as the use of wood-like grains and cross-hatching. He experimented with engravings and became deeply engaged in theater, as in illustrating programs for Ibsen and Strindberg plays and viewing and portraying himself as versions of some of the characters.

Toward the latter part of his career and life, he created a number of large decorative works and began to deal with his own approaching death.

Yan-Pei Ming: A Burial in Shanghai

Another D’Orsay exhibition focused on the French-Chinese artist Yan-Pei Ming. Ming was deeply influenced by French Realist Gustave Courbet’s “A Burial at Ornans” who showed an everyday funeral as a heroic event on a large canvas. Ming represented his mother’s funeral in a similarly magisterial way, but on three, huge canvases.

The first canvas, “Celestial Mountain” represents a dreamlike vision of the afterlife in a semi-abstract, expressionistic style. This is followed by the adoring, representative portrait of “My Mother” as a monumental-sized tribute and the solemn “The Farewell” as a precisely detailed portrayal of the service.

Edgar Degas at the Opera

This huge, very crowded exhibit effectively celebrated the 350th anniversary of the Paris Opera with roughly 200 pieces by Edgar Degas who was virtually obsessed with opera. He used it as a laboratory that allowed him to focus on and represent all types of scenes and activities. His works included the audience, the orchestra and conductor, the on-stage action, and especially, his passion, what went on backstage and between performances. He portrayed people and objects from straight on, from above, from below, and from any other perspective he could dream up.

Degas focused on dancers, their bodies, their attire, their positions, and especially their movements. He represented them in meticulous sketches, watercolors, pastels, oils, photographs, and monotypes. He created hundreds of sculptures too. Interestingly, “Little Dancer Aged 14”, a composition made with a combination of wax, human hair, and textile, was the only one that was publicly shown during his life.

The exhibit showed a broad range of all of his representations. While most of this work examined the effects of different lighting conditions, many of his later works focused on the “synthesis of the female body” and different ways of expressing its movements and rhythms. He increasingly did this by showing sequences of motions on the same canvas: sometimes in charcoal, sometimes in pastels, and increasingly in paroxysms of unreal and imagined colors.