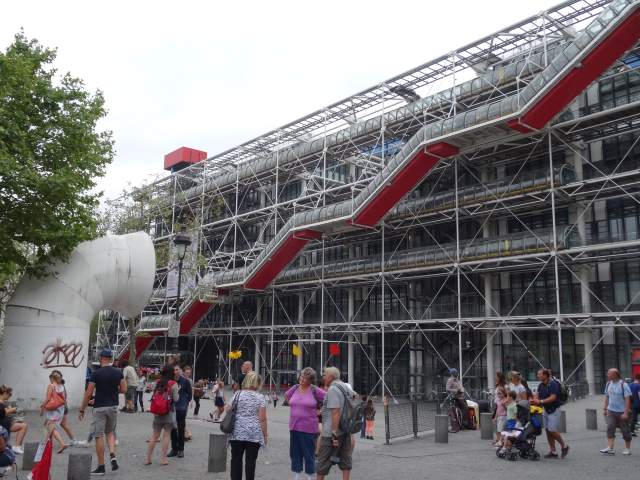 The Pompidou Center is, depending on your view, either a piece of art itself or an eyesore. The reason?  The building’s infrastructure is on the outside for all to see rather than being buried in the building’s bowels. The public sees its skeletal supports, escalators, elevators, air, water, and power ducts. And if this weren’t enough, each element is painted in bright colors to ensure it gets your attention. Not that this is entirely an attention-grabbing gimmick, though. There is also a practical reason as it opens the interior to maximize the possible viewing space.

It needs all this space to accommodate its modern art collection of the 20th century. It provides a high-level review of the most significant artists and movements of the last hundred years, ending with pieces from the last few years. Artists include Matisse, Picasso, Miro, Calder, Pollock, Lichtenstein, through many more artists between and after these masters. And this is not even to mention all the research and restoration facilities, the administrative offices, and so forth contained in the structure.

But before you even get inside, you are distracted (pleasantly) by street performers and by the fun at the Stravinsky fountain.

The History and Foundations of Modern Art

The most important part of the museum’s permanent collection covers the primary artistic styles and schools that emerged between 1905 and 1960. An overview that began with a few works by Kandinsky, Chagall, and Roussault suggested how these artists presaged the century’s long-term trend toward abstractionism.

It then provided a high-level overview of the most important (and some of the lesser important) approaches to art that helped to reshape how all types of artists, architects, and designers have viewed and represented the world (not to speak of ideas, senses, and emotions) and art ever since.

The richest parts of the displayed collection were those of the two most important and influential artistic movements of the century moving away from the literal portrayal of objects to communicate ideas and emotions. These were:

The museum also provides a nice representation of Surrealism, returning to the importance of Kandinsky and others’ growing use of color rather than figures to express spiritual ideas and ideals.

It then shows the Bauhaus school’s approach to functionalism, which stripped away extraneous elements and details to focus on the function of a building or a piece of furniture, or the idea being conveyed in a painting. While this movement was led by Walter Gropius, it depended heavily on teachers including Paul Klee and again, Kandinsky.

Other Schools of Art

It then briefly explained and portrayed work representative of a number of other less influential, less long-lasting movements. Constructivism provided commentaries on consumerism and mass production. Kinetic art represented a movement in still images. Nouveau Realism was a brief inter-war return to semi-realism. Fluxus is art that changes the use of pre-made objects.

The museum is less comprehensive in its treatment of a few schools that arguably merit more attention. For example, Pop draws somewhat on fields including Constructivism and Fluxus, Abstractionism and especially Abstract Expressionism.

The Pompidou also has a lovely outdoor sculpture pool that features the work of Jean Arp.

Although we have a couple of minor qualms with how the Pompidou handled the history of modern art, we appreciated the sequencing and the explanations of, and the connections it drew among different artistic movements. We found a number of interesting pieces and appreciated some of the cataloging of approaches to contemporary art. Yet the display appeared to us to be somewhat random.

True, much of the work provided some form of social commentaries, such as around the evils of war, torture, and persecution. Yet some of the distinctions the museum posed among History, Archival, and Documentary Art were lost on us. Many of them, at least by the selection, if not necessarily the representation of the subject led us to think of them as Activist Art, which the museum presented as a distinct category.

Nor could we fully appreciate the John Cage-inspired Sound Art. However, we did enjoy Olafur Eliasson’s exploration of light and color. We also appreciated a few of the different exhibits that explored the confusion of image and reality and the artistic manipulation of truth, as with perspective and the digital manipulation of images. For example, a Valerie Belin exhibition of photos of super-models that made them appear almost like mannequins. And some images of Michael Jackson made one question whether they were real representations of manipulations. At the opposite end of the gallery, another exhibit, that portrayed familiar urban scenes with all of the words and lettering removed, makes one question the source of the information we get and the relative ease of manipulating a viewer’s impressions and ideas.

We also appreciated the conflicts and contrasts inherent in images of traditionally attired Iranian women holding relatively contemporary consumer goods and appliances, such as boom boxes and vacuum cleaners. And, while we didn’t have a clue as to the true meaning, we also enjoyed Wilfredo Prieto’s “Avalanche”. Dozens of balls (often with some type of commercial symbol or meaning) were arranged in a long line from the smallest, to the largest, as if they progressively accumulate mass (and presumably some type of commercial manipulative effect) as they aggregate.

We enjoyed a number of works that ranged from entertaining (such as Ben’s “Ben’s Store and Dubuffet’s walk-in cave) to haunting (especially Erna Rosenstein’s recollection of an escape from a WWII Jewish Ghetto). Others, like Apostolos Georgiou’s untitled painting, combine pathos and humor in a single work.

But just because you’ve finished admiring or despising the building and exploring the exhibits inside, does not mean you’re done. A visit would not be complete without a visit to the Brancusi Workshop. This studio reconstruction contains over 200 of the artist’s sculptures (primarily works in progress) and tools, along with thousands of photos (a few of which are simultaneously on display) in four rooms. While it is interesting, we would have preferred to see a handful of the artist’s finished works.

This special exhibition consists of roughly fifty of Bacon’s primary pieces from the last 20 years of his life. Most paintings focused on how authors and books provided inspiration and imaging for his often disturbing works. And given that these works include the tragedies Aeschylus, Nietzsche’s nihilist philosophy, and themes of disillusionment, despair, and death in T.S. Eliot’s “The Wasteland”, it’s hard to imagine that his works wouldn’t be disturbing. Particularly after sitting in the six listening rooms in which passages from these books are being read and then exploring galleries with wall-to-wall images of disfigured bodies and faces, writhing bodies, blood, and gaping, screaming mouths.

On one visit, we saw a large temporary exhibition on Mona Hatoum. The installation examined how politics and society exercise control over individuals and the connections and conflicts among these forces.

We couldn’t get excited by many of the works, such as a video of a colonoscopy or the photo of a sheep testicle hanging in a butcher shop. But we did find some of her works to be interesting. These included a map of the world created with acrylic blocks, a globe with the continents formed by neon lights, and her Van Gogh’s Back, a photo of a man’s back with long hair shaped as the flows of light in the artist’s “Starry Night” painting.

Art That We Particularly Enjoy

Rather than going through the entire museum, sometimes, we just wander through those pieces that we particularly enjoy or find especially intriguing. Among these were Fauve-like paintings from Picasso, as well as from Matisse, Chagall’s blending of turn of the 20th-century Russian rural heritage and religion, the humor of Picabia’s Adoration of the Calf, Giacometti’s mysterious woman at a table, Henry Lauren’s image evoking a melting woman, Cesar’s colorful mix of compressed scrap metal, Anselm Kiefer’s tank of rusting submarines (railing against the inevitability and futility of war) and the Niki de Saint Phalle’s acerbic parody of sculptures of beautiful women.