Paris France is one of those places to which we frequently return. In fact, we have spent more time here than in any other non-U.S. city. This time we only had 3 days in reacquaint ourselves with some of our favorite museums. Rather than repeat or rephrase all that we have written before, this post references previous posts and focuses on new discoveries at Paris museums.

The highlight of L’Orangerie are the eight huge murals that Monet left to France in honor of the men who died in WWI. Our 2015 post gives more background on these murals). On this visit, much of the museum’s exhibition space was closed in preparation for a new exhibition. But it did have had an exhibition based on the collection of art critic and gallery director Felix Feneon. Feneon admired the scientific basis, the technical rigor and the sensual colors of the Pointalists (a technique of painting in which small, distinct dots of color are applied in patterns to form an image) and championed the work of a number of Neo-Impressionists, especially that of George Seurat. He organized major shows of the works of Seurat and Signac, and the first public exhibitions of Matisse and, in 1912, works of the highly controversial Italian Futurists—a group whose work was so controversial that a fist fight broke out at its opening. 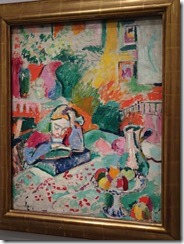 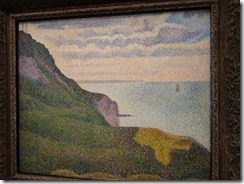 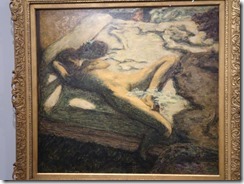 Musee d’Orsay is on the left bank of the Seine. It one of our favorite museums for its beautiful facility (it used to be the Orsay railway station) and its superb collection of Impressionist and Post-Impressionist masters. But it is also one of our most disliked museums due to its confusing layout and poor signage.

Adding some of our own interpretation to the indecipherable layout, we think the layout is intended to begin with an overview of the early- and mid-19th-century Romaticists (such as Delacroix and Ingres and Emil Levy), sculptors and the artists of the French government-sponsored Salon (including Eugene Carnere, Jons-Karl Huysmans, Emile Verhaeren), and Post-Impressionists, before eventually embracing some such as Renoir and Vuillard.

The museum’s highlights are its huge, superb collection of Impressionist works with particularly strong representation of Monet, Renoir, Cezanne, Caillebotte and others. The exhibit begins with these artists’ early years, when they were shunned by the Salon and forced to stage their own exhibitions and find more open-minded dealers to sell their works. It traces the evolution of their works through the late-1880s when the group broke up as some of its most influential members began to evolve their styles. It traces:

Then came the advent of Neo- or Post-Impressionism:

This led to “Synthacism” in which artists such as Paul Serusier produced vividly-colored flat areas separated by dark outlines. Others, including Redon used abstraction, unrealistic colors, setting and random arrangements to create impressions of a dream-like world.

Yan-Pei Ming: A Burial in Shanghai. The French-Chinese artist, deeply influenced by French Realist, Gustave Coubet’s “A Burial at Ornans”, showed an everyday funeral as a heroic event on a large canvas, represented his mother’s funeral in a similarly magisterial way. This time, however, on three, huge canvases. The first, “Celestial Mountain” represents a dreamlike vision of the afterlife in a semi-abstract, expressionistic style. This is followed by the adoring, representative portrait of “My Mother” as a monumental-sized tribute and the solemn “The Farewell” as a precisely detailed portrayal of the service.

Degas at the Opera. This huge, very crowded exhibit effectively celebrates the 350th anniversary of the Paris Opera with roughly 200-piece exhibits of an artist who was virtually obsessed with opera. He used it as a laboratory that allowed him to focus on and represent all types of scenes and activities, from the audience, to the orchestra and conductor, to the on-stage action and especially, his passion, what went on backstage and between performances. He portrayed people and objects from straight on, from above, from below and from any other perspective he could dream up.

Degas particularly focused on the dancers, their bodies, their attire, their positions and especially their movements. He represented them in meticulous sketches, in watercolors, in pastels, in oils, in photographs, in monotypes and in hundreds of sculptures where interestingly, “Little Dancer Aged 14”, a composition made with a combination of wax, human hair and textile, was the only one that was publicly shown during his life.

The exhibit shows a broad range of all of his representations. While most of this work examined the effects of different lighting conditions, many of his later works focused on the “synthesis of the female body” and different ways of expressing its movements and rhythms. This was increasingly done by showing sequences of motions on the same canvas: sometimes in charcoal, sometimes in pastels and increasingly in paroxysms of unreal and imagined colors.