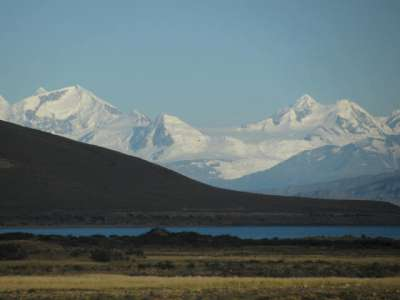 We have seen glaciers from land and sea, gone to glacier museums, landed on them from helicopters, drove on them in special all-glacier terrain vehicles, walked on them and trekked on them with crampons. But, for some strange reason, we are always anxious to see and experience new glaciers in new ways. And, since we had never been to Patagonia (and are probably not likely to go again until we end up doing our anticipated, but not yet planned trip to Antarctica (Patagonia is the site from which voyages to Antarctica begin), we thought this was a good time to go.

Since our South America trip had already been stretched to over three weeks, we only had a couple days to devote to Patagonia. So, we decided to fly from Buenos Aries (a three hour flight) and from there to Mendoza (which, unfortunately takes a full day, since we had to go all the way back to Buenos Aries to reach Mendoza).

Although we were looking for more of a challenge than offered by traditional boat trips or 4×4 excursions, we were looking for less than the 7 hour hikes (4 of which are trekking on ice) that, without special dispensation, are open only to people aged 18-45. (Besides, after our struggle hiking and rock-climbing our way to the top of Rio’s Sugarloaf, we were a bit gun-shy.)

So, we decided on a compromise. We signed up with Hielo & Aventura for a mini-trek. The trek began with a drive through the sparse, but beautifully rugged Patagonian landscape. 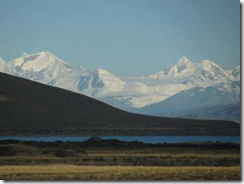 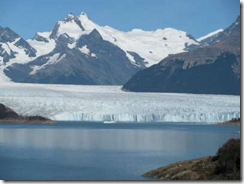 A great experience. After the 50 km bus ride, we arrived Los Glaciares National Park (a UNESCO World Heritage Site) and the primary viewing area for the 257 sq. km Perito Moreno glacier. The park has a great viewing facility for the 5 km glacier face, which rises up to 60 meters above the lake and another 110 meters down below the surface. A network of several km of elevated metal grate trails and viewing balconies allows you to see the glacier from all different angles and elevations, from panoramic overviews to a looking up from just above lake level. 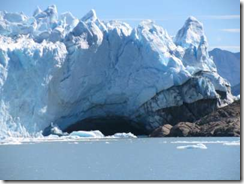 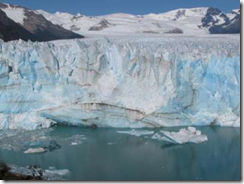 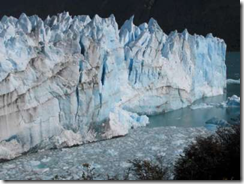 That, however, was only the appetizer. We next took a boat across the lake to the side of the glacier. After lunch (with a great view, of course), a half hour walk and a stop to don our crampons, we began an all-to-short 1.5 hour trek up and down the glacier, with plenty of opportunities to: 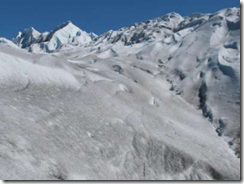 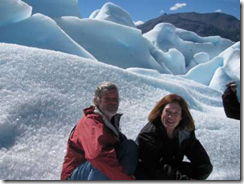 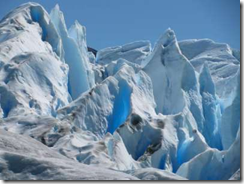 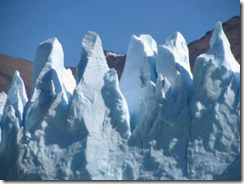 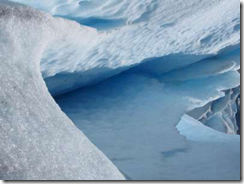 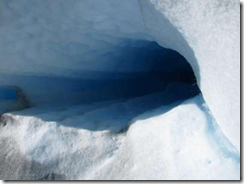 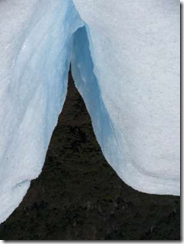 Pictures of rivers and waterfalls

Although we certainly enjoyed our first glacier trekking experience in Whistler Canada, this was far superior, with much more varied walks, much more impressive views and much deeper crevasses. And this is not even to mention our seeing of multiple calving events, including the largest we have ever seen (and we have seen quite a few).

But what’s it like trekking on a glacier with crampons? At first, it is a bit awkward and you are nervous and cautious with your footing. But after 15-30 minutes, it becomes second nature. Walking is easy and you have total (and from our experience, totally justified) confidence that the crampons will hold. The only things you have to worry about are:

Both are big no-nos, since you absolutely do not want to fall on jagged and sharp glacial ice. Other than that, relax, take in all the views and have a great time.

One thing you do not have to worry about is getting cold. While the ice ice certainly cold, the sun is warm in the summer (about 75 degrees F). We each wore a light shirt, a light Marino wool jacket and a waterproof windbreaker and a pair of gloves (more in case of falls, than for the cold). We were unzipping in less than a half hour.

To Do in El Calafate

Trips to the Perito Moreno Glacier begin in the town of El Calafate Argentina. The late 1990’s completion of the airport was instrumental in more than doubling the town’s population and turning into tourist resort and apparently (although we saw little evidence of it) a South American jet-set hot spot (even the country’s president now owns a vacation home in the town). But, while there are many opportunities to see or otherwise engage with the glacier, or do some serious hiking or fishing, the towns offers relatively little to do. After all, unless you are shopping for outdoor clothes, you can spend only so much time looking at souvenirs and El Calafate tee shirts.

Sightseeing options are generally limited to the Nimez Laguna Nature Reserve (nice for bird watching), a local history museum (which we did not do), or the recently opened Glaciarium. This facility explains, shows a 3D movie of and otherwise celebrates glaciers and allows you to engage in your own celebration in an ice bar. (Although we were tempted to do this, after hearing a review from our hotel, and learning that it was more than a $40 round-trip cab ride from town, we decided to pass.

This, we were told, is THE asado (barbeque) restaurant to go for Patagonian lamb. While I was anticipating a grilled rack or roasted leg of lamb, the moment we walked in, I realized that I was in for something totally different. Right behind the entry, in a glassed in room with a wood fire pit stood three lamb carcasses on skewers. They were being smoked, before being placed on a grill and chopped into smaller chunks. 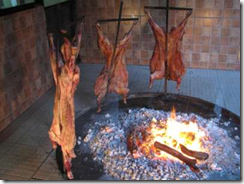 The result was a huge portion of very tender, smoked, grilled (and, by definition, overcooked) lamb with a wonderful taste. Joyce, meanwhile, took advantage of another Patagonian specialty, a large, lightly grilled local trout with lemon sauce. A tad dry, as grilled trout is prone to be, but quite tasty. When I requested a Malbec/Cabernet blend, the host recommended a 2009 Lindaflor Petite Fleur Malbec blend with Merlot, Syrah and Cab. Very nice, even with the trout.

This is a casual restaurant that offers pretty much any type of food that anybody may want–exactly the type of place we typically avoid. But, there aren’t that many options for lunch. Besides, it was recommended highly by our hotel and the restaurant was filled. So we gave it a try. We began with a sampling of two empanadas–a chicken a corn. The chicken wasn’t bad, but neither were anything to write a blog about.

Although we weren’t planning on pizza, it seemed that everybody and their brother had either ordered one or was picking one up to take out. Our seafood pizza was loaded with mozzarella and had a sampling of shrimp, scallops, mussels and calamari. Okay, but certainly not memorable. The meal did, however, give me a chance to temporarily break my increasingly severe Malbec habit by trying a local beer–a Patagonia Amber Lager. Although not an ale, it was pretty good.

We saved the most fun for our last night in El Calafate. Los Amigos is a family-owned restaurant, off the beaten purist track, that causes primarily on seafood. Since the menu was all in Spanish (and we did not know the local names used for many of the fish, and the owner/server did not speak English, we described basically what we we’re looking for and asked for his recommendations. Our first dish, Gambas Al Ajillo (shrimp and mushrooms in a light tomato cream sauce over rice) was delicious. So to was the main course, Morluzo Negra (which we guessed, and later confirmed, later confirmed is Patagonian Toothfish–aka Chilean Sea Bass) a la Salsa Verde (a light cream sauce with Spanish and herbs). We had these with a 2011 Postales del fin del Mundo Chardonnay).

Although the owner/server was very friendly. The fun began when a new person arrives at the tale next to us. A friend of the owner and chef in his own right (who once served as a guide and cook for one of Tony Bourdain’s adventure, he spoke just enough English to engage us, and to ensure that we had fun. He then brought another couple, two Uruguayans (both also with a modicum of English) who were visiting El Calafate for the first time, into the conversation. Although we only understood about half of what was going on, we had a great time–and yet another interesting and, at least for us, late Latin American evening.