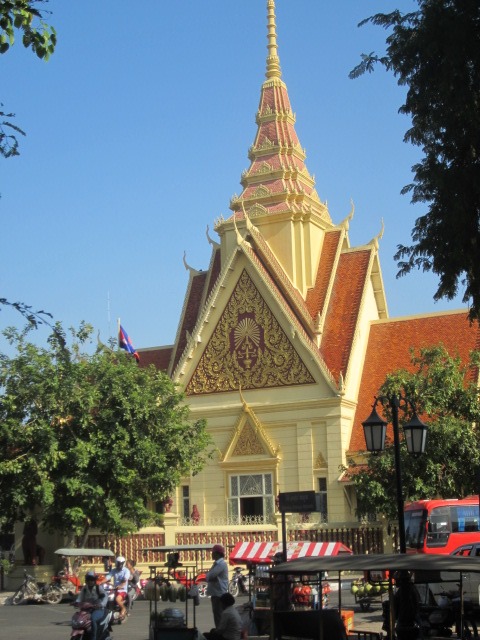 On our last trip to Cambodia, we didn’t make it to Phnom Penh. This time, we decided to experience it. This 3 million-person city has had one of the most turbulent histories of any major city on earth. Located at the intersection of two large rivers, it has long been a commercial center. It has also been at the center of wars, coups and other horrors since the Indochine wars that began in the early 1950s.

Although it had a population of only about 600,000 in the early 1970’s American bombing of the countryside forced farmers to take refuge in the city, resulting in a surge to 2.5 million in 1975. America’s departure generally opened the door to Pol Pot, a genocidal maniac who, in a bid to turn Cambodia into a rural, communist, agrarian society, forced a mass evacuation that turned the city into a virtual ghost town, with a population of about 60,000.

People began returning to the city after a Vietnamese invasion removed Pol Pot and his Khmer Rouge army from power, but some people and many businesses fled again after a 1998 coup.

These decades of war and genocide took their toll, certainly on the people; but also on the city’s buildings and infrastructure. The Khmer Rouge destroyed almost any building associated with religion (which it outlawed), education (which it viewed as unnecessary in an agrarian society and dangerous to its own power) and to the previous government. The city’s basic infrastructure was neglected, cannibalized and fell into disrepair.

So while people have been returning, the city was a shambles. Worse, the architects, the engineers and the skilled workers who may have been capable of rebuilding the city, had been executed or had escaped the country. It has taken a couple of decades, and a lot of foreign money and talent  (especially Vietnamese and Chinese) to restore the city. New buildings, including some modern high rises, along with more modern interpretations of colonial buildings, are being built from scratch. Meanwhile, some of those colonial buildings that haven’t been irrevocably damaged or torn down and replaced in the name of progress, are being restored.

Still, Phnom Penh does retain some of its old colonial majesty. Among the primary examples are the:

But the most important of Phnom Penh landmarks are those associated with the genocide and the horrors of the Pol Pot museum which we cover in the next blog.