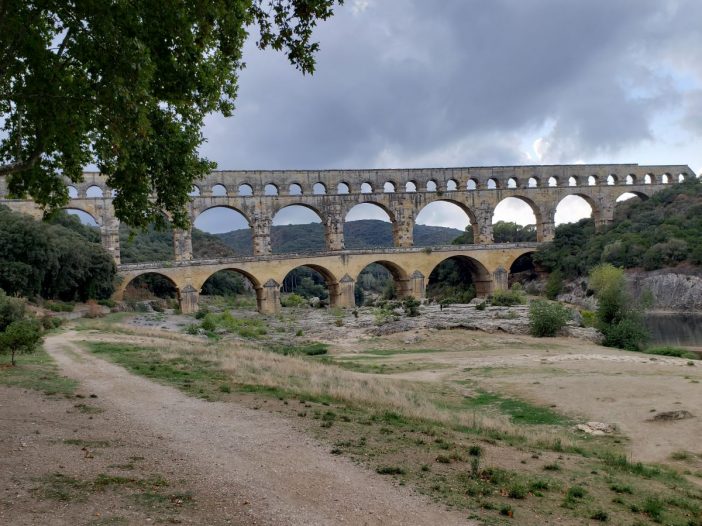 Pont-du-Gard is a dramatic, three-tier Roman aqueduct bridge that was built in the first century AD to carry water and provide transit across the Rhone River. Located in southern France’s town of Vers-Pont-du-Gard (between Nîmes, Uzès, and Avignon), it is renowned as the tallest of the Roman aqueducts. It is also one of the best engineered and one of the best preserved.

Pont-du-Gard was mostly constructed without mortar or clamps. It has three tiers of arches made of limestone and is the only three-story antique bridge that is still standing. Six arches are on the bottom layer, 11 in the middle layer, and 35 arches on top. This UNESCO site was so well engineered that water flowed at an average grade of  .39 inches in 598 feet over 30 miles to reach the city of Nîmes.

The aqueduct carried water for five centuries. It fell into disuse after the collapse of the Roman Empire and as the lack of maintenance resulted in clogging from mineral deposits.

But it was so well built and maintained that it continued to be used as a toll bridge until the 17th century. It could have lasted still longer if it weren’t for the looting of many of its stone blocks for other construction projects. Twelve arches have been removed from the dramatic yellowed (from oxidized Sulphur) structure.

From Flowing Water to Flowing Tourists

In the 18th century, the Pont became a tourist attraction, even for monarchs. Throughout the years it periodically underwent regular maintenance and renovation efforts. By the 1990s the Pont du Gard had become such a hugely popular tourist attraction that it was congested with traffic that was still allowed to drive over the bridge and tourist shops.

A significant renovation completed in 2000 closed the bridge to vehicle traffic and turned it into a pedestrian zone. A museum was built to give further insight into the bridge’s history. Today it is one of France’s most popular tourist attractions.

Today, one can view the structure from different perspectives. You can also walk upon and cross the bridge. When the circular steps are open (which they weren’t when we visited) you can climb to the base of the second tier. An uphill path provides an eye-level view of the cut-away (from one of the removed arches) of the water channel atop the third level.