Port Gibson is a small town in Mississippi. While it was not a particular destination on our radar list, we drove through it when we were going from Vicksburg to Natchez Mississippi.

The town has an impressive County Courthouse and some nice churches. Along a small section of the relaxing, scenic tranquil Natchez Trace, it also has an ancient Indian path. Settlers took this over as a walking and horse path. It served as an economic, social and military transit corridor to link the remote outpost of Natchez with Nashville and Memphis in an area which was sequentially controlled by French, English and Spanish. It was also used by merchants and keelboat crews who had floated down to New Orleans, to return north. (Since ships without their own propulsion could not return upriver, they were dismantled in New Orleans for their timber and crews and those wishing to return north had to find another means). 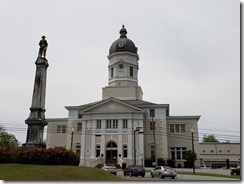 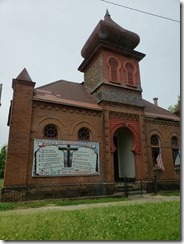 Our primary stop in Port Gibson, however, was at Emerald Mound. The Indians built this huge, eight acre, 60 foot-tall earthen mound as a burial and ceremonial site. While the mound is one of hundreds that Indians built along Eastern trade networks, it is the second largest in existence. They built the mound by shaping an existing hill over hundreds of years. This required moving tons of dirt in baskets and skins to the top of what became a tiered earthen pyramid with a flat top. The mound, topped by a wood and clay-plastered temple that was used for religious and ceremonial purposes. Very interesting and spiritual stop. 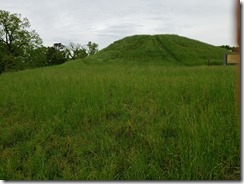