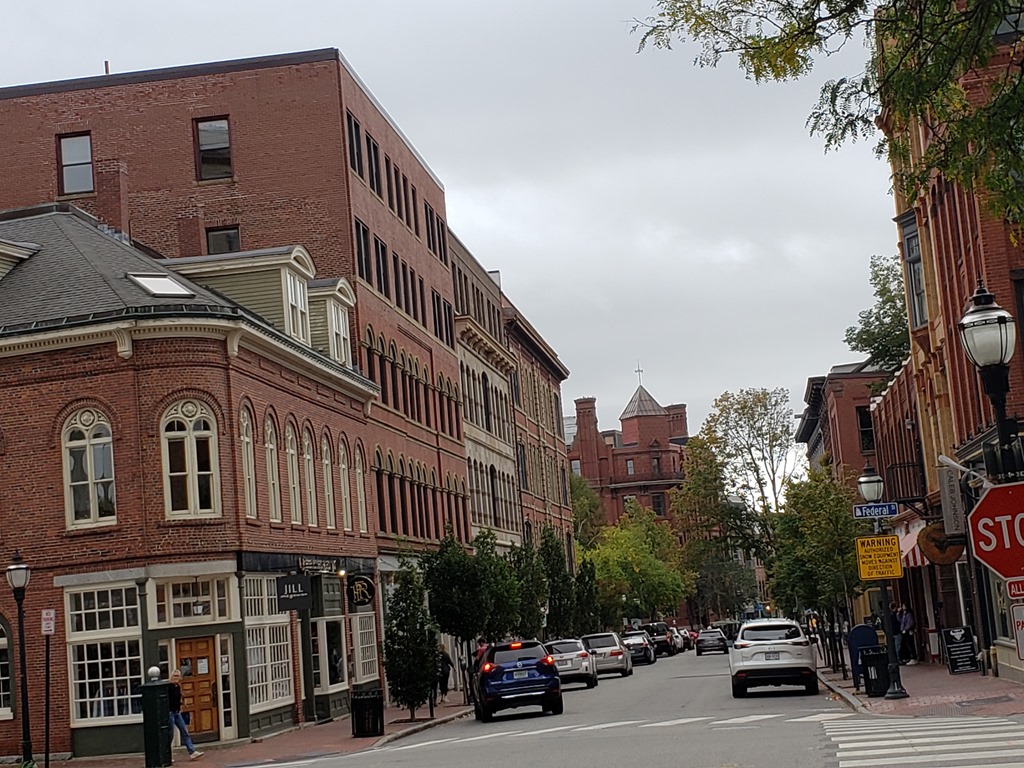 Portland Maine is a lovely small city with a nice museum and great restaurants. We love walking through the lovely historic (and much gentrified) Old Port historic area that is filled with restored brick buildings or down Commercial Street, which was built on old piers in the 1850s. While some of the old (but mostly renovated), warehouses are still there, large modern apartment and condo complexes and some of the city’s largest and most popular new seafood restaurants are now evident in the area, providing formidable competition to the 40-year old deMillo’s Restaurant.

Get Outside of the Historic District

But don’t limit yourself to just the historic district.

And if you happen to be there on the first Friday of the month from April to October, visit Portland’s east side art’s district First Friday art walk.

Another lovely place to walk in Portland’s eastern esplanade. This greenway is between a road and the city’s harbor. Along the several-mile walk are lovely natural and manmade sites. The natural attractions included the esplanade, the harbor with its pleasure craft anchorage, and the rolling hills on the other side of the harbor. The manmade landscape included the park’s many sporting fields and courts, its playground, a historic narrow-gauge railway museum, and, across the road from the esplanade, a line of huge, beautifully-restored, Victorian-era ship owner and sea captain’s homes.

And check out some of the beautiful older homes on the west esplanade.

Cape Elizabeth is a suburb south of Portland.  It was founded in 1615 as a fishing and farming settlement. Today it is home to one of the state’s more iconic lighthouses that is the oldest in continuous use in the country. Fort Williams Park in which the light is located has a cliffside walking trail that provides lovely views of the alternately sandy, marshy, and rocky coastline. It is also home to the 1872 fort and battery, a bandstand and food truck (for lobster rolls and more).

Meanwhile, Two Lights State Park, which is literally around the bend from the Portland Head Lighthouse, has its own eponymous lighthouse and a\coastal walking trail.

The Portland Museum of Art

The Portland Museum of Art is a very nice, small regional museum. Its permanent collection provides a high-level survey of American and European art from the late 19th century to the present. It has a small, but particularly nice selection of early 20th century American works by artists including Winslow Homer, George Bellows, Rockwell Kent. Gilbert Stuart and Sargent. Its impressionism collection contains works by artists such as Renoir, Matisse, Degas, Cassat, and Hassam. A handful of contemporary American works were also displayed.

On our fall 2021 visit, the museum had two special exhibits:

The Portland Institute of Contemporary Art

The Portland Institute of Contemporary Art is a small gallery. During our visit, it had a single exhibition, “Monitor”, which consisted primarily of video art. It examined different aspects of digital surveillance, data analysis, and retention.

The Portland Art Gallery exhibits contemporary Maine artists in a well lite space on Middle Street. While the art they have changes, we often see interesting wood pieces and a number of interesting rock sculptures.

OK, the Salt Cellar is not an art gallery, but we were intrigued by this store that sells objects made of salt. For example, it has large salt crystal lamps, whose bulbs were inserted in the hollowed-out crystals. But a warning, these lamps may “weep” in humidity and even melt in water.

Our list of where to stay in Portland Maine is small as it reflects only those places where we have stayed (and that are still open). Both are in the historic area as that is the area in while we spend most of our time.

This hotel is our newest find is one that we will definitely return to. For those who are not aware of Autograph Collection hotels, they are a group of independent hotels that Marriot has pulled together. We’ve stayed in several of them and have found them to be unique and comfortable places to stay. The Press Hotel is no exception. It is in the old Portland Herald newspaper building (hence the name). The newspaper theme is throughout the hotel. Our large king room was very spacious, complete with bathrobes, a lovely shower in the bathroom, and a refrigerator. Like other Autograph hotels we have stayed in, the room does not have an in-room coffee pot…which we find strange. But the front desk was accommodating in our request for a hot water pot for our room so that we could enjoy tea in the morning without having to get dressed and go downstairs. The location was fabulous and easy walking to everything we wanted to do. We also found on-street free parking a few blocks away.  The only negative was the hotel’s bar, which had a very poor selection of wine and its scotches were very expensive. That aside, one can find other bars in Portland. We highly recommend this hotel.

The  Portland Regency is a historic repurposing of the city’s armory. We enjoyed its common areas and comfortable, nicely sized rooms. It is also in Portland’s port district, just blocks from some of the city’s best restaurants and hottest bars.