Even though I really enjoyed St Petersburg on my first visit in May, I never expected to return only six months later. But I’m glad I did.

This time, Joyce and Joyce’s brother (who lives in nearby Clearwater) were with me. After spending Sunday afternoon at an art festival, the Morean Art Center, Glass Studio and Hot Shop and exploring galleries (we particularly enjoyed (and bought a lovely glass art bowl at) the Shapiro Gallery on Beach Drive, we arrived at the Museum of Fine Arts in time for a tour by an extremely knowledgeable docent and a brief visit to the Stories & Symbols exhibition of Dutch and Flemish Art. We concluded this day of art with a brief return visit to the fun Dali Museum, where Joyce’s brother used to be a docent. 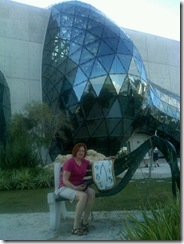 A day exploring St. Petersburg art worked up an appetite. After re-exploring the restaurants along Beach Drive, we again *like on my previous visit) settled on 400 Beach Seafood for grouper sandwiches and a couple orders of stone crab claws.

We prefaced dinner with oysters and wine at the Central Street Oyster Bar, followed by dinner at 400 Beach Seafood. We then broke a cardinal rule. Although we always explore different restaurants rather than returning to one to which I had previously been, we returned to 400 Beach for dinner. Why? We asked two knowledgeable people at our hotel (the Bayfront Hilton) for restaurant recommendations: first for the best seafood restaurants, and the other for the best restaurant, period. Both said 400 Beach was the best. Another reliable source, the director of the Shapiro Gallery then confirmed the recommendation. This left us no choice but to return. We really enjoyed the ceviche, the Grouper Oscar and the linguini with shrimp and mussels, with a bottle of Morgan Unoaked Chardonnay.

After dinner, we took another stroll along the city’s two main streets—Beach Drive and Central St. We were surprised by the nightlife, at 10:00 on a Sunday night. The outdoor restaurant tables were filled, the bars were hoping and the galleries were still open.

So much for our preconception of St. Petersburg as a lazy retirement community.

Overall, yet another fun experience in a city that we had never previously even considered visiting. It was especially nice as a preface to our manatee experience, about an hour and a half away in Crystal River.