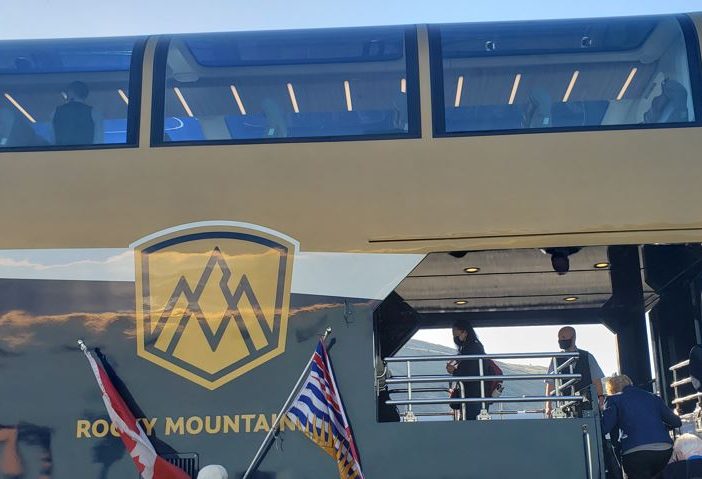 We rarely take organized tours of areas. Instead we prefer to plan our own itinerary and timing. But once in a while, we sign up to be taken care of. What better place than in the Canadian Rocky Mountains? Instead of one of us driving or navigating, we could take a train and both relax and enjoy the scenery.

We had taken a train across Canada from the Rockies to the Pacific, long before there was a dedicated tourist train. We decided that it was about time to revisit that adventure but this time, in grand tourist class, via the Rocky Mountaineer.

We chose the two-day trip that goes from Banff to Vancouver. We spent the daylight hours on the train with an overnight stop at a hotel in the town of Kamloops.

The Trip Starts in Banff

After covid postponed the trip for 2 years, it finally was on again. We traveled to Banff (Alberta Canada) where we met up with the Rocky Mountaineer team. We are not sure if it was a staffing issue or poor planning. But we spent the evening before our train in a mandated poorly resourced check-in and ticket pick-up process that required an hour wait in line. Not a great start.

A bus picked us up the next morning at our Banff hotel to take us to our train (our luggage was taken directly to the evening’s hotel in Kamloops). While the process again seemed a little disorganized, once we were on the train, things smoothed out.

The Rocky Mountaineer has 2 levels of service. We chose the more expensive Goldleaf Service. This level provided:

Then there is the food. Although we didn’t see menus for other classes, our food service included breakfasts and lunches in the dining car and regular snacks served at our seats between meals. Breakfasts had a selection of six dishes, from cheese and spinach soufflé and eggs benedict to fruit plate and granola and fruit. Each of the four breakfasts that we sampled over the two days was properly cooked and quite good.

Lunch also offers a choice of six dishes including: healthy mushroom, grain, and vegetable-based power bowls; steelhead salmon; beef shortrib,s and a huge pork chop that was impossible for one person to eat.

We also had snacks at our seats. Snacks began with pre-breakfast pastries and progressed through trail and nut mixes. After lunch was a cheese course. Later we had a plate of spinach samosas.

And let’s not forget that passengers get unlimited beverages, including alcohol. We had a choice of six Okanagan Valley wines (not to speak of two additional Okanagan wines served with an afternoon snack of Canadian cheeses), BC craft beers and ciders, and a range of spirits and cocktails—all beginning at 9:30 AM!

Although we were impressed by the service and much (although certainly not all) of the food, we were here for the views. And the views, especially through the Rockies, Hell’s Gate, the Cascades, and the Pacific Range are magnificent. Except for those times when tall trees or tunnels blocked the scenery, these views are virtually non-stop. Even some of the tunnels have frequent open spaces which, when going around curves, provide views of the rest of the train as well as the spectacular volcanic-created, glacially-scoured mountains, lush forests, glaciers, rushing rivers, lakes, and gorges that made the construction of the tracks such a long, tortuous process.

Although staff provided commentary about each view, one could also track each site via trackside mile markers. The markers coordinated with a map in a 24-page tabloid that confusingly lists and describes a number of the primary sights. Several of its articles explain the history and building of the railway (completed in 1885), the gold rush, the histories of the First People, the role of the Chinese in building the railroad, the flora and the fauna that one sees along the route in different sections of the journey, and much more.

Day One: Banff to Kamloops

After being picked up from our hotel at 7:00 AM, we were taken to the train station, boarded and set off for a brief stop at Lake Louise to pick up more passengers. Our train car was divided into 2 shifts for breakfast on the first level of our coach car.  This was followed by several hours of sightseeing, a two-shift lunch, and more sightseeing (not to speak of snacks and continual drink service).

Although we will spare readers most of the explanations and stories behind many of the sights, the first-day journey passes dozens of particularly impressive and interesting sights. These include:

We arrived in Kamloops (British Columbia) at about 8:30 PM due to a delay while we had to let a freight train use the train tracks. A bus took us to our hotel where our luggage was already in our rooms.

Kamloops was originally a native trading center. It became the first European fur trading post and home to a succession of forts beginning in 1812. It was also home to one of the country’s most notorious Residential Schools which tore young indigenous children from their families to be “Westernized”. The last of these schools was finally closed in 1996 after discoveries of children buried in mass graves–including 215 at the Kamloops school.

Due to the delay in arrival, our “exploration” of the 90,000-person city was limited to a brief walk through downtown and the next morning, a bus ride from the hotel to the train.

Day Two: From Kamloops to Vancouver

The second day of the trip is very different but equally rewarding. Our route began in a hot, dry, desert-like environment (the Kamloops area is one of Canada’s warmest and driest regions) with few trees, sparse grasses, and plenty of sagebrush. The area next to the hoodoo-lined shoreline of the large Kamloops Lake has only slightly more vegetation. But while the land may not seem particularly inviting to us, the bighorn sheep, eagles, and osprey seem to be right at home. This includes the osprey family that has used and continued to expand the same nest for more than 100 years.

Among the more interesting sites were:

Overall, Day 2, while interesting, was a bit of a letdown from Day 1. The views were somewhat less dramatic. More importantly, many views, including of premier sites like Hell’s Gate, are often limited or even fully blocked by trees.

Our trip ended in the beautiful city of Vancouver. A bus took us to our hotel where we planned to stay for several additional days in one of our favorite Canadian cities.

Hints For If You Go on the Rocy Mountaineer

What to see and do in Vancouver