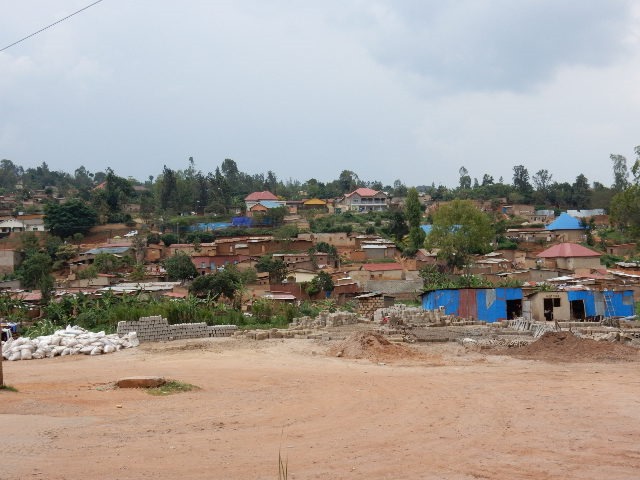 We had last been in Africa in 2003 when we visited South Africa, Botswana, Zimbabwe and Zambia. It was our first safari experience and an incredible trip (and before we started writing a blog). We decided that it was time to revisit this wonderful continent and to see new things. This is the first of multiple blogs on our African adventures.

First up on this trip was a Rwanda gorilla trek. After twenty-six hours of travel from San Francisco (thank goodness we could snag first class travel rewards), we landed in Rwanda’s capital city Kigali, a million-person city that is one of the cleanest, least littered city we have been in. After debarquing the plane, getting our temperatures scanned (due to the Ebola outbreak in western Africa) and going through customs, we had a short 15 minute cab ride to our hotel Mille des Collines.

We chose this hotel for its location, its reviews on TripAdvisor and its history as it was the center piece for the Hotel Rwanda story during the terrible genocide period (discussed later). You pay a premium for staying here for that history. In hindsight, we should have chosen a different place. But after 26 hours of travel, we welcomed the comfortable clean room and bed. The hotel is not luxurious, and frankly is overpriced. Anything to do with the front desk takes an incredible amount of time…which we couldn’t figure out if it was their computer systems or the people.  It is obviously an older structure, but reasonably maintained. However, the towels were a bit worn and we had issues with the air conditioning in 3 different rooms. For the first night, we couldn’t regulate the temperature. It took about 20 minutes and 3 calls to get someone to help while they found the engineer. Our second night’s stay in another room had an air conditioner that didn’t work so they moved us to another room. Fortunately the air did work there. We did eat dinner there one night and it was….not very good. We suggest you look elsewhere but it was late and we just wanted to eat.

But things picked up from there when we were picked up the next morning by a wonderful guide, Runigamugabo Emmy (emmy@pumbatoursandsafaris.com) to start our exploration.

The City of Kigali

Kigali is relatively modern million-person city with major expansion plans, and amazingly traffic-free streets. The most notable traffic consists of motorbike taxis that roam every section of the city. 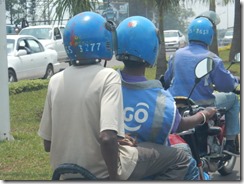 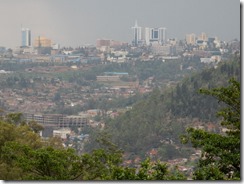 We made two museum stops that focused on Rwanda’s harrowing genocidal past. These were the:

How could a country, whose people who had lived peacefully together and even intermarried for decades, come to such a state? Although there is no easy answer, the museum puts much of the blame on the shoulders of the Belgian colonialists who devised the often arbitrary distinctions between Tutsi (those who owned 10 or more cows) and Hutus (who owned less) as a means of consolidating their own power–and also on the French, who supplied many of the Hutus’ weapons. The genocide, although it did not formally end until 2004, is, while painfully remembered, almost ancient history in a country in that has, under an admittedly somewhat authoritarian government, made tremendous progress in healing its wounds and reuniting its citizens. As if seeing all this explanation and documentation of this suffering weren’t enough, we talked to a person who experienced this terrible time in Rwanda’s history at age 16. His mother, a nurse, was called into the hospital for duty, only to be thrown into a pit latrine and stoned until she died–all within the sight of his then eight year-old sister who was beaten and left for dead (although she later recovered). His father died shortly after the peace, from injuries he had received. With a group of friends, our contact spent two weeks walking through the Northern Provinces forests until reaching the border of Burundi, where he rode out the rest of the war in a refugee camp. He, like millions of his countrymen, is trying to forget the past, forgiving those who committed these atrocities. It was amazing that we didn’t sense any hard feelings, only a need for people to learn from this time and not repeat it.

The Road to the Northern Province

We then left Kigali for 2.5 hour drive through the mountains and Northern Province to our lodge at the Volcanoes National Park, the Sabinyo Silverback. This fascinating drive went through the countryside where cars and even motorbikes are rare. This, however, doesn’t mean there weren’t people. We passed hundreds and hundreds of people–men and women (although women far outnumbered men as a result of the war), children and adults, in traditional and Western clothes (although it was primarily older women in traditional attire). 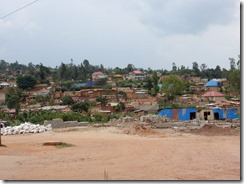 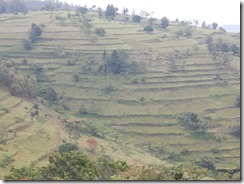 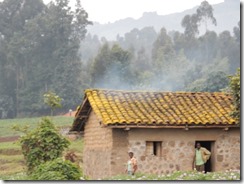 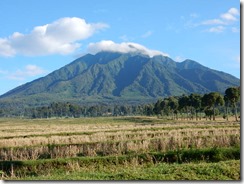 Most were carrying something. Yellow water containers are ubiquitous as a means of carrying water from roadside pumps to their homes, some of which had to be carried hundreds of meters up steep mountains, virtually all of which were planted with crops grown at impossibly steep angles. (Running water is very limited outside the cities.) Many more, however, were carrying things on their heads–packages of every size and shape, packets of bamboo (which they would use for fences or stakes to hold plants), grass to feed to their animals (since grazing land is so sparse and legally limited) and even 50 or 100 kg sacks of home-grown Irish potatoes they were taking to markets located several kilometers away. And then there were the more wealthy farmers who could afford the roughly $150 cost of a basic bicycle. They loaded two or three 100 kg sacks onto bikes that they pushed to market. Wealthy to afford a bike? Yes. In a country with an average annual per capita income of only $632, a bicycle is well beyond the reach of a small farmer, the good news, however, is that these farmers produce enough food that everybody has enough to eat. 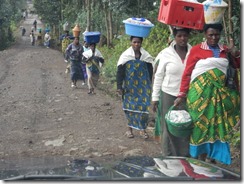 True, Rwanda’s economy has been growing at an 8 percent rate for the last several years, but it is still a poor country where, despite the relative affluence of the city, most people still live on subsistence farms. This poverty was particularly evident on the incredibly rough dirt roads we took to the starting point of our first gorilla trek where we passed dozens of small farm villages. But, while poor, people were well dressed, friendly and from what we saw and were told, very hard working. Then on to our real destination and next blog….gorillas.