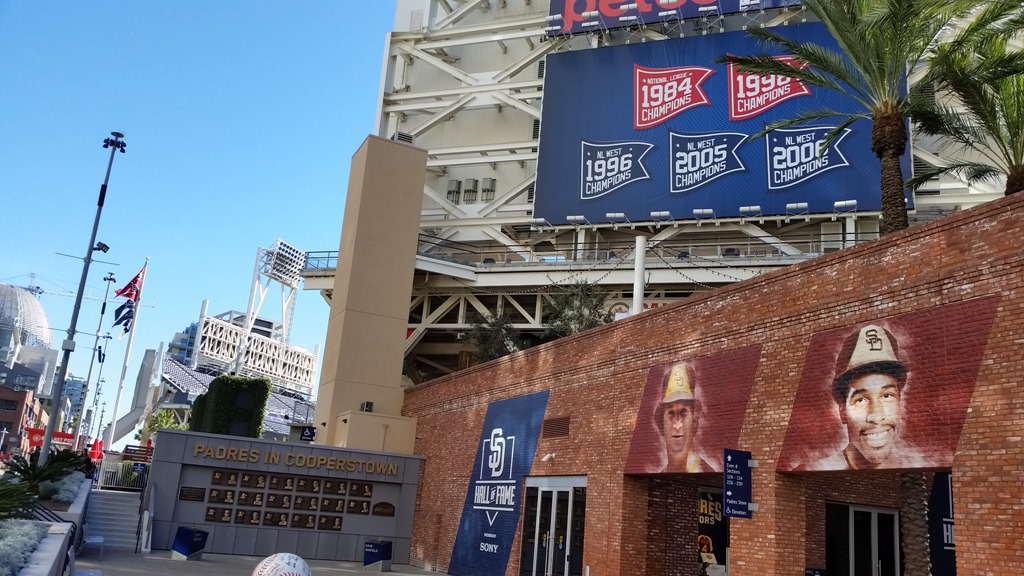 San Diego California in on the Pacific Ocean coast and is next to the United States–Mexico border. Since it was the first site where Europeans settled on the west coast, it is called the Birthplace of California.

San Diego has lots of interesting neighborhoods to keep a visitor occupied.

The Gaslight District is technically a 14-square block historic area in the center of San Diego’s downtown area.

Petco Park, an urban baseball stadium,  marks the eastern terminus of the quarter. It provides a convenient base for pre- and post-game dinners and partying. The park, meanwhile, is flanked, on the other side, by a park and by the city’s large, lattice domed Public Library. The west side of the quarter, meanwhile, is marked by Horton Plaza, a large shopping mall and open plaza in the center of downtown.

The quarter is also home to hundreds of renovated 19th-century buildings that now house many of the central city’s restaurants. Some of the 1880-90-era gems include the Greely, Odd Fellows, and Yuma Buildings and especially the magnificent, twin-towered Louis Bank of Commerce building. 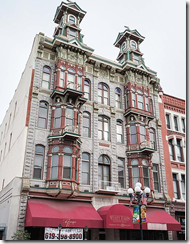 In the evenings, the Gaslight Quarter is alive with the sound of music! If you have ever spent an evening walking New Orleans’ French Quarter and Faubourg Marigny districts, you certainly recall the experience of hearing live music (especially jazz) emanating from every other doorway. How to choose between the (typically) no-cover establishments to pop into for a drink while enjoying a music set. Evenings in the Gaslamp Quarter are like this, albeit without the open carry of alcohol (and other things), the beads, and, for the most part, the drunken revelry.

Still, a saunter through the Gaslamp District makes it very easy and tempting to stop in front of the dozens of bars with live music, begin tapping your feet, and heading inside to enjoy more. The opportunities are many—more than a dozen bars along six or so blocks of Fifth, Sixth, and their side streets. Among our favorites are the casual, craft draft beer-focused popular music of the Tin Roof and the more jazz and blues-focused Patricks Gaslight Pub, with its ample selection of whiskeys, vodkas, and other liquors.

The harbor is generally divided among Navy ships, yachts, and private crafts. It is fronted by a long esplanade and is lined, in various places, by:

While at the Harbor, don’t miss the USS Midway Museum.  It is a wonderful floating museum that vividly portrays the history of and life aboard a reconditioned, 1945-era aircraft carrier (the largest built to that time) that was retired after serving in the Korean, Vietnamese, and Gulf War. The self-guided audio tour was accompanied by extensive descriptive panels and informative docents to answer questions. We explored three decks. The Landing Deck is where the primary wartime action occurs. It has about a dozen and a half fighter jets and helicopters plus live presentations describing operations of the plane and munitions elevators, the catapult-based launch system, the wire-based landing system, and the roles of the different types of specialists who manned the deck.

The Hanger Deck is where planes were stored and maintained. It currently displays about a dozen planes (all with explanatory panels), model cockpits in which you can sit, and flight simulators. This deck is also home to the critical Command Information Center, which houses the ship’s surface craft and plane radar systems control rooms and in which sailors track locations, speeds, courses, and identifications of all neighboring and approaching sea and aircraft. A docent explained that pre-sonar, the ship relied primarily on helicopters dragging sensing buoys (which could only ping immediately below) to detect submarines. This deck also houses the ship’s radio center, enlisted men bunks, captain and junior officer quarters, and many exhibits explaining the types of jets (especially F-8 Crusader fighter jets) and helicopters (especially AWS) and more recently, reconnaissance planes (especially AWACS) that were housed on the carrier, the ranks, uniforms, and insignias of the various men (all, at that time, were men) who manned the ships and the planes and much more. 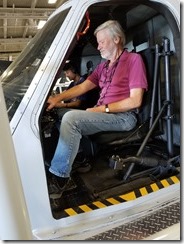 The Mess Deck, includes the galley (kitchen), enlisted men and officer mess (dining rooms), the brig (prison), and supply rooms, all with descriptions of how each operated. We could go below to the engine room and a number of display areas. We explored a display of the history and current state of aircraft carriers, including the new, state-of-the-art Gerald F. Ford-class carriers. These carriers displace 112,000 tons (compared with 45,000 for the Midway), has 25 decks, is powered by a nuclear reactor and is so automated that it requires fewer sailors (4,295) to operate it.

A personally-guided tour took us up into the ship’s tower (aka “The Island”). This multi-deck command station includes the bridge (where the captain, deck officer, navigator, and four junior officers) man the ship, the flight control station where the “Boss” coordinates all operations surrounding takeoffs and the “Mini” coordinates all landings. Our guide explained the roles of each of the individuals, and the pace and dangers inherent in complex operations ranging from the docking and at-sea resupplying of the ship through flight deck processes where takeoffs and landings can occur at 60-second intervals and in which jets are launched at 140 miles per hour and land at 170 miles per hour on a ship that is often moving at an angle to the plane, in rough seas. She also took us through the “Chart Room” and described the challenges inherent in navigating, and how even current GPS systems must be backed up with traditional, manual, celestial navigation.

Overall, it was a very impressive ship, a fascinating tour, and contained very informative displays.

This multi-block neighborhood, aligned along three streets, is centered on Indigo Street. The roughly six blocks are virtually lined with popular restaurants, including some of the hottest reservations in the city. People packed the area on Saturday afternoon when we were there, and cars were bumper-to-bumper. Boutiques occupied those few spaces not occupied by restaurants. And Salt & Straw ice cream had around-the-corner lines. The neighborhood also has some interesting Italian food shops, such as a homemade pasta shop and the comprehensive, attractively displayed selection of foods at the upscale Roma Urban Market.

This huge park, with several elaborate buildings, was originally designed for 1915-16 Panama-California Exhibition. It has a virtual monopoly on the city’s cultural attractions. These range from art, history, and science museums, through theaters and ballet and symphony venues, Japanese and European gardens, and of course, one of the best zoos in the country. We barely scratched the surface of the park with stops at:

Just strolling along El Prado is also fun. Stroll by the beautifully laid-out and landscaped plazas and listen to the scores of local museums playing for tips.

We barely scratched the surface of all that San Diego provides. We had to pass on such large museums such as the Museum of Art and the Marston House and Gardens (both of which we visited on another visit), The Museum of Man, Mingei International Museum, Museums of Science, Natural History, Air & Space and several other more specialized ones. Nor did we devote what is effectively a full day to exploring the Zoo, which we previously visited. But even with all these omissions, it was still a wonderful way to spend the better part of a day.

Old Town is a reconstruction of the oldest European-settled area in the state and is the most visited of all California parks. It has numerous museums plus reconstructions of original 19th-century homes, adobe haciendas, stores, schools, blacksmith shop and so forth.

North Park, which is (surprise) north of Balboa Park, is a craft beer haven. Although the main street of University Ave is pleasant enough, the neighborhood itself consists primarily of moderately large, low-rise apartments near University, followed by smaller apartments and then single-family homes further away from University. Tom, however, found the craft breweries and tasting rooms to be very interesting. Although the choice was tough, he selected a tasting room at the Second Chance Brewery where he sampled a flight of their IPAs and ambers. He especially enjoyed the amber and the special Hazed IPA, where he really could discern the papaya in the tasting notes, although not the blackberry.

Bankers Hill is a generally mixed, middle-range, and upper-income residential neighborhood just north of Little Italy. It includes an elective mix of homes, including a few huge, late-19th-century Victorians, 1940s-60s-era homes, and small gingerbreads and large, contemporary glass and concrete mansions sitting side-by-side. A commercial district lies atop the hill, in the center of the neighborhood.

Bario Logan is a transitional neighborhood, some of whose buildings show clear signs of gentrification, but whose residents, at least judging from

Coronado Island traces its development back to the 1850s when a group of investors bought the island for $110,000,. They began building the massive, beautiful Hotel del Coronado (aka, “The Del”) beach resort. Then they subdivided the rest of the land and began promoting and selling residential lots (with cash incentives for building, rather than holding for speculation). The Del, one of the largest wooden buildings in the world, is situated on one of the country’s best beaches, with sand like talcum powder. This visit (one of a number), coincided with a visit by Sandcastle Man, who builds and maintains extravagant sandcastles in the hopes of attracting tips.

Beyond the Del is the Coronado Yachting Club and along the Strand, a line of modern, upscale residential towers. Heading east from the Del, the island’s small commercial district (along Orange Ave), an island filled with tasteful small apartment buildings and single-family homes. The eastern edge is lined with a park and walking trail that offers superb views across the harbor to the San Diego skyline.

Ironside Fish and Oyster, in Little Italy, is not at all Italian. It is, however, very good. We managed to score a Saturday evening, outdoor, sidewalk-side seat at this ultra-fresh, ultra-local sustainable seafood restaurant. We loved the rich, uni scramble toast, liked the Octopus a la plancha with chorizo, olives, and sherry, and were reasonably satisfied with stone crab cakes. We chose a bottle of French Chablis from the minimal wine list. While dining, we enjoyed a ringside view of the continual stream of people and cars along India Street.

Water Grill is the only place in the U.S. outside Florida where we ever found fresh Stone Crab Claws (jumbos, nonetheless) and outside Alaska where we ever found fresh king crab claws. These wonderful dishes, combined with a somewhat disappointing uni toast, made for a very satisfying (if somewhat expensive) meal—a meal made all the better with a bottle of 2015 1er-cru Domaine Sequinot-Bordet Fourchanne Chablis.

Oceanaire (now closed) was another Gaslamp Quarter seafood restaurant, where we had two very good appetizers: Chesapeake Bay-style crab cakes (in which backfin crab was the only filler) with mustard mayo, and shrimp and grits with Cajun butter sauce. Our wine was a lovely 2013 1er-cru Les Vallons Chablis from Albert Bichot.

Sally’s Fish House is a lovely, indoor/outdoor spot overlooking the harbor’s private craft. We had a generously-sized lobster roll (which included plenty of large chunks of meat) with chili aioli and a crab club sandwich that combined a fried softshell crab, king crab salad, and avocado on a rich, brioche roll.

Leroy’s, on Coronado Island offers an eclectic menu of small plates. Although we were very disappointed by (and indeed, returned) the pan-fried yellowtail (dry and tasteless) sandwich with slaw and remoulade, we thoroughly enjoyed two other dishes: Ahi tuna poke tacos with Napa slaw and spicy cream sauce, and manila clams with bacon and spinach and toast in Rockefeller sauce.