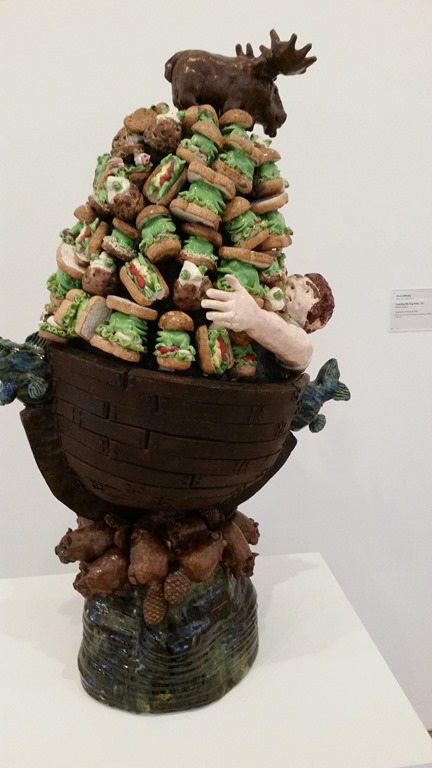 Most of San Francisco’s art oxygen is rightly being consumed by the May 2016 reopening of the fabulous SFMOMA (see our blog on our visit). But, as spectacular as the museum and the addition of the huge Fisher Collection is, this is but the tip of the Bay Area modern and contemporary art scene. The premier alternative collection in the area is located about 35 miles south, on the Stanford Campus.

The Anderson Collection at Stanford

The Anderson Collection consists of 121 mid-century modern and contemporary pieces that are displayed in a bright, inviting purpose-built gallery. The work, which was donated by Harry and Mary Anderson, founders of the country’s largest college food-service contractor, provides a well-organized and curated collection of modern and contemporary art that spans many styles.

Although we had preciously enjoyed the Collection, this trip included a docent tour that greatly enhanced the experience and helped establish perspective among the various, sometimes quirkily, but descriptively-named sections of the exhibition. These include:

The permanent collection was complemented with separate display of perception-bending works by Robert Irwin that altered perception of space, borders and light.

This, however, is only the largest and of the Bay Area’s “satellite” displays of modern and contemporary art. Wine country, for example, offers a number of viewing options. This is especially true in Napa Valley.

Although few would choose to visit Napa Valley specifically for its art, it is, as we discussed in a 2014 post, home to some very good galleries and collections. Clos Pegase, for example, used to have a lovely collection of modern art, before it donated it to U of C Davis. Others, such a Hall, still have great collection, both at its lovely Rutherford estate and its modern new St. Helena facility—which is now marked by a giant, stainless steel rabbit that virtually leaps onto St. Helena Highway. There are, however, two permanent art venues which should not be missed by anyone interested in modern and contemporary art. These venues are:

Union Square and the area around Ghirardelli Square have been the long-time homes of San Francisco’s primary modern and contemporary art galleries. The city’s premier modern photography collection, meanwhile, is housed at Pier 24.

The reopening of SFMOMA, however, has helped spawn a new modern art renaissance around the museum with the opening of world-class galleries such as the New York-based Gagosian Gallery and the relocated, soon-to-open San Francisco-based John Berggruen Gallery.

Nor can one forget the emergent Dogpatch gallery district that is developing around the pioneering work of the Minnesota Street Project, which has so far attracted 36 studios and 12 galleries to a complex that offers far lower rents than are available in other SF art centers. And speaking of lower-cost spaces, don’t forget the galleries opening in the Tenderloin (such as the Jessica Silverman Gallery), Mid-Market (FrankelLab) or the Mission (as with 500 Capp Street and Ratio 3.

But, if you are looking for select modern art exhibits within the context of larger displays of more traditional art, don’t forget new exhibits at the DeYoung (modern artist Ed Rushca’s representations of the Great American West) and the Legion of Honor with its upcoming, complementary Wild West exhibit, with its display of a wide range of artistic representations of the American west and its development.

And then, of course, there is what promises to be the extraordinary collection of ancient Chinese Masterpieces from Taipei’s National Palace Museum that will soon open at Asian Art Museum. The Emperor’s Treasures exhibit, which will include more than 150 priceless paintings, ceramics and jades that rarely leave Taiwan, including half of which that have never before been seen in the U.S.