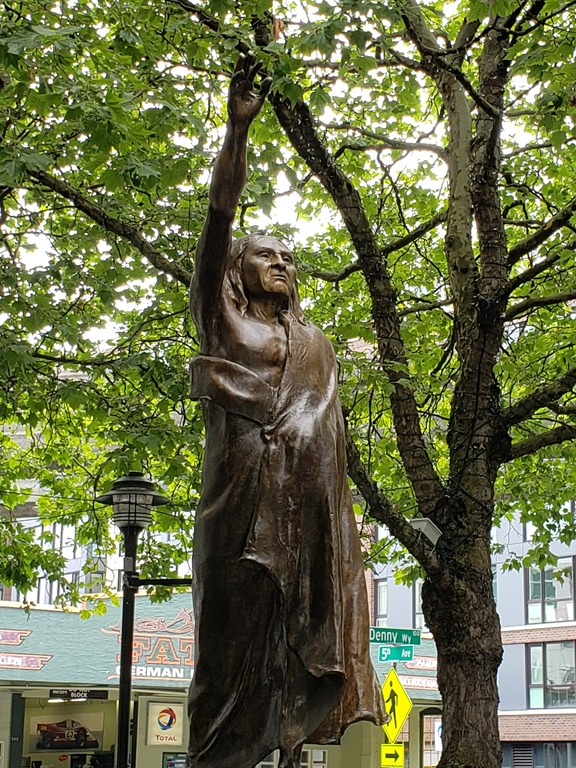 Although we are fairly familiar with Seattle’s most touristy areas and we have walked and explored all of them and many of the neighborhoods on our own (see our blog on Seattle neighborhoods), we decided to get an objective refresher and more insight into Seattle’s history via  Seattle Free Walking Tour. The tour began a few blocks North of Pike Place Market, proceeds through the lower blocks of downtown and through the historic, somewhat rundown Pioneer Square area where the city was founded. It turned out to be a fascinating tour with interesting historical detail and trivia combined with a fun and enthusiastic presentation.

Although current day Seattle had been home to the Native American Duwamish tribe for centuries, Europeans discovered it and the Puget Sound via a 1792 voyage by George Vancouver. Fur traders began venturing into the area in 1811. However, it was the 30-person Denning Party that first settled it in 1853. The Duwamish, led by Chief Seattle, accommodated and established good relations with the settlers who finally persuaded the chief to lend his name to the new village in return for a payment to his people. One can see a statue of the Chief near Pioneer Square. 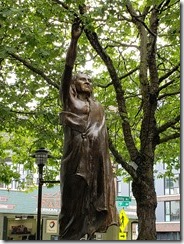 This cooperative relationship lasted through the initial growth of the city to about 30,000 people in five years. The Duwamish worked as relative equals to whites until settlement to the south was fought by another native clan. The Hudson Bay Company worked to put down this opposition partly by purposely spreading diseases that were already killing a large number of natives. After the 1856 Battle of Seattle, the U.S. government abrogated an existing treaty and tried to impose a blatantly unfair treaty on all Native Americans, including the Duwamish. When Chief Seattle refused to accept it, the government banished the natives to what is now Bainbrige Island. “Doc” Maynard of the original Denning party, paid for the support of the Duwamish for two years.

Seattle’s initial growth boom came in 1849 when the California Gold Rush created a boom for lumber in San Francisco. Lumberman flooded into Seattle to cut the region’s Douglass fir trees resulting in a ratio of 70 men for each woman. The city partially addressed this unhealthy, not to speak of unsustainable, imbalance by sending Asa Mercer to Boston, Lowell, and later to New York. His mission was to recruit women (the so-called Mercer Girls) from secretarial and nursing schools with the promise of careers and a choice of a husband.

Seattle’s second big growth surge came from another gold rush in the Klondike. Seattle was the closest real city to the Alaska goldfields. It emerged as the primary source of supplies for stampeders hoping to strike it rich. The city also benefited from frequent long delays when prospective miners had to spend winters in Seattle before setting off to Alaska in the spring. A number of Seattle merchants sought to “double-dip” by opening stores in Skagway to sell supplemental goods and to replace those when loaded horses toppled from the aptly named Deadhorse Pass.

Seattle benefited from San Francisco’s need for lumber to rebuild after its 1906 earthquake. And since San Francisco produced little in those years, the returning ships were filled with bricks from collapsed buildings as ballast. Seattle used these bricks to rebuild after its 1889 fire and to pave the streets of the growing city. You can see many of these bricks today at Pike’s Market.

The 1889 Seattle fire began in a furniture factory (which is commemorated in an obscure monument) due to a series of errors by a new immigrant employee. It spread to a neighboring liquor warehouse whose alcohol fed the flames. It then spread to a hardware store that had a huge stock of shotgun shells. The shells exacerbated the fire that ultimately destroyed 98 percent of the city but resulted in not a single death.

Since the city had to rebuild from scratch, it laid out a plan to address a longstanding problem. The most desirable land by the waterfront was so low that sewage pipes (which had to be built above ground), continually backed up at very high tides. To fix this, it planned to raise the waterfront 14 feet by leveling two of the cities hills to use for fill. But since reconstruction had to proceed before the soil could be moved, the first floors of the new buildings were built as basements with work and living quarters beginning on the second floor. (These old first floors are now the nexus of another popular tour of Seattle’s Underground Tours.)

Many of the buildings built during this period in Pioneer Square served as prototypes for new buildings across the city. The subsequent demolition of one of these (the Times Square Building) led to the city’s current preservation laws. Another, the still functional Smith Tower, built in 1919 by one of the owners of Smith & Wesson (firearms) remained the tallest building on the West Coast (484 feet) until Space Needle was constructed for the 1962 World’s Fair. 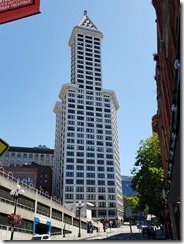 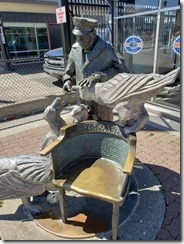 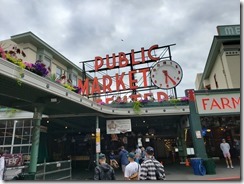 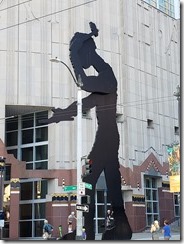