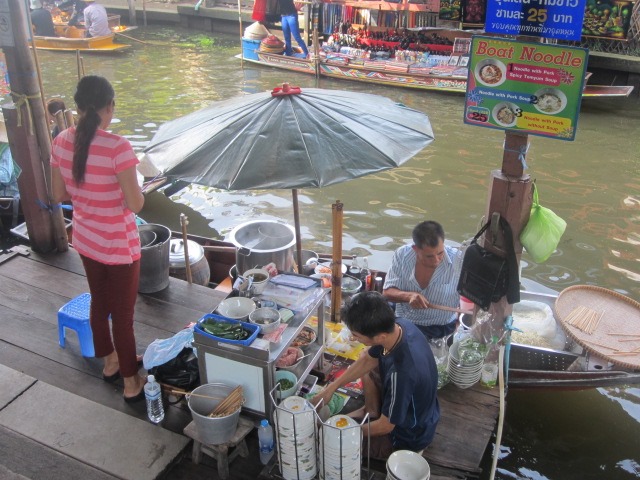 We both love to walk in new cities. Although it can become challenging dodging bikes, motorbikes, cars, trucks, buses etc. all come at us from all directions, it does give us a chance to see things better than if we were in a car or bus ourselves. The problem is that we can only cover about 10-15 miles when walking on a good day. A better way to cover a larger area is on bike. We engaged Bangkok Cycling Tours (www.Bangkok.com/Cycling-Tours) for a Damnoen Saduak Floating Market Tour.

Our morning began by van, which took us to the start of our bike trip, the floating market. We had been here on our last trip to Thailand and remembered the great time we had being on a 2 person boat, navigating through the market, and negotiating to buy a puppet for our cousin (and then going back and getting a second puppet for a person who worked for us). We were looking forward to revisiting the scene. As always, things have somewhat changed.

King Rama V created the Damnoen Saduak canal (or klong in Thai) by having people dig it out by hand,  to expand agriculture and how entire communities and cultures gradually grew around them. We walked along some of the klongs (especially Klong Lad Plee) in which real, non-touristy floating markets that are still being used. These markets entail vendors paddling past homes and stores and stopping when people were interested in buying or trading for the merchant’s wares–primary fresh fruit, vegetables and fish. We were surprised at some lovely homes along the canal and were especially fascinated watching  men hand-carving a lovely rail for a deck. 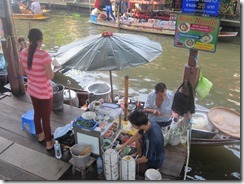 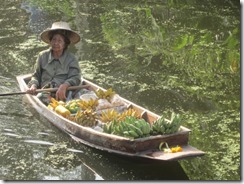 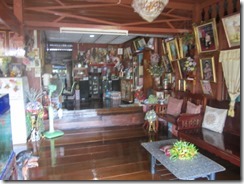 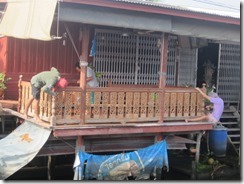 Then on to the main section.  Although the market is intended to represent a slice of everyday life in old Bangkok, the current incarnation of the market is clearly designed primarily for tourists and plays few of the commercial or social roles of the original market. Despite its somewhat staged effect, we still enjoyed watching the crowds of boats, the range of produce, prepared food and tourist goods and experiencing the general vibe. 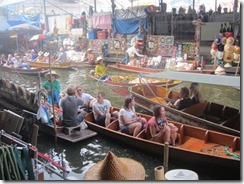 We then hopped onto a long-tail boat for a ride among a number of klongs and then onto the Mekong River for a 45-minute cruise to Wat Nang Kae Noi, where we saw its wonderfully hand-carved teak walls that told the story of the Buddha.

Then we mounted our bikes for a short ride to Wat Bang Kung, a 400-year Wat that, similar to Anghor Wat, has become overgrown with trees and vines. And, since this province is not far from the border with Burma (who attacked Thailand more than 30 times–and captured it twice) the area around the temple is filled with a number of martial artifacts, such as statutes of Thai warriors honing their fighting skills and of Chinese soldiers that helped Thailand defend itself against the Burmese.

Then back on our bikes for the first 15 km ride in which we passed hundreds and hundreds of smaller klongs that were used to irrigate crops of all types of tropical fruit: fruits including papaya, mango, lychee, pomelo and lots and lots of banana trees. Bananas are, in fact, so abundant that they can be purchased for about five baht (15 cents) per bunch. 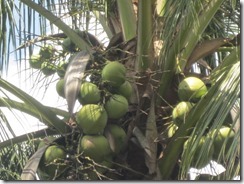 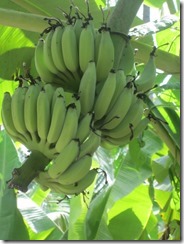 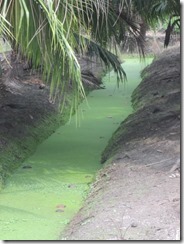 But for the abundance of all these crops, coconut is the big cash cow and comes in 2 varieties: tall trees whose nuts are used primarily for their meat, and smaller trees whose nuts are used primarily for their juice. This, however, just the start of the coconut’s value, coconut flowers produce hearts of palm and palm sugar (kind of like a dense brown sugar that is used in a lot of Thai foods), husks are used for compost and mixed with soil for planting flowers and the thin layer of meat next to the husk is used to produce biofuel. We stopped at one of dozens of small coconut factories to watch the very labor-intensive process of harvesting the meat (which yields about 3 tenths of a cent per coconut divided among the farmer, the picker,  the factory and the workers). This being said, large factories buy specialized equipment to automate the production process and some growers are employing monkeys (who work for bananas…seriously) as an alternative to tree-scaling humans to pick the fruit. Just imagine the trauma of telling your friends that you have been replaced by a monkey! 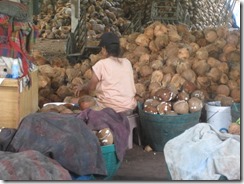 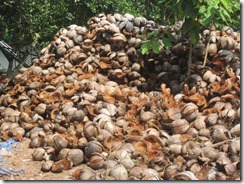 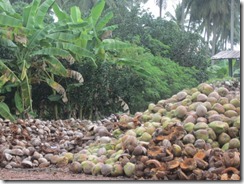 Then it was time for a snack to sample some of the fruit where we were given huge plates filled with perfectly-ripened bananas, mango, watermelon and pineapple and banana leaf-wrapped coconut custard. Although we have been thrilled to have these same fruits for breakfast at our Bangkok hotel, these farm-fresh samples tasted like entirely different species. Incredible.

Then back onto our bikes to a Mekong Riverfront restaurant where we feasted on coconut soup, fried snapper with chili, chicken with cashews, tiny whitebait-like deep fried fish with sweet and sour sauce and pomelo. We left fully fortified for our remaining 10 km afternoon ride over the Mekong, past more coconut plantations and irrigating klongs, to meet our van (which was following us the entire trip) for a 90 minute drive back to Bankgok and our hotel. A fun, informative and totally professional tour through not only Damnoen Saduak, but also a "real-life" floating market and the farms that supply them.