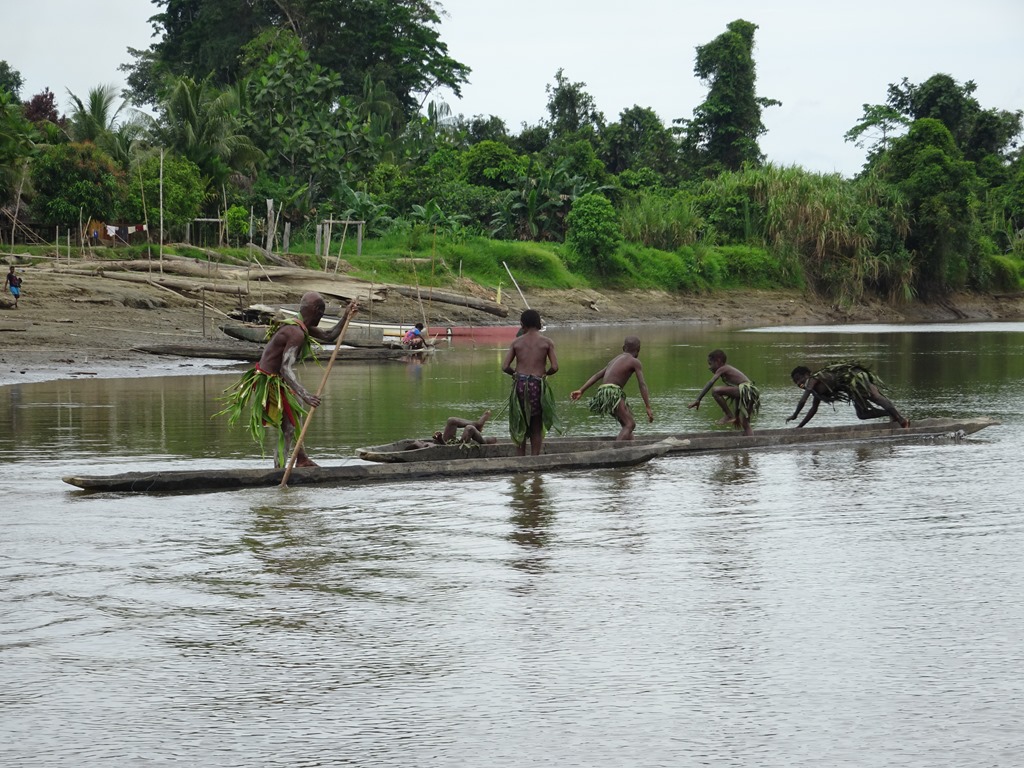 Cannibalism in the Sepik

Next up on our tour of the Septik River tribes in Papua New Guinea was a war games reenactment by the village warriors: the occupants of a war canoe threw spears and rammed a canoe from another clan. They captured the invading canoe, captured and killed the survivors and brought them to the village. And since this used to be a cannibal village, they staged a pre-feast celebration. Men and women dressed in dried palm front frocks, painted faces and some wearing feathered headdresses (typically plainer than those of the Huli, with egret and occasional pheasant and Victoria Crowned Pigeon, rather than Birds of Paradise feathers). 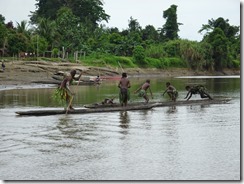 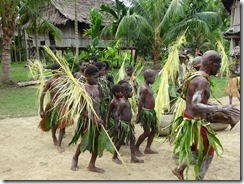 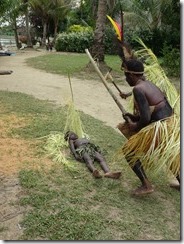 Although they skipped the cooking and eating parts of the celebration as this is no longer done, we did have the obligatory stop to view the village’s handcrafted souvenirs. These included brightly colored net baskets, palm leaf-woven bowls, penis sheaths and especially carved masks.

Black Water Lakes is a remote area of the river basin named for the color of the normal (although not in the season we visited) color of water of the lake and the nexus of where it flows into the river. This black color, compared with the normal brown of the muddy water, comes from the leaves that fall into the lake.

The journey took us up a narrow channel past a number of villages, including one consisting of 150 people. The channel was lined with pyramid-shaped, sago fiber-woven shrimp traps that are left in the water all night and retrieved the next morning, where they are left on the shore to allow the shrimp to dry. The dried shrimp are removed in the evening and the process is repeated, ad infinitum. 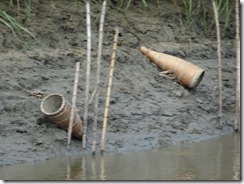 The lake itself is totally different from the river—a huge expanse of very shallow water with an average depth of perhaps a meter. It is laced with mudbars (versus sandbars) and large patches of apparently open water that are shallow enough to allow the ever-present, ever-graceful snowy egrets to easily stand in water that reaches barely above their feet. Although egrets are the most common site, flocks of red-billed heron and the occasional white-bellied eagle also fly by. 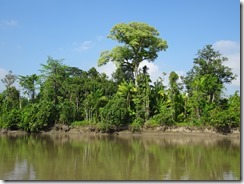 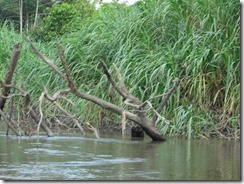 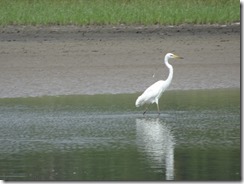 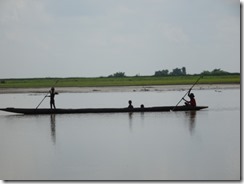 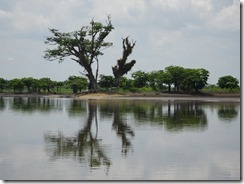 The banks are also very different than those of the river. Although there is some sugarcane, trees are sparse. Most of the land, which is only inches above water level, is totally flat. To the extent there is any vegetation at all, it is primarily grasses that will disappear with the rainy season, as the lake regains its normal level.

Although there are several Kabriman villages along the lake, we visited the largest, which is home to about 200 people. The homes are much larger than those of other villages we have visited, but they are sparsely stocked. No beds, no real furniture and a relative handful of pots, cooking and eating plates, bowls and utensils. A few clothes are stashed in the rafters and perhaps some fishing gear. 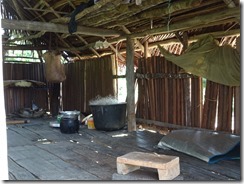 The village does, however, have a large solar panel for lights and cell phones and has its own schoolhouse with one teacher who teaches grades 3 through 8. While some parents don’t allow their children to attend, and many of those that do pay little attention to their child’s schooling, about half of all school age children do attend, albeit not all regularly.

The curriculum entails eight courses including English, mathematics, science, arts and crafts and personal development. Teaching is a challenge, since facilities are rudimentary and schoolbooks generally limited to one per class. Although it is possible for children to get higher education, they must pass an exam to qualify and then travel about an hour each way to reach the school.

We also had considerable time to peruse the tribe’s crafts display. While the men of the Sepik Valley are generally known for the quality of their wood carving, Kabriman men are particularly renowned, such as for their carvings of masks, hook figures, ancestral figures and drums. Many of our group took advantage of this opportunity to buy some beautiful pieces. Although we were certainly temped, we have run out of room at home and  have sworn off on buying any mementos of our trips, except for teeshirts! 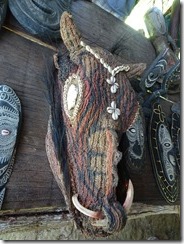 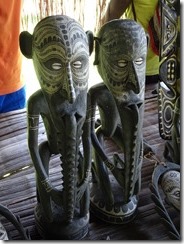 The tribe is particularly unusual for the way it prepares and initiates its children into adulthood. The boys’ program is particularly demanding. At age 15 or 16, most boys are deemed ready to begin their transition to manhood. They spend between six and twelve moths essentially locked into the village Spirit House. They undergo extensive training in the responsibilities of becoming a man and are allowed out of the building to exercise only in the middle of the night and are allowed to speak with nobody in the village—especially their mothers.

Then, when they are deemed ready, they ready for the final initiation ceremony. Each boy must undergo an extensive and painful process in which hundreds of cuts (initially by bamboo knives, now with metal) in which intricate patterns are cut into their chests, backs and arms. When this process is complete, there is an initiation celebration at which the newly anointed men perform a ritual dance (which we saw performed). It is only at and after this ceremony that their mothers are allowed to see their sons. 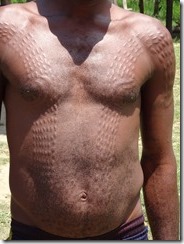 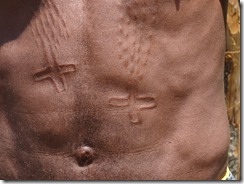 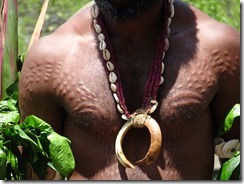 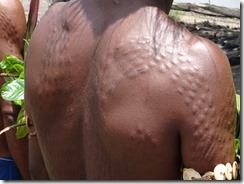 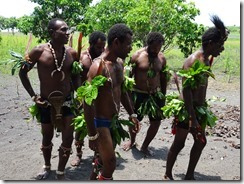 Unfortunately, this entire process was interrupted two years ago when a flood destroyed the village’s elaborate, quarter century-old Spirit House. While the elaborately carved posts still stand, the rest of the house remains as a mass of rubble. While plans are in place to reconstruct it, work has not yet begun. As a result, boys have either had to delay their training or initiation or undergo their program at the Spirit House of a nearby village.

Women have more and often less painful options for being initiated into womanhood. When girls reach age 14 or 15, parents have the option of sending their daughters to a village school for becoming a midwife. They undergo about a year of training where they learn about their bodies, giving birth, breast feeding and how to treat a husband. They assist in childbirths and when they are ready, are prepared to enter womanhood. They then engage in a celebratory dance (which we also saw) in front of the community. 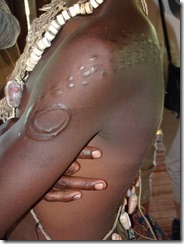 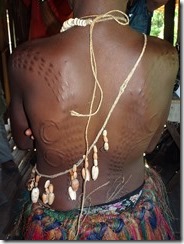 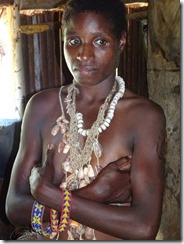 Women then have another choice—whether to go through the same cutting procedure as the boys. A surprising number choose to do so. We were given the opportunity, which we (along with everybody else in the group) reluctantly chose to take pictures of the men’s and the women’s scar patterns. While they were compensated for posing and sharing their culture, we sensed some reluctance to do so.

A Legacy of Headhunting

It was only at the end of our tour of the village that our guide even mentioned that this tribe used to be headhunters. While he was reluctant to even discuss it, he did take us the altar around which warriors danced before the hunt, where they celebrated a successful hunt and displayed the severed head. The alter, fronted by carved ancestral carvings, consisted of sacred rocks which while not available in the valley, were carried down to the current villages by the tribe’s distant ancestors. 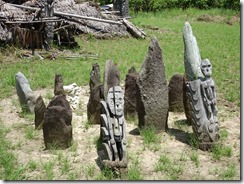 When pressed for details, our guide reluctantly explained that while the bodies were discarded (i.e., not eaten), the heads were boiled, the skin stripped off and the scull then dried, painted and displayed in the Spirit House. The appalled missionaries forced the villagers to give the heads proper burials and to swear off headhunting. Although our guide told us that the practice ended about 80 years ago, one of our fellow travelers told us that a villager with whom she had been speaking told her that the last incident was in 1992.