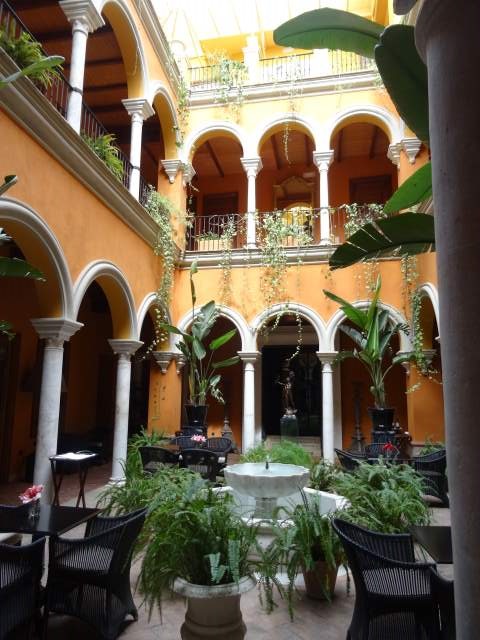 Seville is the heart of Andalucía. Founded by the Romans and ruled by Muslims for over 500 years, its architecture, art, food and culture is a blend of medieval, Arabic, Renaissance and modern European influences. And what a wonderful place it is…probably one of our favorites in Spain.

Santa Cruz and the Traditional Center of the City

We stayed in the Santa Cruz section of Seville, which was the old Jewish quarter. And where else would we want to stay? It is the oldest, most charming section of the city, whose streets are barely wide enough for a car and a pedestrian, whose alleys can barely accommodate two pedestrians walking side by side, and where directions mean little of nothing since both streets and alleys curve in seemingly random directions. The 15th through 17th-century apartments have been renovated, and mansions, like the one in which we stayed, have been turned into luxury inns. Most storefronts house either restaurants, tourist stores or interesting boutiques. Besides the charm, most of the city’s primary tourist sights are either in, or within easy walking distance of the quarter. And if you’re really hungry (and can’t wait till the 8:30 opening time for most restaurants) you can almost just reach up and pluck an orange from a nearby tree (although we have been told that the oranges are sour and only tourists do that). 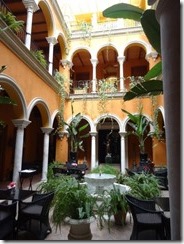 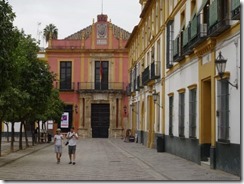 We began our exploration with a walking tour of the city’s monuments by Pancho Tours. The tour was quite disappointing. Although it did provide a useful introduction, the information was incomplete–or was it just that we did not understand our guide well enough to interpret what he was saying? Whatever the reason, we had to do a fair amount of additional research to pull the information together. Then, when we discovered that the same guide was giving another tour that we had really wanted to take, we decided to pass on the tour and explore the remainder of the city ourselves. How bad is that? The following is what we were able to pull together.

Any exploration of Seville must begin in Plaza Virgen de los Reyes, which is located right in the middle of a number of the city’s primary sights: The huge cathedral with its La Giraldo bell tower, the royal palace and the archives that contain all the Spanish documentation concerning the discovery and colonization of the Americas, from the letters of Christopher Columbus to the journals of Cortez and even Spanish government correspondence with George Washington. 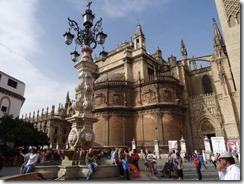 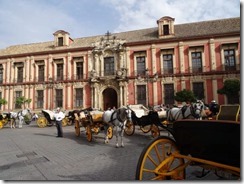 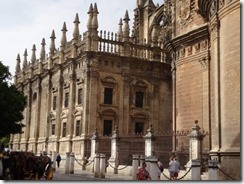 But to understand the city, one must have an idea of its history. It was initially founded as a Phoenician trading post, then colonized by the Romans from the 1st century B.C to the 5th-century A.D., captured and ruled by the Germanic Visigoths (5th through 8th century), and subsequently taken over and ruled for 500 years by the Arabs. It was they who established Plaza Virgen de los Reyes as the focal point of the city’s religious, political and economic life. The Muslims, for example, built their royal palaces on the spot at which the Real Alcazar now stands and a mosque and minaret at the location of the current Cathedral and its bell tower. In fact, when the Ferdinand III reconquered the city in 1248, he initially moved into the palace and converted the mosque and minaret to a cathedral and bell tower.

It was not until 1364 that the Pedro I began building his own Palace (within those of the existing Moorish Palace) and it took several more reigns for it to reach its current magnificence. We took the opportunity to see just how magnificent it is, since the building now does double duty. It is still a royal palace and the residence of the king and queen when they are in Seville. In fact, it is the oldest European palace still used as a palace. But when the royal family is not in town, the building and its beautiful gardens are open to the public as a museum. We took advantage of this opening to tour both of the public palace, and the royal apartments in which generations of royal families once lived and entertained.

Although some of the furnishings of the royal apartments (of which pictures are not permitted) are indeed luxurious, we couldn’t get too excited after or recent visit to Versailles and some of its private apartments). We did, however, get excited by the striking Muslim architecture, the incredible tiles, the exquisite wood carvings and the magnificent tapestries. And the gardens are quite lovely too. 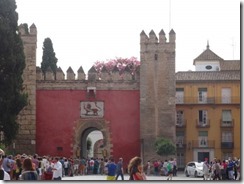 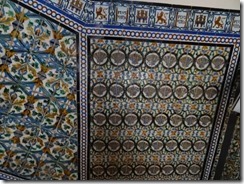 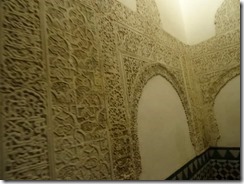 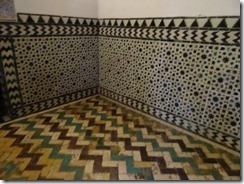 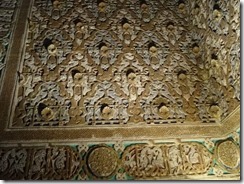 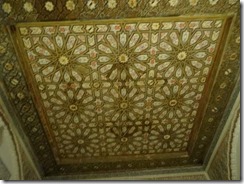 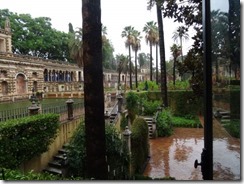 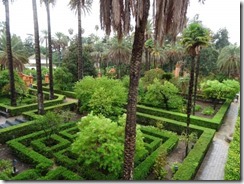 While the Hapsburgs began enhancing the palace to their own needs in the mid-14th century, work on an actual Christian cathedral was not authorized until 1401. It then took another 39 years for work to begin and it wasn’t completed until 1596. By that time, however, it had become the largest, if not the most magnificent, cathedral in Europe. Even then, two of the most beautiful parts of the cathedral complex—the patio and the bell tower—retain their Muslim designs. 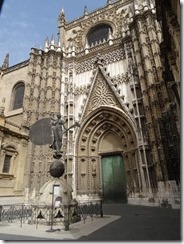 Consider the bell tower. After the Christian conquest, the only real change was to replace the bronze Muslim spheres atop the tower with Christian crosses and bells. Even when significant modifications began in the 16th century, these changes were largely confided to the very top of the tower. The lower two-thirds of the tower, as evident from looking at it, remains essentially unchanged since Muslim times.

The building that has since been converted into the Archives of the Indies has also undergone a change. When it was originally built in 1598, it was initially used as base for merchants to trade and conduct business. The plaza, in other words, became the absolute enter of virtually all city life.

Although the city’s primary sights are concentrated in, and we spent most of our time in Santa Cruz, there are a number of worthwhile sites outside this core area.

The area west of Santa Cruz is home to a couple of noteworthy and historic buildings. These include Plaza de Toros (the city bullring and bullfighting museum), Iglesia de Santa Ana (the city’s oldest church) and Torre del Oro (a Moorish tower that served as one of the city’s primary fortresses). 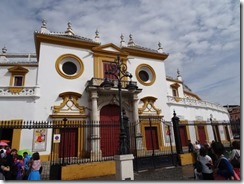 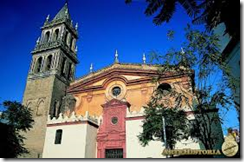 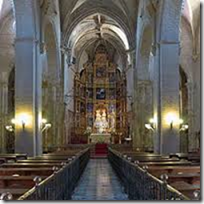 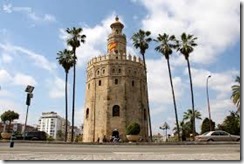 The northern part of the central city, just beyond the original city walls, was ripe for development. This section, characterized by wide avenues and boulevards, large public fountains, large open spaces and parks and, as a natural byproduct of modernity, less charm, quaintness and, by definition, history.

This being said, some very interesting and some beautiful sites remain. Consider, for example: 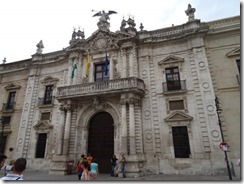 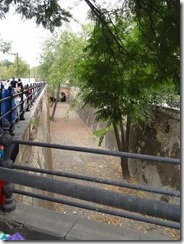 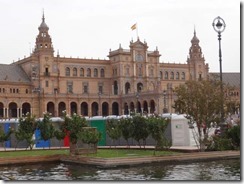 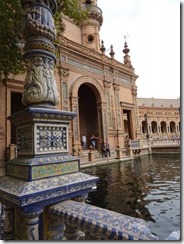 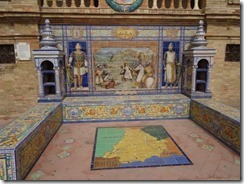 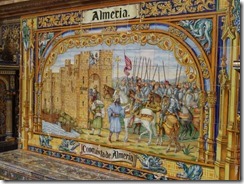 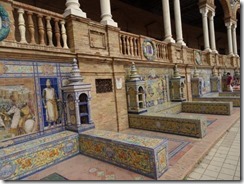 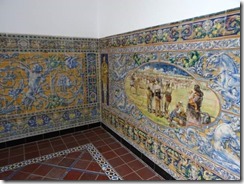 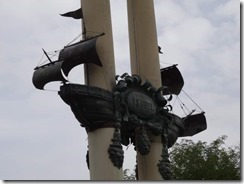 Additional sights are even further north. These include Alameda de Hercules, a tree-lined boulevard turned into a concrete promenade, each end of which is marked by two Roman columns, one dedicated to Hercules and the other to Julius Caesar. While these monuments date far back into past, the Metropol Parasol is an intent to evoke the future. This modern sculpture, referred to as The Mushrooms, is topped with an observation deck and skywalks and covers a plaza that is used to host markets and community functions. 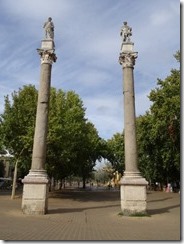 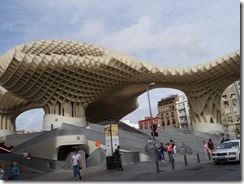 La Sal, a restaurant at which we enjoyed lunch and, given a paucity of fine dining restaurants around our hotel, we also went for dinner. We shared a foie mi-cuit with toast, olive oil, balsamic and tomato and prune marmalades as a starter, followed by two main dishes: grilled quail and grilled Bluefin tuna loin. We had these with a 2008 Remelluri Rioja Reserva. We enjoyed the food, the service was good and the atmosphere of dining alongside a scenic alley was wonderful.

Salvador Rojo, located in a pretty and modern space about a mile and a half south of Old Town, this restaurant serves upscale meals and, on an outside deck, interesting tapas. We had dinner beginning with an amuse bouche of tomato soup sprinkled with bits of ham and cheese. Our appetizer was a very unusual and tasty foie gras cake consisting of foie terrine interspersed with green apple, topped with caramelized sugar and served with candied prunes. Tom had an equally good roasted duck magret (cooked perfectly) with reduced Muscat and pepper sauce with a mélange of berries. Joyce’s grilled sea brean was done perfectly and plated beautifully. Unfortunately, the sautéed mushroom and shallot juice, while good on its own, overpowered the fish. Wine; a 2005 Rioja Reserva from Ardanza, had a bit too much acid and anise for our tastes. Although the food was generally quite good (except for the mismatched sauce), service, despite the small number of people in the restaurant at our early hour, was abysmal.

Restaurante San Marco, where Tom had a delicious baked sea brean and Joyce a less satisfying version of tuna tartar, along with a 2012 Castilla y Leone tempranillo/syrah blend from Mauro. Pretty good, but life’s too short to eat less than satisfying tuna tartare.

La Sal, where we shared two tuna appetizers; a very good Bluefin tuna loin tempura with miso sauce and dried bonita, and a less interesting Bluefin tuna cheek with rice, oil, garlic and parsley. This was followed by a very good calamari stuffed with chopped squid and potato and served with orange sauce.

La Bulla, a neighborhood tapas bar at which we shared two nice dishes: goat cheese gratin with balsamic and crispy corn, and foie gras with fruit sauce; and two less compelling ones: langoustine tempura and a fried seafood roll with vinaigrette dipping sauce. Joyce had a white wine and a Fino sherry.

We stayed at Casa del Poeta. It look a little bit to find it, but once we did, we were very happy..did I say very happy?  It is a beautiful small hotel in what we’d consider a traditional style with courtyard and open spaces so that the courtyard is visible on all floors. Staff is outstanding and goes out of their way to be helpful. You are met with a welcome drink in the courtyard while they check you in. Location is great in the old town and close to anything there. Would stay here again but would ask to be on the2nd floor. Our original room #15 on the first floor, where the air conditioning blew on you while you were in bed. The room was dark but comfortable. Our second room was #21, which had much more light, more room, had air that didn’t blow on you and was much nicer.