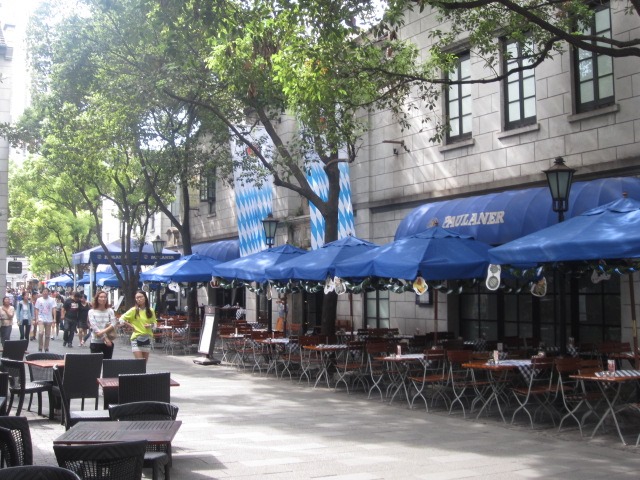 A Brief History of New Shanghai

That’s only a small exaggeration. The city was only a small county seat until the mid-19th century when the Treaty of Nanking opened Shanghai to foreign trade and led to the establishment of the British, then French, American and Japanese trade concessions and communities. With the westerners came the luxury and and the decadence that characterized the city until the Japanese began bombing, and then occupied the city from the late 1930s through the end of World War II. Then came the 1949 Communist takeover. The few remaining foreigners left. The previous symbols of Western decadence–including the mansions and commercial buildings–were divided into tiny apartments. But the exteriors of grand Art Deco and Neoclassical buildings along the Bund and the mansions (especially in the old French Concession) generally remained–ready for restoration as the city began to reopen.

Then, in 1990, China established the city’s traditionally poor Pudong section as a special Economic Zone. The population exploded, corporations and huge sums of investment money poured in. The equivalents of two or three new “Manhattans” sprung up–except they were much taller, much more modern and much glitzier. Then the entire city, along with its roads, airports, hotels and its subway system were all expanded and enhanced in preparation for the city’s showcase event, the 2010 World Expo.

It is the new Shanghai, along with views of the few remaining “quaint” (i.e., old and cramped) lilong alleyways and shikumen buildings (small, attached two- and three-story attached houses fronted by stone gates that were built around courtyards in the mid-1800s) that represent Shanghai’s history and draw millions of businessmen and tourists to the city.

The French Concession, the large segment of the central city in which the “historic” buildings (typically from about 1880-1920) remain. While many of the largest and prettiest ones have been renovated, many of the others still show their ages.

This section contains many of the city’s primary commercial sections, including: 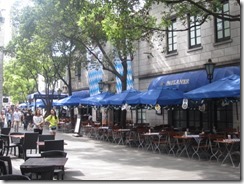 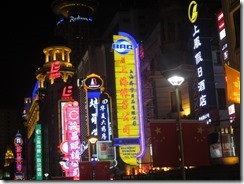 Most of the other parts of the city have, over the last 20 years, been torn down and replaced by the thousands of steel and glass towers that now dominate the city and by a growing number of parks. The city is, in fact, a showplace of modern architecture.

Although we are staying in and spending much of our time in this section, we visited some of relatively few remaining “lulongs” or alleys in which the old buildings remain. The lulongs, like Beijing’s hutongs, have electricity and running water, but no toilets (unless they have been extensively and expensively remodeled). They are also in desired locations and very expensive, often 3-4 million yuan for 100 square meter units. Unlike hutongs, however, most of the lulongs are two or three stories and may have their own dedicated courtyards.

Although most of these lulongs have been torn down and replaced by much more expensive high-rises (for which residents are either paid or offered larger, more expensive replacement housing at the same cost, albeit further from the city center), some have been taken over and renovated. Examples include:

We also took in one more authentic, and one totally reconstructed cultural sites during the day:

Jade Buddhist Temple is the most historic (80 years old) and one of the most revered religious site in the city, housing about 100 monks. It’s the site of temple built to house a one-ton sculpture of Buddha that the monk brought back from Burma 100 years ago. As an extra bonus, it has a large reclining Buddha carved from marble. The Temple also contains a number of interesting tourist shops, many with master artists demonstrating (and attempting to sell) beautiful calligraphy, complex scissor-cut pictures and hand paintings In which paint is applied with fingernails, fingers, palms and even forearms, but no brushes or other artificial aids. There is also a lovely selection of donated jade carvings that were donated to the monastery and are being sold to benefit the poor. Overall, a very worthwhile stop. 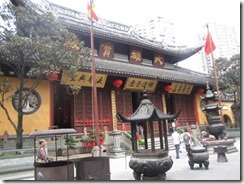 Yu Gardens and Bazaar the bazaar, which is filled with tourist shops, is built around a rather hokey, but still pretty re-creation of a classic Chinese town. The interesting roof angles are especially interesting. The real highlight, however, is another re-creation–this a 30-year old reconstruction of a Ming Dynasty official’s palace and garden. The place buildings, and the incredible garden are so beautiful that you forget and don’t care that it’s a re-creation. Two spots stand out in the garden, the rookery, which is constructed from beautifully eroded rocks placed around a pond, and the tea house. Although the bazaar is optional, no visit to Shanghai would be complete without a visit to the garden. 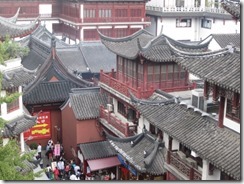 An evening sightseeing cruise of the Huangpu River. Is one of the classic Shanghai sightseeing experiences. The cruise itself was nice, with the beautifully lit buildings (lit especially for Golden Week) on both sides (especially Pudong) from the River. While it was nice, it was not much better than viewing them from the Bund Promenade and was no comparison–at least from our perspective–of seeing it from the relaxed, elevated confines of the House of Roosevelt roof deck. And this is not even considering the struggle to navigate the absolutely packed Bund, the detours mandated by human police barricades or all of the pushing and shoving in the line to get to and onto the boat during Golden Week. So, take the boat tour if you really want to experience the beautiful light show from the water, but if you don’t have a burning desire to take to the water, stick to the Promenade, or better yet, grab a seat at,a relaxed roof deck bar. And for God sakes, absolutely DO NOT take an evening boat during Golden Week. 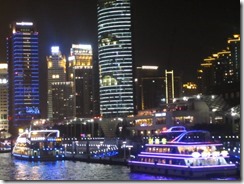 Pudong. We spend few hours in this newly constructed “temple” to skyscrapers. The trip began with a rather fun tram ride through what is billed as the psychedelic Bund Tunnel. It consists of a tram ride beneath the river through an array of light effects intended to suggest the creation of the universe and the earth. A little hokey, but fun. We did arrive in a new world, from the stately Neoclassical and Art Deco Bund into a new world of futuristic high-rises and planned, geometrically laid-out communities of 10- to 20-story residential towers in Pudong.

We stopped for lunch at a shopping mall. Not, however, just any shopping mall. The IFC mall is a marble-clad ultra-luxury mall that contains all the brand stores that a luxury Western shopper would expect. And although we are certainly not authorities on malls (we typically avoid them like the plague) or certainly on mall restrooms, IFC has restrooms that put those in a Four Seasons hotel to shame with marble, attendants, private sinks, etc. But we digress. We had a very nice, although quite expensive lunch at the mall’s Lei Garden restaurant–roasted duck in a tasty hoisin-plum sauce (although it did have significantly more fat than at our favorite, Beijing duck restaurant) and sautéed shrimp with mushrooms and green chives.

After lunch, we did the typical Pudong tourist thing–an elevator to the observatory of the modernistic, Chinese neoclassical inspired Jin Mao Tower. Although somewhat dwarfed by the neighboring Shanghai World Financial Center and the already huge, still-to-be competed Tower, the view was still very scenic.While the distant views of the reasonably clear Shanghai sky were blurred by ever-present (but much, much less than in Beijing) smog, the verticality of the city is amazing. 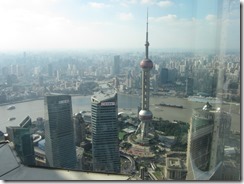 The Bund. The Bund was, by far, our most visited Shanghai destination. We ended seeing the riverfront stretch in virtually every way possible: We 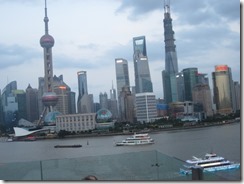 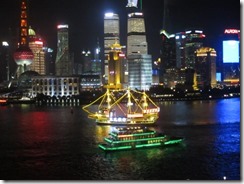 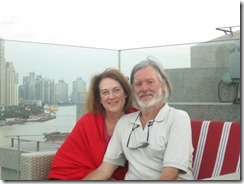 The interiors of some of the Bund buildings are even more beautiful than the exteriors. Among our favorites are:

This is another wonderful Chinese museum which we unfortunately, had to speed through due to time constraints. We began with the jade collection, which focused primarily on jades up through about the 17th century, rather than the newer, more complex pieces than are created by modern technology. But after watching a short video that described the incredible difficulty of carving very hard jade with primitive tools, we gained a greater appreciation for even these earlier pieces. Our other primary focus was on Chinese porcelains, which we love almost as much as its jades. We spent lesser time in the painting, calligraphy, bronze and native clothing galleries.

We were also fascinated to learn that the museum also had a special exhibit on loan from our favorite small U.S. Museum–the Clark in Williamstown MA. Although the line for the art exhibit, on Impressionism and the Barbizon School, was too long for our limited time, judging from the pictures, we have already seen many of these paintings at the Clark. We did, however, find an accompanying exhibits on Robert Clark very interesting. We knew of Clark and his wife’s deep knowledge of and passions for Impressionist art, but we had not known that he had also led one of the earliest, most comprehensive scientific expeditions of northern China in the early 1900s. Not only did his expedition contribute much to the geological, biological and historical knowledge of China, but he also made big contributions to medical care, offering free care to local tribes. Moreover, while his expedition unearthed many historical artifacts, he turned them all over to the Chinese government, never removing any from the country. 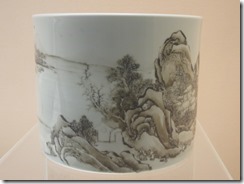