We recently spent a few days exploring Sierra Foothills of El Dorado and Amador Counties in California. The trip took us through some of the area’s prettiest and most historic gold Rush boom towns.

We explored three gold-based boom towns in the Sierra Foothills. Two of the boom towns continue to thrive (largely as tourist towns).The third had been abandoned and has since been reconstructed as a historic park.

Nevada City was one of Gold Country’s primary capitals and trading centers. Today, the 3,000-person tourist town has a number of nicely restored relics of the boom years. These include the two renovated firehouses (one of which is now a museum with artifacts from the native-American settlements, pioneer cabins, mines and even of the Donner party), the Nevada Theater and the National Hotel (the oldest continuously operating hotel west of the Rockies). 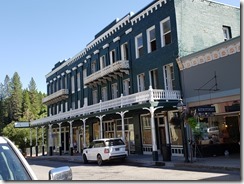 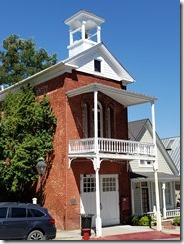 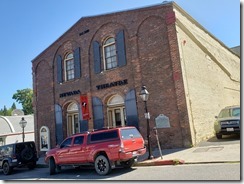 The rugged gold country is also filled with hiking trails that trace the steps of the miners through the rugged landscapes and past remnants of old panning sites, mines and regrown cliff-faces that were warn down by hydraulic mining. We explored part of one of these trails, the Deer Creek Tribute Trail. The trail includes a pedestrian suspension bridge (a 150-foot Niesenan Tribute Bridge) that spans a deep gulch. 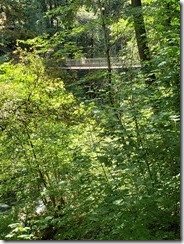 We ate lunch at the South Pine Café. Here we enjoyed an Avocado BLT and a small, but tasty bison burger with cheddar, bacon and caramelized onions with habanero sauce.

Today, Placerville is a 10,000+ people town with nicely renovated street with a few reminders of the past.  The town had so many criminals in the old days that they often had to resort to double hangings—hanging two men at once to manage the backlog of condemned men. Much of its history is told in explanatory panels and plaques, history museums and regional historic parks. 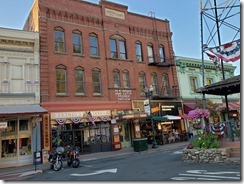 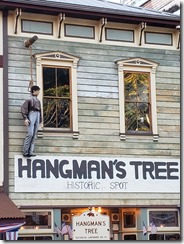 We didn’t spend much time in the town other than a stop at a top local restaurant, The Independent.  We had a very pleasant dinner on their outside patio: spice-crusted seared Ahi with toasted sesame seeds and ginger-miso reduction, with coconut rice and sugar snap peas; and molasses-brined pork chop with apple-shallot chutney and a side of onion strings. Our wine was a local 2016 Barbera Reposada from Borjon Wines.

We stayed at Bella Vista Bed and Breakfast. This lovely B&B was outside of town on a hill top. We had a hollywood-theme room with a very comfortable king bed and a “secret” room. If you find the room, you are rewarded with a bottle of wine. Our only criticism of the place was that it was so filled with furniture and fun hollywood tie-ins to movies, that we were left with little space to put our things. But that should not stop you from staying here as the property, the staff and the ambiance are wonderful.

Since our main purpose for this trip was to view the Perseid Meteor Showers, we wanted to be at a place outside the lights of the city to give us the best possible view of the meteor shower. And as luck would have it, the view at Bella Vista just happened to be from an outside hot tub! While that allowed us to enjoy the experience, we never saw a sky studded with dozens of long light trails that we expected in spite of staying up past midnight. Instead, we ended up with a total of five bright, but short, low-persistence streaks, each of which lasted for only about a second. So much for the meteor showers!

Still, we enjoyed our stay in the area. As Placerville was close to three neighboring wine appellations: (El Dorado, Amador and Fair Play), we had to make a few wine stops:

How many people know the story the January 24, 1848 discovery of gold at Sutter’s Mill? The discovery spawned the California Gold Rush and led to the explosive growth of San Francisco, from a population of fewer than 1,000 to more than 25,000 over two, short years? Coloma was where it all happened!

Coloma was the rough-and-tumble mining town that rapidly developed around this stretch of the American River. It was originally a forested, riverfront home to two Native American peoples: the Nisenan and Miwok. Then John Sutter partnered with James Marshall to built a saw mill to supply an agricultural empire that Sutter intended to create on land granted by Mexico. When Marshall discovered trace amounts of gold close to the mill in the American River, life for the native people changed. In spite of the partners trying to keep the discovery secret until they could profit from it, word leaked and gold fever attracted hundreds of thousands of men to overrun effectively take over Sutter’s land. Although Coloma is no longer a lived-in town, the The Marshall Gold Discovery State Historic Park does an excellent job of telling the story of the town, the gold rush and the people who came to this rugged land.

While neither Sutter and Marshall ended up profiting from the gold discovery, the area rapidly emerged as a tent-and-shack settlement of about 800 prospective miners and merchants and professionals who supplied miners with goods, service and liquor. By the late 1850s, the easily retrievable placer gold began to wane and gold exploration moved to other areas. Gold mining also was shifting to the more capital-intensive hydraulic and drilling techniques that favored corporate, rather than individual miners. Indeed, while about three-quarters of individual miners managed to survive on the placer gold they found, only about five percent managed to strike it rich—about the same percentage who ended up destitute.

By the 1860s, the stripped landscape was being terraced and planted with crops, orchards and grapevines—resembling Sutter’s original vision for the rich land.

The park’s visitor center tells the history of the area and its people.  Exhibits surround reconstructed and refurbished homes, shops and stores. Fields contain ancient mining equipment and panels that explain their use. Visitors can see a replica of Sutter’s Mill has been reconstructed on its original foundations, a marker where Marshall made his fateful discovery and a nearby monument that marks his grave. 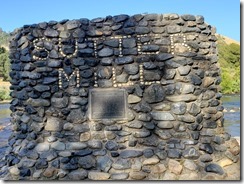 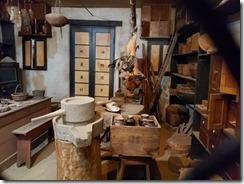 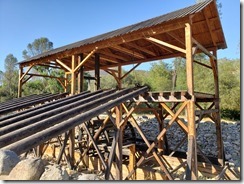 The park explains the evolution of transportation to the remote area: from five-to-eight-month ships voyages, to 25 day stagecoach rides from St. Louis, and ultimately to the relative luxury of a three and a half-day transcontinental train ride. It also tells the story of people who are often forgotten in the excitement story of the gold rush:

Plymouth California is really more of a crossroads than a town. It has a main street with perhaps six businesses, including a tiny store, a spa and Taste, one of the area’s top restaurants where we had dinner. After a full day of wine tasting, we shared a small meal. The appetizer corn soup with corn relish, cumin crème, cilantro and cotija cheese was delicious. Our seared Alaskan halibut with gnocchi, fennel, sun-dried tomatoes, brown beech mushrooms was OK but the anchovy caper butter and sun-dried tomatoes masked the delicate taste of the halibut. We enjoyed two glasses of wine with the meal (Fate viognier and Vino Noceto Sangiovese Riserva).