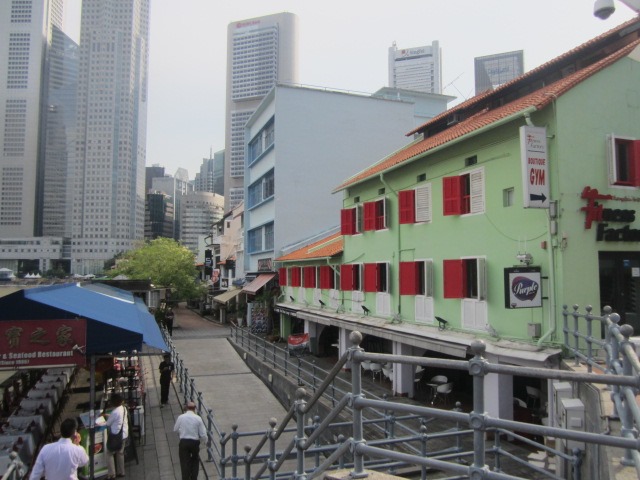 Although the food in Singapore was more expensive than in most of eastern Asia, we took it upon ourselves to seek out really good food that was still affordable. We could only imagine how expensive Singapore was for people who came from countries where food and hotels were quite inexpensive. Coming from the US, we found pricing to be on par with many of our own cities.  Some of the places we ate at were:

No Signboard Seafood. An upscale seafood restaurant, just north of the river along the Esplanade. Lunch consisted of three prawn dishes, We began with An appetizer of a lightly fried prawn roll with water chestnuts (okay, although not quite as tasty or crunchy as we were expecting). We followed this with two entrees: crispy fried prawns in an oyster sauce and stir-fried spicy powder prawns. Both were good, but we were surprised at how two very different sounding dishes could taste so similar.

Indochine. Although there are a number of different branches of this restaurant, we ate at one just north of the river in their outside café overlooking the river and joggers out for their evening exercise. We started out with two appetizers: a rice paper prawn roll with an Indochine sweet and spicy sauce, and a lightly fried minced prawn quenelle wrapped on sugarcane and served with a sweet chili sauce. We followed with one entree: a Toman (a light Asian white fish) fillet in a thick coconut curry, wrapped in a banana leaf. All were delicious and recommended. And, the Australian white wine went perfectly with the meal.

Not having enough of the food or the atmosphere, we returned for a second dinner the next night—which is very unusual for us. We were generally as pleased as we were with the first we ate there and split two appetizers and one entree. Our appetizers were Vietnam rice paper crab rolls (with green mango, apples, grapes, XO sauce and coriander) and lightly fried whitebait (a dish we haven’t had since New Zealand). Our entree was Khmer Style Tamarind trio (sea bass, scallops and prawns with a delicious tamarind caramel sauce with toasted cashews and sesame seeds). We enjoyed it with an Australian unoaked chardonnay.

Wild Rocket. While we enjoyed Indochine. Wild Rocket was probably our favorite restaurant in Singapore. It was also in a surprising location. We thought the taxi driver made a mistake when we got to the address as the restaurant is at the end of a residential area and is in the same building as a hostel. But once we confirmed that this was the restaurant we had read good reviews on, and we looked at the menu, we entered in and had a very enjoyable lunch. We chose  both a two-course and one three-course lunch, both of which were very reasonably priced for Singapore. Our appetizers were an adobo duck with truffle mashed potatoes, poached quail egg and baby spinach and Burmese tomato and blue swimmer crab salad. Entrees consisted of salmon donburi (rice bowl) with bonito, baby octopus and red rice, and roasted Chilean sea bass with chai poh confit and congee. We topped it off with a dessert of pandian- infused panna cotta with and amazingly sweet, but nuanced salted, caramelized palm sugar sauce. Although everything was delicious, the duck donburi and the panna cotta were truly memorable. The mixture of the dish’s flavors were specular. It is even more amaing when we found out that the chef is self-taught. The servers were very knowledgeable service and lunch was further enhanced by the two glasses of wine— New Zealand Morson Estate Pinot noir and an Australian Beresford Bemon Hill unwooded Chardonnay. Although wild Rocket is certainly out of the way, it is well worth a detour.

Haven Lobster and Seafood. Right on Boat Quay, Haven offers a big selection of seafood. We began with tasty spring roll. Joyce followed with a pretty good stir-fry fish fillet with peppers, onions, mushrooms and carrots in bean sauce. To,m however, had his heart set on frog legs. The same basic preparation as Joyce’s fish other than with a different sauce–a semi-sweet, spicy Thai sauce. All were pretty good. Many of the restaurants on the boat quay offer a large variety of fresh seafood from all over the world. Buyer Beware however, as ordering Alaskan Crab can cost you over $200 USD. We stayed with the local seafood for a more reasonable pricing. And, oh yes, did we mention that happy hour runs all day. Decent wines by the glass for a very reasonable price. And, if you tell the restaurant that you are checking out other prices on the quay, they might just try to entice you with your first glass of wine or beer for free. 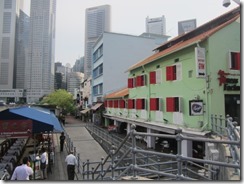 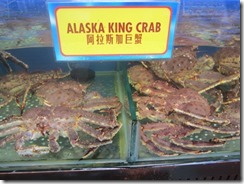 Maxwell Road Food Market. This is the largest food market in the city, with more than 100 stalls. The food here is very reasonably priced and is more like a food court where you go to the different stalls to get food and then sit down at any open table. We shared two dishes from two different stalls. The first, an oyster stir-fried prawn with noodles, was okay, but had a fishy taste. We were particularly intrigued by a stall that had one of the longest lines in the market, with many people ordering multiple dishes as takeout for friends and colleagues. After waiting patiently in line for 20 minutes, Joyce finally got to the head of the line (she had sent Tom out in search of a beer to quench her thirst while waiting). When she ordered the duck rice, they had just run out. The disappointment on her face must have sparked something because the guy serving the food managed to find a small piece of duck and fixed a plate for us because he didn’t want to disappoint us. Whew. When we got the meal—consisting of steamed rice with nice size pieces of duck and pork–we understood the crowds. It was delicious. While Joyce finished her beer, Tom washed down the meal with a fruit “milkshakes” from another stall. While he couldn’t really find a trace of milk or ice cream in it–only fruit blended with ice—he enjoyed the raspberry so much that he had to try another one–this time a papaya—which he also enjoyed. Watch for where the lines are and queue up there. 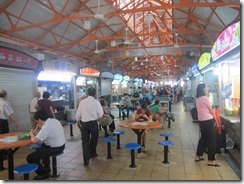 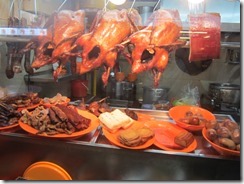 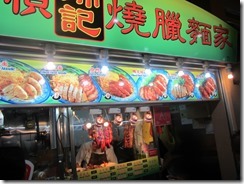 Georgian Raffles Hotel. While we didn’t eat here, we did stop at this ultra-formal institution that has hosted generations of royalty and celebrities and invented the classic Singapore Sling cocktail. If you want to try one there, it will cost $26 per drink. But, you also get shelled peanuts for free. And if you think you will save some money by soaking up the atmosphere with a beer instead, think again. Beers ran about $18 USD each. They have honed the fine art of leveraging fame into cash. 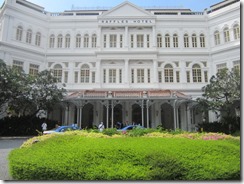 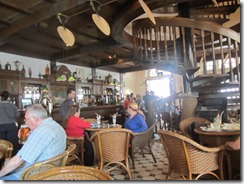 In Singapore, we stayed at the Pan Pacific Hotel located in Marina Square. This was a very new looking hotel that was very modern, sleek and clean. This was also the first hotel we ran into that put out juice, apples and soda for its guests. While the juice and apples are out all day, the soda seemed to be only out early afternoon. Still, it was a welcomed treat to find. And the apples made their way into our morning snack each day.

Like many of the nicer hotels in Singapore, this hotel was connected to an upscale shopping mall similar to what one would find in many US cities. We had booked a panaramic room, which had a large window overlooking the waterfront and the Singapore ferris wheel. The room was quite large and comfortable with an excellent bed, linens and pillows. My only complaint is that one had to open the left door of the closet to turn on the light. the right door, which gave you access to the safe and luggage rack, and was the one I usually opened, did not turn on the light. But it was only a small annoyance. The bathroom had a huge tub (bath salts were supplied) which Joyce took advantage of after a hot sweaty day of sightseeing. Also a large shower (you could use the overhead rain shower or a shorter one that sprayed from a lower spot. Bathrobes, slippers and the ever present tea pot were provided. They also provided a Nexpresso machine and coffee in the room. All in all, we felt the room was very fairly priced for what you got.