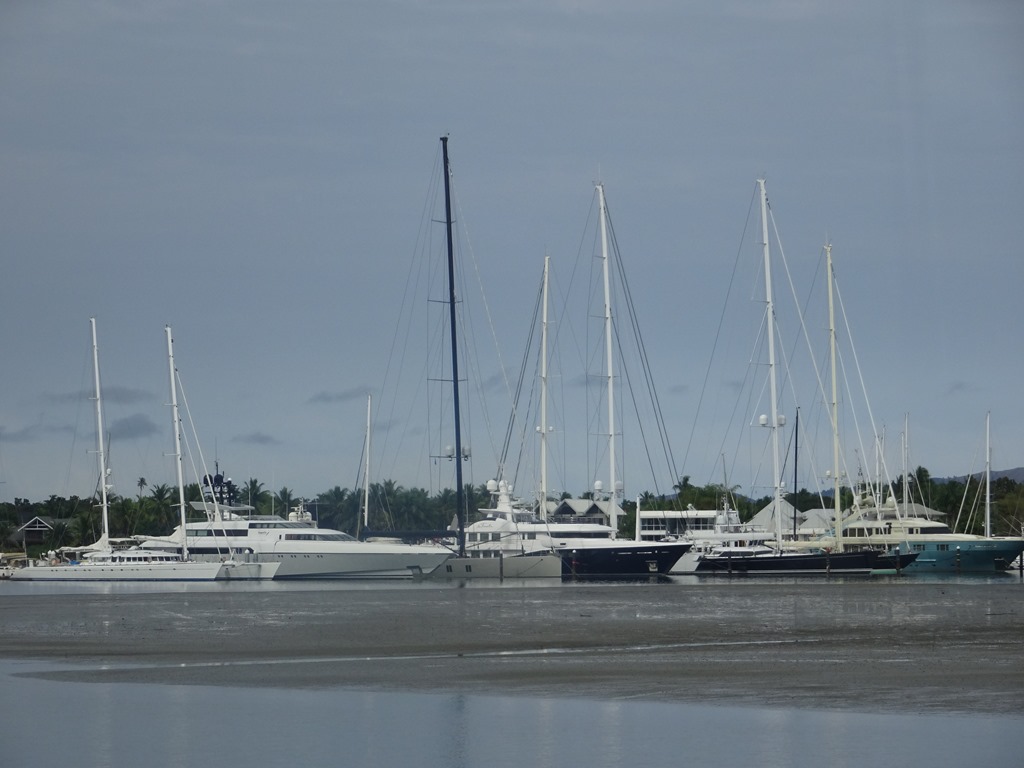 Denarau Fiji is the town next to Nadi. It is home to the island’s primary marina: Cruise ships, ferries, pleasure craft and yachts of all sizes seem to find the way there. We arrived early the morning our last full day in Fiji for a cruise and shark snorkel that we had pre-arranged (see below). While we rushed through the marina in the morning, we spent the evening there after our return from the cruise.

The yachts, docked all along the long pier made for quite an impressive site. The terminal is also the site of an upscale, tourist-oriented shopping complex and home to about a dozen restaurants. It also has nightly entertainment including Fijian singing, fire dancing and movies. 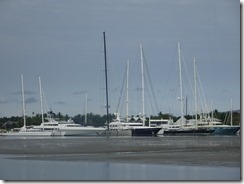 The complex’s dozen restaurants and cafes, according to what we had been told by a number of sources, are supposed to include many of the best around Nadi. We ate at Nadina, a Fijian restaurant (after a difficult choice among that, an Indian and a seafood restaurant) that served to verify the claim, at least to us. The entire Denarau complex, which we road through, but did not explore, also contains a golf course, a couple upscale hotels and residential community.

The Mamanuca chain of islands stretches north from the port at Dearau, then after passing through an open channel, leads to another, larger chain, the Yasawas. Anxious to see and experience at least part of this tourist mecca, we arranged a cruise through the Mamanuca chain to Kuata Island, the first in the Yasawa chain. Each consists of hundreds of islands, of all shapes and sizes; some inhabitable, others not.

We boarded a ferry, the Yasawa Flyer, for a day trip to see some of these islands and to experience one in more depth. Each of the six islands the Flyer stopped at on the way to our destination—and each of the 12 additional Yasawa islands that we did not reach, but that the Flyer traverses before returning to each island and to Denarau each evening is, in some respects, different. Some, for example, are tiny coral atolls while others are large, volcanic islands with peaks over 500 feet high. All, however, also have a couple similarities Each for example, has at least one, and often many sand beaches and each is home to at least one, and in some cases two or three resorts. Most of these resorts accommodate both overnight guests and daytrippers. 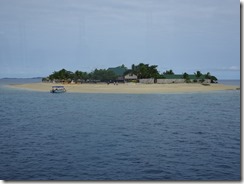 We were in the second category, cruising to Kuata, at which we arrived about 10:30, going on a shark snorkeling tour, having lunch, snorkeling off the beach, taking a guided walking tour of the island’s highlights, and still having time for a drink before boarding our 3:45 return ferry.

Snorkeling with Sharks, Squids and Coral

For the shark snorkeling tour, we boarded a launch for a 20 minute ride off the island where we experienced the typical chummed feeding of black- and white-tipped reef sharks. While interesting we saw more of the generally four- to 16-foot creatures on our Bora Bora shark dive. We did, however, see a couple of other things that particularly caught our attention. First were the dozens of what looked to us, exactly like baby reef sharks (roughly from 4- to 18-inch) that joined into the middle of the fray, with hundreds of primarily sergeant fish and a handful of the larger sharks, for the food. Only later did we learn that they were not baby sharks, but the remoras. While we have seen these swimming with or attached to sharks before, never that close, challenging the sharks for food in the middle of a chum scrum. 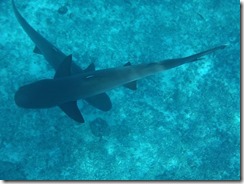 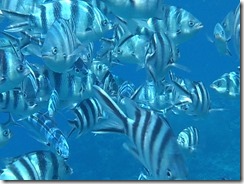 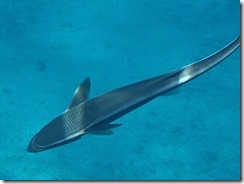 While we were disappointed to learn that they were “just” remoras, we took a time-out from the feeding to explore a more serene area a short ways away. We were rewarded by a chance to accompany a group of about ten small (about 4- to 6-inch) squid, swimming in formation, in a straight line, in parallel, rather than one behind the other. Each swam in perfect synchronization with the others, without any apparent visual cues. Since we had already seen the sharks, and since the “babies” were actually remoras, the turned out to be our most interesting siting.

After returning to the resort for a standard, but decent meal, we returned to the water, snorkeling about 100 feet from the shore to see some of the island’s coral and more serene reef fish. While most of the coral was broken, dead or bleached, we did see some pretty (orange, blue and especially bright blue tips atop a stand of otherwise bleached staghorn. Also some pretty butterfish, blur tangs, angelfish and parrotfish. Not enough, however, to keep us in the water for more than about half an hour. 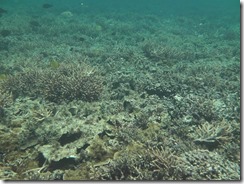 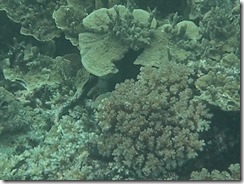 Although we had spent most of our time in the water, we also wanted to see a bit of the island’s land. The island has plenty of beaches and tropical forest, but it was originally a volcanic island. It is still dominated by a couple hundred foot, black monolith that, with its deeply pocked surface, appears from the water, like the head of a giant, imposing Darth Vader. As we learned, it is actually known as Phantom Rock. And, thinking back to an ancient comic strip from my long-passed youth, I did indeed see a similarity to the title “Phantom” character. 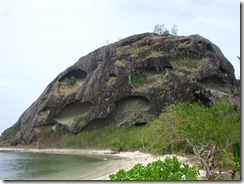 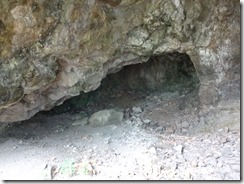 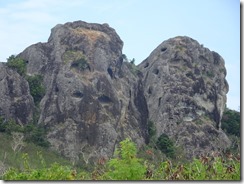 Up close, we saw just how pocked and eroded the massif actually is, with its eerily eroded overhangs, deep caverns and down to the shore, with its rugged black rock coastline. After exploring the rock, we walked through the forest, around to the back of the massive structure to a cave that has been eroded into the structure. Although the opening is relatively large, perhaps 150 feet long and 50 feet high, it is shallow, only 30 to 50 feet deep. As expected, it has the same roughly eroded, black volcanic surface as the head.

After exploring couple other eerily eroded volcanic surfaces, we retired to the comfort of the bar for a departing drink before catching the 3:45 return Flyer for the two-hour cruise back to Denarua and to what was to become, by far, our best Nada-area meal.