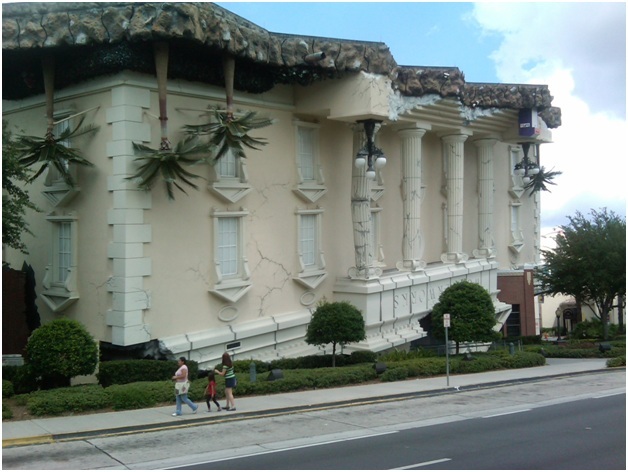 A 24-hour Cultural, Culinary and Bar Tour through Central Florida

It is ironic that our first post in our new blog is about a trip that is so brief and so unrepresentative of our travels.

Tom had to be in Orlando Florida for business. Since he had already done all of the theme parks and explored Orlando’s Church Street nightlife, he didn’t think he needed additional time in the city.

He was, however, very anxious to see St. Petersburg’s new Dali Museum. Although he had been to the original Dali museum, this one was supposed to be much improved. It is. The collection has been expanded and arranged much more effectively. Moreover, guided tours and free audio guides are invaluable in helping visitors gain some comprehension of the artist’s paradoxical work, his life and flamboyant personality, the importance of his muse, and the layers of hidden meaning in his work.

Not only is the museum wonderful, it is  also located on a beautiful site in what AOL Travel News calls “one of the top ten buildings you have to see before you die.” While this may be a bit over the top, the spiral staircase (representative of a recurring theme in Dali’s thought and work) and the glass-sheathed dome ARE indeed beautiful. The dome is also functional, with the custom glass dome capable of withstanding Category 3, and the interior “vault” protecting the art, Category 5, hurricanes.

Even if you are not enough of a Dali fan to justify paying the $21 entry fee, you can still enjoy the dome, the gardens, and the outside labyrinth for free. And then there is the gift shop, filled with Dali-themed memorabilia, and great views of the dome and staircase–all for free. And seeing the Dali-designed “Sea Car” in the gift shop is sufficient in and of itself to alone justify the several mile trek to the museum.

Although the museum, along with its dome and gardens, is a destination in and of itself, Tom packed as much into trips as he possibly can. This trip also included a few other stops, recreational and culinary, as well as cultural:

His plane arrived at 6:00 PM. After picking up a car, he drove to and deposited his car at his hotel (Hilton Garden Inn on East 9th Ave) and spent the evening in the historic Ybor City section of Tampa. After a walk to explore the neighborhood (and particularly the main 7th Avenue thoroughfare), reading the historical signs and performing his first level of triage to identify the bars to explore later, he:

After a relatively painless 22 mile drive to St. Petersburg (with little traffic on a Saturday morning), he spent time:

Unfortunately, time constraints did not allow him to do any of the three other things on his Tampa Bay area visit. He was not able, for example, to spend time in Tampa’s other major historical area, the Port of Tampa, or its Channelside entertainment complex. Nor could he visit St. Petersburg’s Museum of Fine Arts nor the Chihuly Collection’s sister organization, the Morean Arts Center and Glass Studio & Hot Shop.

While he may have been able to squeeze at least one of these in, he wanted to see one more art exhibit. This, however, entailed a 60-mile drive to Lakeland, which, as luck would have it, is almost directly on the way to Orlando. The reason for the stop was:

The day, however, was not over. he still had to get to Orlando, check into his hotel, return the rental car, and figure out what to possibly do for an evening’s entertainment and food in a big resort hotel (The Peabody). While the hotel does have a couple of restaurants that he would really like to try (Capriccio and Napa) and an attractive bar,

he was looking for more adventure. Unfortunately, Church Street, the center of Orlando nightlife where he usually goes, was too far away to justify a cab. Fortunately, another entertainment area, Pointe Orlando, was much closer. Although the complex contains many of the standard restaurants, stores, and theaters, the Wonderworks entertainment site is at least worth a look from the outside, whether or not you decide to spring for the $20+ entrance fee. 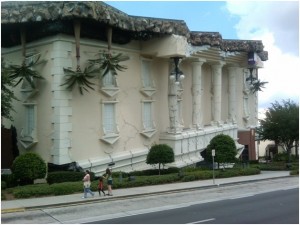 While he was content to view most of these stores and venues from the outside or for a quick, look in, he was drawn into extended stops at two:

But enough fun, culture, food, and drinking. The rest of the trip (other than five minutes watching the highly hyped, highly formalized, and highly popular march of the Peabody Ducks from their top floor “suite”, out of their reserved elevator, down their own red carpet, and into the lobby fountain), he had work to do.

After staring at an all too uninspiring buffet put out during the business part of his trip, he joined a colleague to beat a hasty retreat. We decided to go to Napa (in the Peabody Hotel). We shared the appetizer sampler (a beautiful, five-level tower, consisting of very generous portions of five dishes ranging from a scallop ceviche to beef croquet). 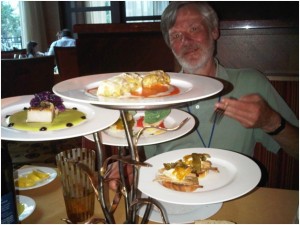 This was followed by perfectly done New York Steak and Filet Mignon and accompanied with one of the most delightful Cabernets he has had in a long time—a 2007 Burley from the underexposed Coombsville region of the Napa Valley. Great service, yet again, from both the server and the sommelier. Judging from three of the four restaurant experiences from this trip, there does indeed appear to be something to the old saw about southern hospitality.

Finally, this conference, like most self-respecting Orlando events, was bracketed by trips to theme parks. Although he missed the trip to SeaWorld, he did make it to Universal Studios Orlando. A number of new rides appeared since the last time he was here. While only part of the park was open for our night visit, Spiderman was a hoot and the walkthrough Hogwart’s Castle to Harry Potter’s Forbidden Journey was quite a spectacle. As for the four roller coasters he was on, they don’t make them like when he was young. He found The Dragon Challenge, in particular, to be, how shall we say … “challenging!”