Stanford University is more than one of the world’s leading teaching institution. It also offers the public free access to great works of art. On a recent trip to San Francisco’s South Bay, we had to see what was new

Our primary stop was a return visit to the Anderson Collection’s beautiful and functional Richard Olcott-designed facility to explore its extraordinary collection of modern and contemporary art. As luck would have it, we arrived just in time for a fascinating docent-led tour of some of the highlights of the exhibition. The building has a large collection of modern and contemporary American art. While many of the pieces are on continual exhibition, they do change the special exhibits throughout the year. We caught the tail-end of a docent tour, which helped us understand some of the more interesting pieces. We also wandered around by ourselves afterwards. We discussed many of the works in a previous post.

We then made a quick stop next door to the university’s primary Museum, the Cantor Arts Center. Although we were disappointed to find the museum’s modern and contemporary section temporarily closed, a volunteer suggested that we visit a temporary exhibition by contemporary Korean-born artist, Do Ho Suh.

The concise, three-piece exhibition, Do Ho Suh: The Spaces in Between, rewarded us with a fascinating perspective on international identity through three large, uniform, repetitive portrayals of the Korean people: 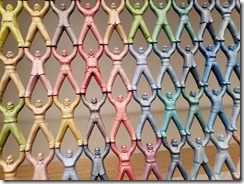 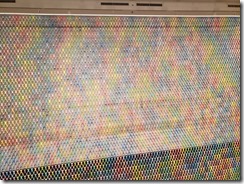 Although all the figures in each of the three installations is portrayed individually, each clearly represents a different type of connection among the different individuals. Overall, a fun and fascinating exhibit.