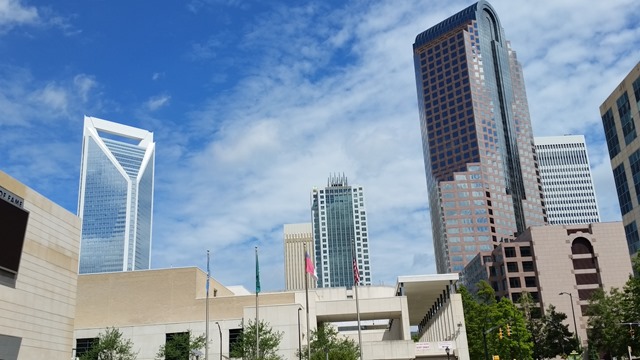 Our first, very brief visit to the state’s capitol city. It is, overwhelmingly, a city of new. New high rises and retail developments, new stadiums, new light rail system–mostly big, and mostly flashy. The biggest in the city–the corporate emblems of the city are Bank of America (which, being boomers, we still identify with San Francisco) and of course, NASCAR and its Hall of Fame.

But while the city’s growth mentality focuses primarily on the new, we found a few charming pockets of old. First and foremost, are the remaining handful of graceful, handsomely renovated homes in the Fourth Ward.

We, found two particularly lovely and gracious pockets of old charm and hospitality in this city of new within the day we spent in Charlotte.

The Colonial Revival estate of the founder of Duke Energy and primary benefactor of Duke University was initially built in 1915 and tripled in size in 1919. The common areas (used for many business functions) and gardens are lovely and generally well maintained. The rooms (at least our room) was large and well appointed, but not especially notable. Breakfast was a decent, but unexceptional buffet. Very nice, but not quite up to our expectations.

A memorable meal in a historic home that has been lovingly transformed into a wonderful restaurant. The gracious Fourth Ward Queen Anne Victorian, just outside of Charlotte’s expanding downtown, used to be the family home of turn of the century (20th century, that is) Charlotte mayor, Sam McNinch. It is now a gracious prix fixe restaurant (five or seven course, or the chef’s tasting menu) with a wonderful wine list. 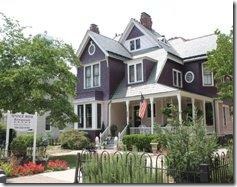 Arriving early, on what turned out to be a very quiet evening for the restaurant, we had a leisurely drink on the front porch swing. After being seated at a table at the front window, overlooking the front garden and the street, we selected ours dishes and a lovely 2012 Nickel and Nickel 1012 Suscol Vineyard Merlot to accompany them. Our meal consisted of six dishes:

And then there were the amuse bouche (Brie, orange marmalade and strawberry in a phyllo crust, the biscuits, the corn cakes, and the intermezzo of house-made sorbet. While the atmosphere and all of the dishes were wonderful, the service made the evening. Both the Maitre D/server, and especially sommelier Anthony Wesley (Wes), made us feel like welcomed guests of the family.

Wes, in particular, was instrumental tour experience. After demonstrating our interest in and appreciation for the comprehensive wine list, he took us under his wing, explaining his goals for the list, recommending dishes and the wines that he would suggest with each and then, throughout the meal, recommending or providing samples of other wines that he thought would best pair with each of our six dishes.

All in all, one of the most memorable dinner experiences we have had in a long time that will ensure warm memories of what for us, would have been a less than memorable city.

Then back to modernity for the last lunch of our visit. This restaurant, atop one of the city’s growing number of towers, is popular and busy business destination. It also offers expansive views of the city and countryside. We shared two dishes: the lobster BLT with housemate potato chips was generously sized and quite good. Grilled shrimp and scallops (two of each) were pretty good: more than can be said for the accompaniments of (overly artificially cheesy) creamy pimento mashed potatoes and the overcooked asparagus. Although the restaurant was busy, service was less than expected, generally slow with misstatements of the special from what was an apparently short staff.