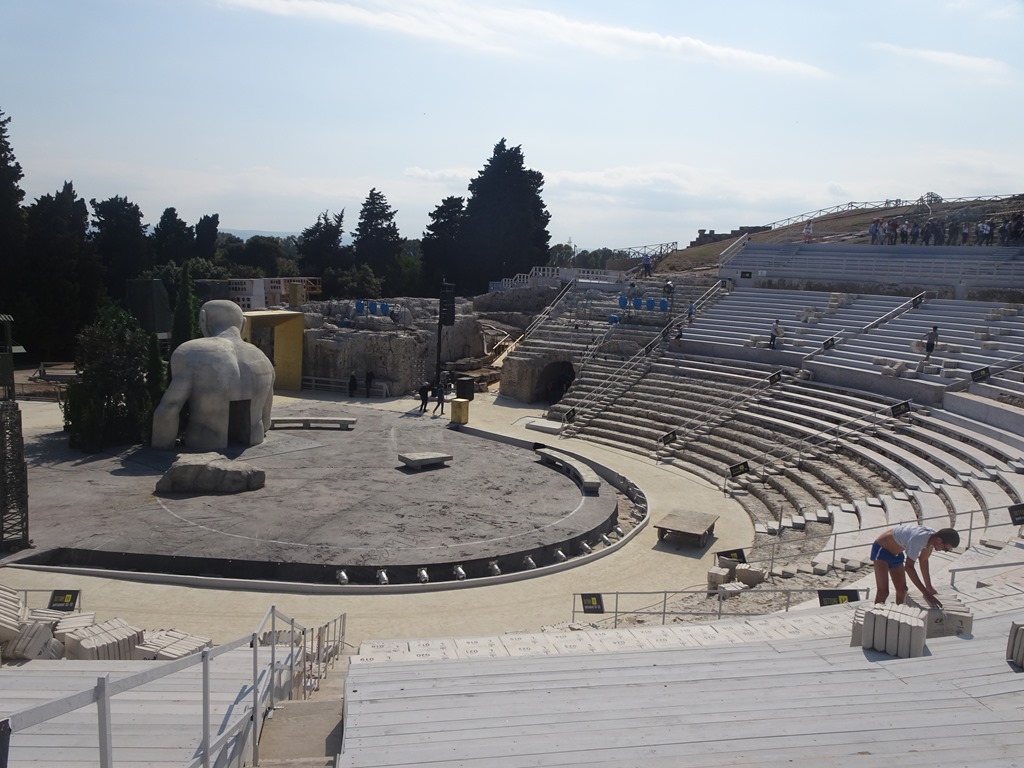 Syracuse, Syracusa, Siracusa are just a few of the spellings we have seen of this ancient, 2,800 year-old city that was one of the largest (home to 300,000 people) and most prosperous Greek cities five centuries before the birth of Christ. Home to famous dictators (such as Dionysius), philosophers (including Plato until Dionysius exiled him for examining political rights), poets (including Aeschylus) and mathematicians (Archimedes, of “Eureka” fame when he discovered the principle of water displacement and who temporarily slowed a Roman invasion by using lenses and mirrors to concentrate the sun’s rays to burn Roman ships).

But not only did the Romans capture the city (killing Archimedes in the process), but so did Barbarians, Byzantines, Arabs, Normans, Germans, and so forth. All these, however, were temporary setbacks, as was the 1693 earthquake and tsunami that destroyed large parts of the city.

The most famous remnants of the city’s ancient civilization: an Archeological Park with a Greek Quarry (which now encloses a grotto), tombs, a castle, a huge theater (which produced first-run plays from Aeschylus, Pinder and others), a large amphitheater (the site of gladiator fights and so forth) and the lovely cave known as the Ear of Dionysius, which was part of a prison that once held more than 7,000 Athenian prisoners. An Archeological Museum, meanwhile, portrays remnants from this and subsequent eras. 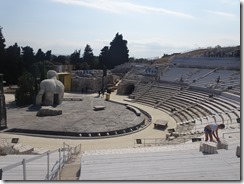 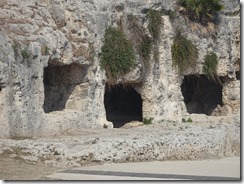 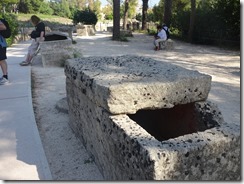 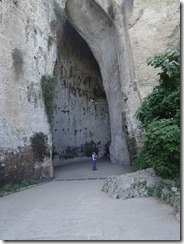 But, while the Archeological Park, the museum and the city’s modern cathedral are located in the mainland part of the city, the city was actually founded, and most of its leaders lived in Ortigia, a more defensible island just off the coast. This island too has its ancient Greek remnants. These include the Fonte Aretusa papyrus grove, the Hypogeum (ancient cisterns and tunnels) and the Temple of Apollo. And this doesn’t include the intact fifth century BC Temple of Athena that was transformed, intact, into a Christian church in the Byzantine era. 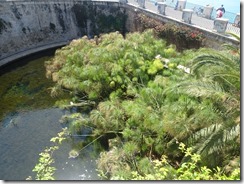 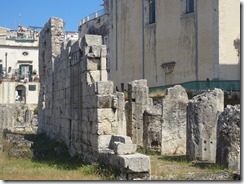 Most of the sites in the Ortigia island historic area, indeed date from the Byzanthian (sixth century AD) and especially the Baroque (late 16th century). Among the most interesting buildings and areas are: 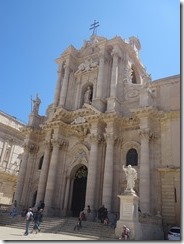 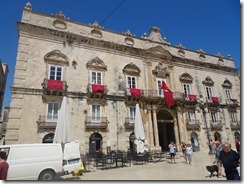 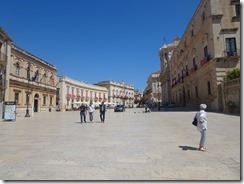 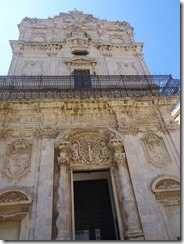 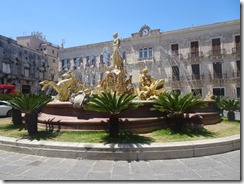 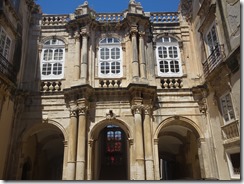 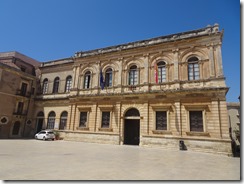 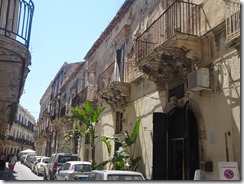 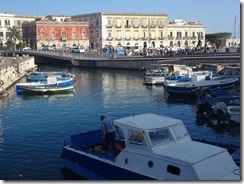 Overall, Syracusa turned out to be our favorite Sicilian city. NO, not because we were born in Syracuse New York and had the city name in common, but because of its beauty.

a Putia, where we had lunch of pistachio-crusted tuna with EVOO (extra virgin olive oil) and pan-fried swordfish with capers, olives, almonds, lemon, red pepper, parsley, white wine and EVOO, and a side dish of beet greens with garlic and, what else but EVOO. And since it we didn’t have to drive and a bottle was less than the price of three glasses, a bottle of 2017 Mazzei Arisa (a blend of Cattaratto and Grillo).

Sicilia in Tavola, where we had three simple, fresh, healthy, yet delicious dishes. We began with seabass crudo with salt, pepper and EVOO and a small fennel salad. Next came grilled calamari with steamed spinach and cherry tomatoes and a dish of steamed mussels, clams, squid, octopus and shrimp with salt, pepper, parsley and of course, EVOO. Wine was another Mout Etna white. This a 2016 Cavanova Ripa di Scoriavacca with 80% Carricante and 20% Catarrata.

Antico Hotel Roma. Nice hotel in the middle of old town. Our GPS took us and our car (with Joyce driving and bitching) through impossibly small one-way streets to get there. But once we found the hotel, we valet parked our car for 25 euro. Whew. Glad to not be driving. The room was very comfortable and the staff is very helpful…something that we have found in most of the places in which we stayed. The AC is interesting. They claim they control the temperature from reception and I asked them to lower it for us. Yep, the thermostat showed the lower temperature but we suspect it is a psychological thing as the temperature never really got cooler.