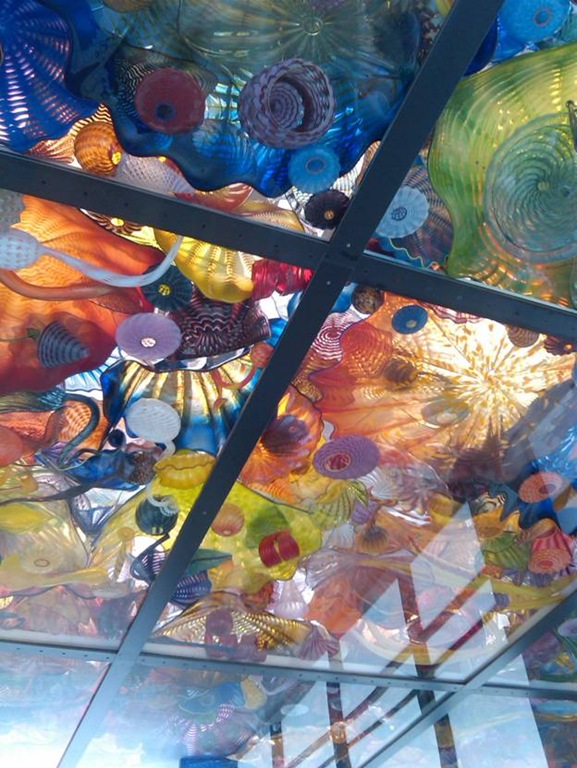 We love art glass—blown glass in every conceivable shape and color. A trip to St. Petersburg, Florida’s Chihuly Collection merely served to whet our appetite. We were, after all, about to head off to Seattle Washington—the virtual birthplace of American glass art and home of “the glass master” himself, Dale Chihuly.

We began our periodic pilgrimage at the logical place—Tacoma’s Museum of Glass. While the displays from the museum’s permanent collection were certainly beautiful, most of the display space was taken over by two special exhibits. Two artists had a long-distance collaboration (Sweden and Minnesota) between Ingalena Klenell and Beth Lipman. The result was a three-part exhibit titled Glimmering Gone. One perception-bending segment consisted of transparent forms of common objects (wine glasses, bottles and so forth) that were sliced in totally unexpected ways. another segment contained similarly sliced white glass objects that were embedded in a white wall.

The pièce de résistance and primary part of the exhibit, however, was simultaneously beautiful and haunting. It was a ceiling-hung landscape of hundreds of precisely cut and molded transparent and etched glass that, when viewed from different perspectives, could be seen as a series of symmetrical planes or an incredible winter landscape. 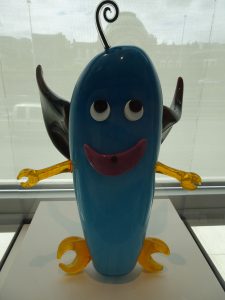 The other special exhibits consisted of Richard Craig Meitner’s thought-provoking, abstract glass art constructions and a series of wonderful, imaginative children’s designs.  The children drew colored concepts on paper (monsters, people, buildings, or anything else their imaginations can conjure up). He then worked with professional glass artists who cast these concepts in glass.

No visit to the Museum, however, would be complete without two other stops: 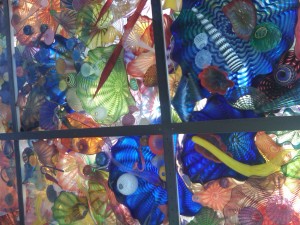 The bridge from the museum to the downtown area, conveniently, led us to Tacoma’s nicely renovated Union Station, with its three big Chihuly displays, and, next door, to the Tacoma Art Museum. Unfortunately, the museum was closed on the day we were there. We would have liked to see its large, permanent Chihuly collection and a special exhibition, Dale Chihuly’s Northwest.

After a pleasant lunch (grilled salmon and ahi tuna steak sandwich) at Pacific Grill (note: now closed), we made a couple of other fast glass stops on Tacoma’s glass art trail (The Swiss Pub and Tacoma Glass Blowing) and the also closed (at least in Tacoma) Travers and Vetri Galleries, we headed to Seattle to continue our explorations.

This included stops at Seattle’s Canliss, Vetri, and Traver glass galleries. Travers had a wonderful, large exhibit of Lino Tagliapietra glass and Vitri had a selection of less expensive glass (i.e., typically less than $10,000)  from a number of artists, including Chihuly. Seattle has been particularly blessed with a number of donations and discounted sales of public art from Chihuly. These include installations at Benroya Hall, City Center, the Washington Convention Center, and the particularly nice two-part installation at the Sheraton Seattle. 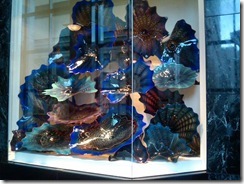 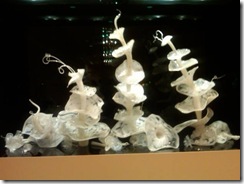 Although we were able to squeeze in a brief walk-through of the pretty, new Olympic Sculpture Park, we did not have time to revisit either the Seattle Art Museum or its Asian branch in Volunteer Park on this trip.

We, after all, were on a mission. Our primary objective of this trip was to see if we wanted to move to Seattle.  A combination of long walking tours, a wonderful friend-guided driving tour and a conversation with a helpful real estate agent helped us to tentatively narrow our search to lower Queen Anne and Capitol Hill. However, we decided that the weather in San Francisco was more to our liking and decided to save Seattle for visiting rather than living.