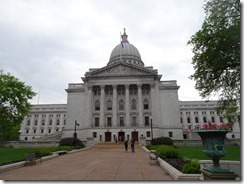 We had never been to the Madison Wisconsin and were anxious to explore the state capital/college town. We began in the state capital with its lovely, domed rotunda and exhibit touting the state’s role in pioneering women’s suffrage and its being the first state to ratify the 19th amendment. Unfortunately, we were visiting the city […]