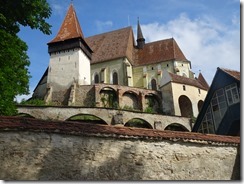 Bierton Fortified Church We have visited fortified towns and fortresses that have churches within their walled perimeters, and even fortified monasteries; but churches that are themselves fortified? This was our first. Fortified churches, of which there are approximately 150 in Transylvania alone, are effectively poor-man’s fortified towns. Unable to afford or justify the expense of […]