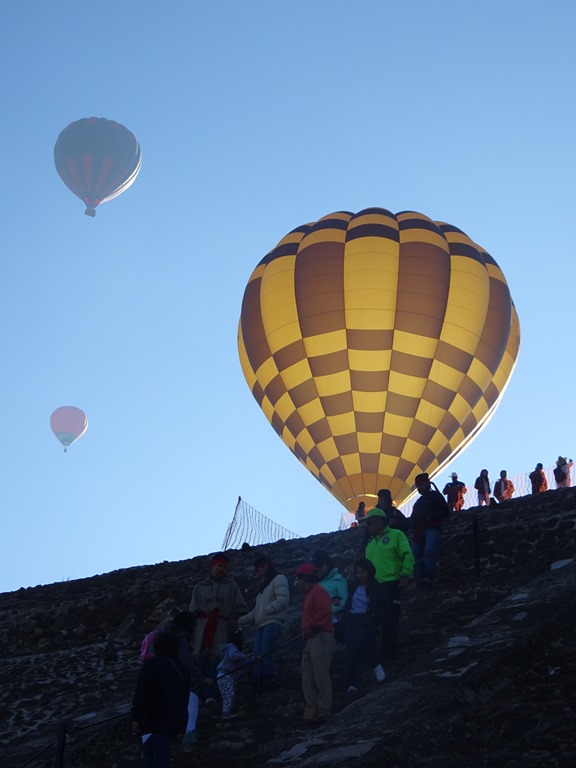 While In Mexico CIty, we ventured outside of the city to various sites. The next several blogs talk about what we saw.

Teotihuacan is the center of the Aztec civilization and the largest, most magnificent of all Latin-American Pre-Columbian cities. We visited Teotihuacan on our last visit to Mexico City, almost 40 years ago. With our memories foggy and with new discoveries and renovations being made every year, we figured we were due for a return visit.

Teotihuacan was the ancient capital of the Aztec Empire, a civilization that dominated the central Mexican highlands for about 600 years, from roughly 100-700 AD. Although it created monumental pyramids, rivaling many of those in Egypt, they laid undiscovered, beneath layers of earth and vegetation, for more than 1,000 years. Although excavations began in 1864, the Temple of Quetzalcoatl, the most magnificent of the site’s temples, was not discovered until the 1920s and new sites are being discovered every year. In fact, after more than 150 years of work, only about 10 percent of the 14.3 square-mile city has yet been uncovered, much less reconstructed. Even so, there is more than enough to see. And it is absolutely, positively worth the trip from Mexico City.

Teotihuacan was the largest, most dominant and most important of all the roughly dozen central highland population and ceremonial centers, rivaling the Incas, the Mayans and their successor Aztecs as one of the largest and most advanced of the Pre-Columbian civilizations.

Located at the crossroads of a large trading network that the chiefs established, it emerged as a major economic center, political capital and ceremonial site. It was the first and largest Mesoamerican city—complete with administrative, religious and population centers—to be developed in accordance with a defined architectural plan that included drainage (including the diverting of the San Juan River) and sewage systems.

Over its roughly 500 years of growth, it grew into the largest of Mesoamerica’s population centers, housing an estimated 175,000 people in more than 2,000 apartment compounds. The vast majority of these residents, however, lived in the outer fringes of the city, as in many of the smaller, surrounding archeological sites as well as in a number that haven’t yet been excavated.

The central city was primarily reserved for pyramids, religious temples, administrative offices and dwellings for priests and civilian leaders. Many of the pyramids and temples were not only massive, they were also lavishly decorated with carved, brilliantly painted sculptures and large murals. But as well planned, massive, and ornate as the city was, the Teotihuacan civilization, like most of the other powerful, ancient Latin American civilizations, eventually collapsed for reasons that remain unknown. Centuries later, the Aztecs discovered and held the site sacred, believing that it was designed by giant gods. They, therefore, treated it as a religious monument and made pilgrimages and offerings to it.

Whatever the causes, they certainly left a vast and impressive legacy. Unfortunately, nobody really knows exactly how, when or why the site was created, the people, their beliefs, their practices or how the civilization ultimately collapsed. (The best current educated guess is that it eventually fell, and its population dispersed, primarily due to internal conflict.) Since the civilization left no records, other than drawing and sculptures on temple walls, the only evidence are the sites and the artifacts that are being excavated.

The huge complex is laid out around a wide avenue, what the later Aztecs called the “Avenue of the Dead” based on their erroneous belief that the giant structures were royal tombs. It was instead, the main a main north-south ordinate axis that marked two of the five principal points of the Teotihuacan Cross, with the fifth marking the center of the earth. It is, indeed a grand avenue, with roughly a mile (at least that has yet been excavated) of steps, temples and in those days, immense, colorful murals. It ends at the impressive Pyramid of the Moon.

Although the architecture, scale and the view along the avenue is impressive enough, the true majesty of the city can only be determined by exploring each of the individual structures. We stayed right by the site so we were able to start our tour at 7 AM before the heat and crowds overtook the location. We were first greeted by hot air balloons over the pyramids. 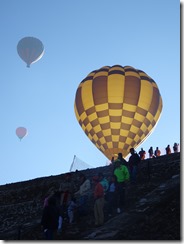 Among the most impressive structures in the central city are:

Pyramid of the Sun was probably the center of the complex. It is the largest of Teotihuacan’s many structures and is among the largest pyramids in the world. But, although its base is roughly the same size as Egypt’s Great Pyramid, it is shorter and therefore, has less volume. It, like a number of the city’s other large structures, is also built in tiers.

Although the structure, which was built about 200 AD, it currently appears as an unadorned adobe structure. It had been covered with brightly colored stucco and topped with at least two smaller temples. Being the tallest pyramid in the park, it is magnet for climbing. This despite the hundreds of steep steps, only some of which have handrails. Whether due to the Solstice or normal crowds, we don’t know, but we had to climb in a long line of people that stretched almost from the bottom to the top. And this was at 7:30 AM, well before the real crowds arriving about 11:00, just as we were leaving and just as the blazing sun and the temperature were getting hot. 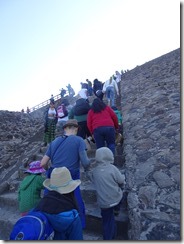 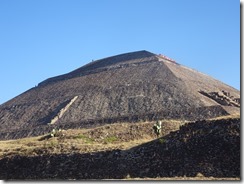 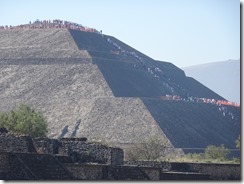 Pyramid of the Moon, which is considerably smaller than the Pyramid of the Sun, it is built on higher ground. It, therefore, reaches the same total height as its brother and, since it is located at the northern end of the Avenue of the Dead, it offers an even better view (which we, of course, had to see). It too was decorated with different color pigments. 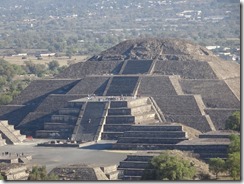 This pyramid is fronted by a large plaza that is surrounded by structures (each of which were decorated by murals) that are oriented to the center, presumably as a means of controlling the flow of people. The center of the plaza contains two small, but important structures: 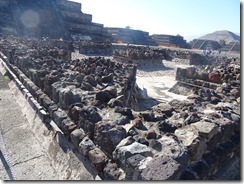 Quetzalpapalotl Palace, which was built atop previously built structures, is named for a mythical bird/butterfly creature. It is fronted by a grand columned portico that, although temporarily closed, is supposed to house some of the most impressive sculptures (including a huge stone serpent’s head), bas reliefs and murals (including several of plumed jaguars playing musical instruments) of the entire complex. The Palace also contains several courtyards, many of which are surrounded by priests’ quarters and related chambers, some of which still contain remnants of murals and frescos on their walls. 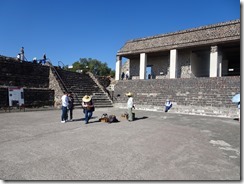 Temple of Quetzalcoatl, a magnificent, and the most sacred of all Teotihuacan temples that was dedicated to the creator of the universe and man. Originally built between 150 and 200 AD, it had since been covered by a subsequent pyramid which has been deconstructed to reveal Quetzalcoatl in all its majesty. Divided into seven stepped levels, the temple is covered with many carved serpent and monster heads that line the front of the large steps and the balustrades that lines the stairs leading to the altar. As if this site weren’t sufficiently awesome in its bare stone, Mexico City’s Museum of Archeology displays a wall-sized replica of the temple that is painted as it was thought to be in its prime. This temple also contains royal tombs that were looted about 1,600 years ago. 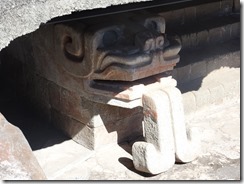 While these are the four most important and visited monuments in the main Teotihuacan site, they are far from the only ones. Among the more notable of these other sites are: 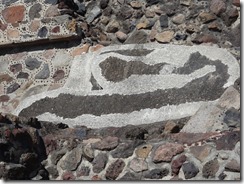 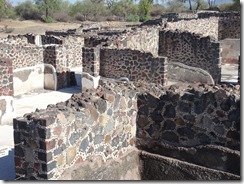 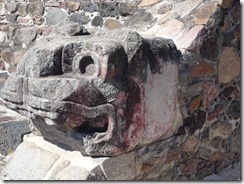 Then there are the walls and walkways themselves, many of which consist of granite with the concrete that holds them together being studded with decorate black pebbles. 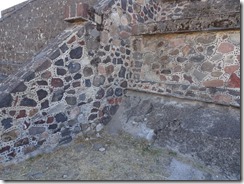 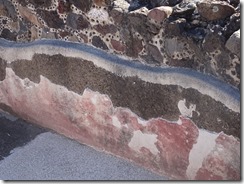 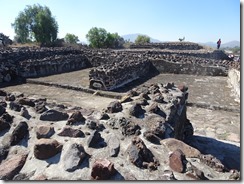 But for all we saw, there was much we did not have a chance to visit. There are, for example, fragmentary remnants of hundreds of other carvings and dozens of other murals that embellished walls around the main site and the dozens of smaller palaces, structures and residential buildings that are located miles from this central site. Examples include the Palace of Tepanti, Tetila, Atetelco, Sacuala, Zacuala and Yayahuala.

Our greatest regret, however, was that the only day we could visit was the one day a week (Monday) on which Museo Teotihuacan was closed. This museum contains a miniature recreation of the entire original site, many artifacts that were retrieved from the site and a number of reconstructed murals. Luckily, however, we had previously visited two Mexico City museums: one that contains some of Teotihuacan’s most spectacular artifacts (the Museum of Anthropology, as discussed in our Chapultapec Park post) and another (Templo Mayor, as in tour Mexico City Historic Center post) that contains a huge collection of artifacts from the later (14th– to 16th-century) heyday of the Aztec civilization.

The timing out our visit did, however, provide one unexpected surprise. As it turned out, we unintentionally scheduled our visit on the Spring Solstice, a particularly important holy time for the Teotihuacans and the date of an annual, very loud celebration that was held the night before, on a campground about a half mile from (but very audible at) our hotel. The next day, we saw long processions of white-garbed, drum-beating celebrants in the archeological park.

Media Luna. After arriving on a flight from Havana, we ate at the only place that was open…the restaurant at our hotel. It was surprisingly very good. We had two dishes. Shrimp tacos offered a larger than expected number of decent sized shrimp that were unfortunately fried. They were served with guacamole and an apple, onion, cucumber and cilantro pico de gallo-like mixture and picante sauce. The star of the meal, however, was grilled chicken breast with pumpkin puree and corn—delicious. We had these dishes with a quite acceptable bottle of 2011 L.A. Cetto Reserva Privado Nebbiola from Mexico.

We stayed at the closest hotel to the site, the Villas Arqueologicas Teotihuacan Periferico. Although basic, it was very clean and in a great location…within a q0 minute walk to the pyramids. The room had a twin bed and one that was slightly larger. The staff spoke very little English but we were able to communicate.  By all means, stay at the hotel and avoid the crowds and the heat—both of which arrive around 10-11. The only issue with the hotel (and this was not the hotel’s fault), a campground was close by ans they were playing music all night long. Still, we managed to sleep well