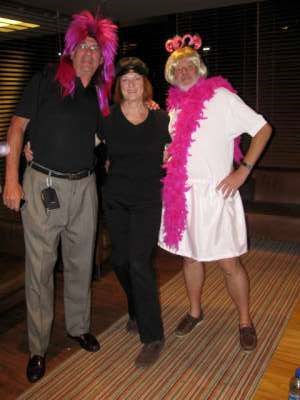 Rio de Janeiro’s Carnival consists of hundreds of different events, scattered all across the city. There are block parties, neighborhood parades, huge blow-out main Sambadroma parades and a number of celebratory balls.

The Gay Costume Ball is a ticketed, high-profile event is always one of the highlights of every Carnival and a fitting culmination (the last major event, starting at 11:00 Tuesday night) to the party season. After a full week of partying, hundreds of people go all out, donning some of the most elaborate costumes you can imagine to make their grand entrance down the staircase into the Scala Ballroom. Then, after a brief period in which they may pose for pictures, wait to be adored by fans or be kissed by some of the ball’s most eminent Grand Dames, they head into the rarified confines of the VIP room.

Although we paid $125 for a basic standing room ticket, devotees were more likely to pony up several hundred, or even $1,000 apiece for access to a table in the coveted VIP room.

Although a number of “amateurs” do attend the ball in street clothes, we brought wigs and other accoutrements to help us at least get into the spirit. Our campy attire prompted looks, giggles, comments, and in a few cases, even started conversations) in the hotel, on the streets and in the subway. They even got some attention at the Cinelandia and Lapa parties at which we stopped on the way to the ball. 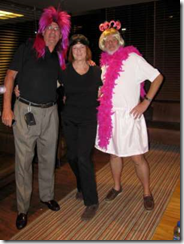 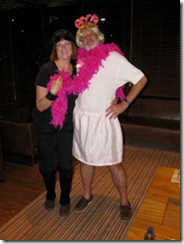 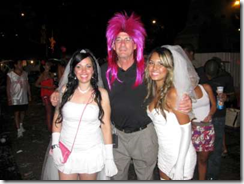 Our costumes, however, didn’t raise as much as an eyebrow at the cavernous Scala nightclub (the venue for the ball). The ball, as we discovered, was dominated by “the pros.” Drag queens in full makeup and elaborate costumes–some accompanied by their own entourages–made formal entrances in choreographed struts down the stairs. They were immediately surrounded by friends and admirers, occasionally posed for a few pictures, and then made beelines into the VIP room. 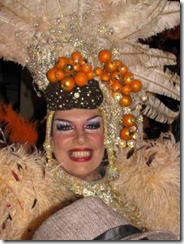 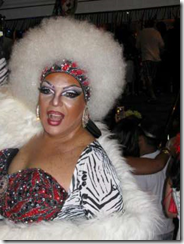 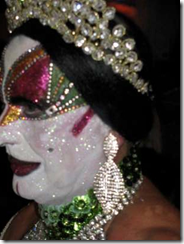 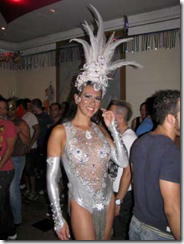 But, while some made and deserved grand entrances and particular attention, there were plenty of 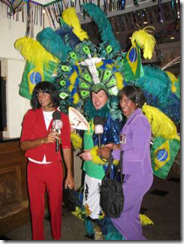 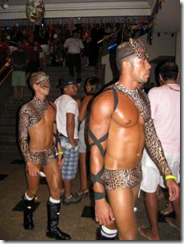 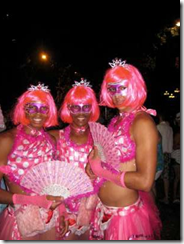 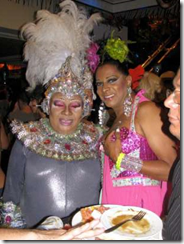 Overall, the Gay Costume Ball was quite a spectacle: a great culmination to our first, and in all likelihood, only Carnival celebration. Yes, we will probably return to Rio. We loved the city and the friendly people (despite our inability to speak the language or communicate, beyond a few words,with most of the people). But probably not to Carnival. Although it was certainly all that we expected—and in some ways more–how much spectacle and partying can boomers really endure :