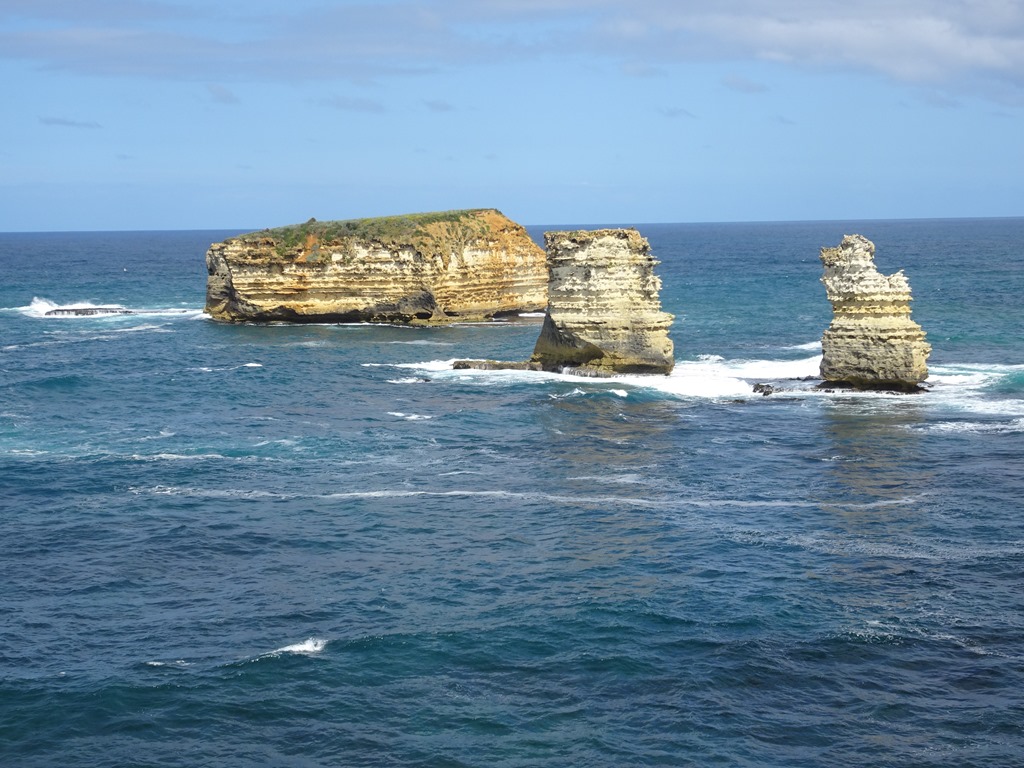 The Great Ocean Road is a famous route that takes you through breath-taking beauty along the south-eastern coast of Australia. Although the Great Ocean Road generally runs from Port Fairy on the west, to Queenscliff on the east, the most scenic stretch covers less than half this distance, generally that between Port Campbell and Apollo Bay. The 151 miles road was built along this remote, but beautiful seashore through impossibly difficult terrain between 1919 and 1932 by an Australian department store magnate who wanted to honor the 60,000 Australian soldiers in WWI and provide temporary employment to thousands of others who returned home without jobs. The result was the creation of one of the most beautiful coastal roads in the world and one of the most popular tourist sites in the country.

Although the road actually only touches the coast in only a handful of places, these places provide a fascinating glimpse at the incredible power of waves and how they sculpt limestone cliffs into amazing, alien shapes.

The journey begins at Bay of Islands, a cove, surrounded by wind and wave-sculpted cliffs that contain irregularly shaped stacks of rock in which different layers erode at different rates. 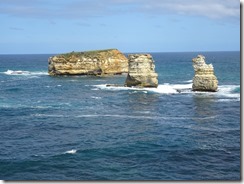 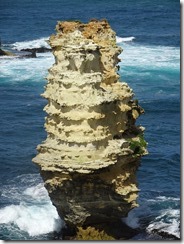 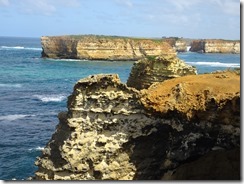 The coast gets prettier yet at The Grotto, a formerly swampy part of the headland in which draining water hollowed out the base, leaving the reaming rock to collapse into a bay that now highlights a perfectly-shaped arch carved into the cliffs. 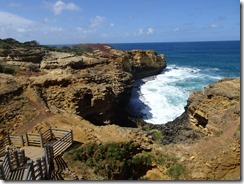 London Bridge, which erosion has since led to be nicknamed London Arch, lost the towering spires that apparently prompted its being named after the famous bridge. It, however, sits at a headland that plunges down to one of the most beautiful beaches on the coast. 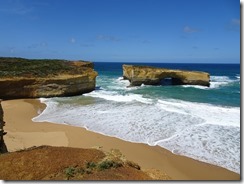 The aptly named, The Arches, provides yet another example of the ways in which winter storms wreak havoc on mere rock, both at sea level, and far above where driving wind and rain erode caves high on the cliff faces. 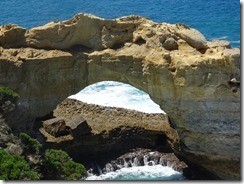 Two of the coastlines more magnificent sites are yet to come, at least as you drive from west to east, as we did. Loch Ard Gorge, a site where a number of sailors lost their lives in a shipwreck, was formed by erosion that cut down to two relatively solid blocks of stone that survived erosion from below to form an arch above a deep cave that literally roars as huge waves sweep through a narrow channel before they pound into the walls of Thunder Cave. 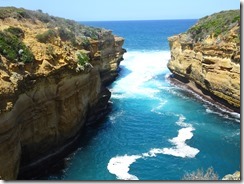 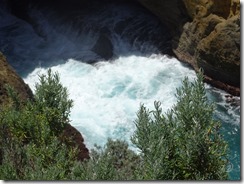 Then come the highlight and most popular site of the journey—the so-called Twelve Apostles, a line of huge, jagged limestone seastacks that line an idyllic coast of sheer, 200-meter cliffs that plunge down to beautiful beaches, with the stacks popping out of the deep waters. Although one of the Twelve Apostles apparently collapsed a decade ago, and not all can be seen from a single spot, such details do not diminish the majesty of the scene. After all, the forces that create and destroy these stacks are endless, They took tens of thousands of years to create. New ones are being continually created and existing one are continually being eroded. But all of this is occurring in accordance with nature’s schedule. Human schedules and perceptions are of no real relevance. 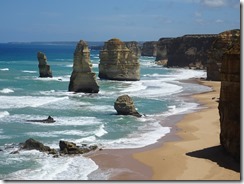 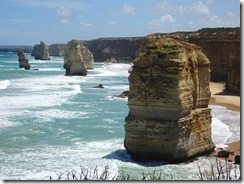 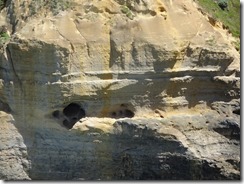 Although all are in awe of the beauty above the surface, interpretive signs tells us that we are experiencing only a fraction of the site’s true beauty. Much of the real beauty is below the surface. This, according to the sign, includes the huge sub-surface kelp beds and the fan coral that wave gracefully in the tides; the sponges and multi-colored hard coral and anemones that cling to limestone surfaces; and the rock lobsters, crabs, sea stars and sea spiders that lurk and hunt in the crevices.

Exactly how people brave the heavy surf, the pounding waves and the chilly water temperatures, we do not know. But based on our experiences of diving and snorkeling the reefs along the warmer Great Barrier Reef, we can only envy those who have the privilege of exploring this underwater world.

And that’s only the portion of the coast in Port Campbell National Park. About an hour after exiting this park, we reached Great Otway National Park, with its iconic Cape Otway Lighthouse and beautiful coastline. And as the saying goes, half of the fun is in the journey itself. The road is lined with eucalyptus trees, whose tender leafs are the favorite food of the thousands of koala bears who live in the area. Walking, slow driving and watching for parked cars with people pointing into the trees will often leads to sightings. Although the adorable bears often prefer crotches among the higher branches, a good telephoto lens, along with a cooperative bear, can yield magical moments. And, since the forest is also home to kangaroos, the occasional fatal encounter, with victims occasionally seen on the roadside. 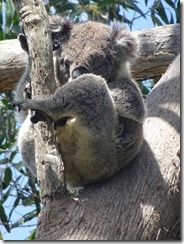 We made a brief stop in Apollo Bay for lunch (see restaurants below). We also stopped in Goolong, a coastal town that had attracted wealthy Melbourne residents to build second homes in the Victorian era. 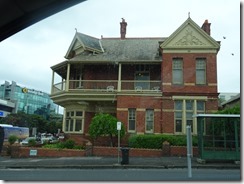 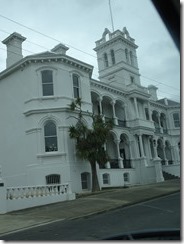 Our stop for the night was Queencliff: A small, Victorian-era resort town with a number of large, then luxurious resort hotels. A walk before dinner took us down the sleepy (read: deserted) main street, past a number of restored buildings that were all closed for the evening. The town, founded in the mid-19th century, is also the home of an 1860-era fort at the channel of a harbor that was originally used to protect the cities of Melbourne and Goolong, but is now used as an Air Force Cadet center. We found fewer Victorian resort hotels than we expected. Some of them, however, are quite large and judging from those such as the Queenscliff and the Vue Grand Hotels (the latter of which retains its grand dining room), they were quite elegant in their day. These days, however, has past and the hotels, like much of the town, appear as remnants of a bygone era. 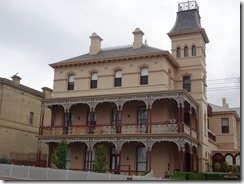 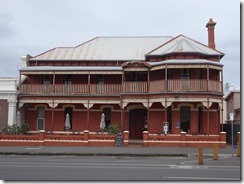 Eating Along the Great Ocean Road

As we exited the park, we stopped for lunch in the pretty beach town of Apollo Bay where we had a very good, and inexpensive lunch

Apollo Bay Seafood Café, a casual, very inexpensive spot at which you can view the selection of fresh fish and shellfish in the display case and order it either grilled or fried. The meals are served to your table with little fanfare—the seafood, a quarter lemon and parsley (unless you go all out and order French fries with your fish). We ordered fillets of butterfish and broadbill (like swordfish). Both were fresh, cooked perfectly, inexpensive and fast. What more could we look for?

We also spent that evening in Queencliff, where we had dinner. Although the town is not exactly a culinary mecca, the choice of restaurants is severely limited (to four, by our hotel’s count) on Tuesday evenings as most places were closed. We, therefore, chose our hotel’s own restaurant, at Athelstane House.We had two dishes from the limited menu: Broiled flathead tail (a fish that was offered as tempura-fried, but that Joyce preferred to try broiled), had little taste on its own. It might have been better with batter and fat from frying. Tom’s chargrilled eye fillet, with a non-descript herbed polenta, caramelized shallots and Pedro Jimenez jus was tender and tasty—at least the second version of it. The first version went back to the kitchen as it was overcooked. For wine, we ended up with a bottle of 2011 Ainsworth & Snelson “Victoria Avenue” Yarra Valley pinot (a bit too fruity for Tom’s taste) and a glass of acidic 2013 Whistle Post cab from Coonawarra.

Our night at Athelstane House was fine. Not great and not bad. Probably one of the better spots in town. Staff was helpful and location was good.