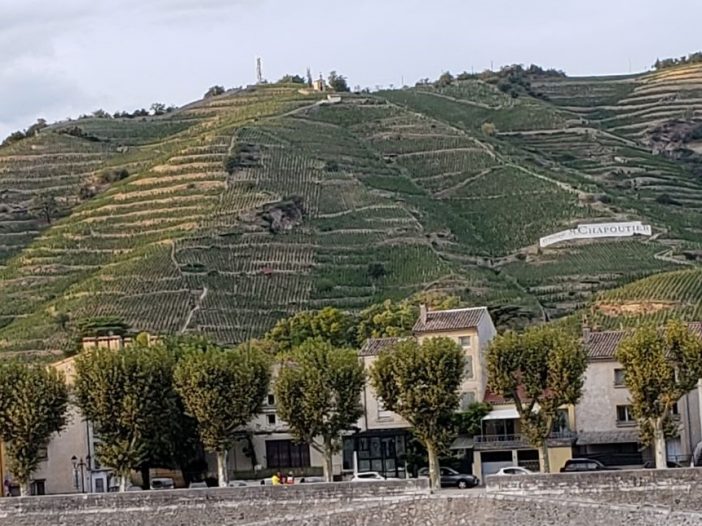 Hermitage is a French wine appellation on the east bank of France’s northern Rhone wine region (south of Lyon). The region is deservedly noted for its Syrah-based reds (the only red grape permitted in Hermitage wines).

Many of these grapes are planted on the minerally rocky granite and clay soils of the impossibly steep, terraced south-facing slope of the Rhone’s left bank. A small number of whites (especially Marsanne and Rousanne) are planted in the richer, alluvial, clay soils of the valley floor to the south and north of Tain-Hermitage under the huge signs of their grower/producers. (especially Chapoutier and Jabouletaine)

We stopped at two producers, both of whom produce biodynamic wines. As with most Hermitage wineries, both producers incorporate up to 3% white grapes into their reds the soften them. And, as is the case for most of the region’s larger wineries, both also purchase fruit and make wine from neighboring regions, such as Gigandos, Côte-Rôtie (which uncharacteristically permits the addition of up to 30% of white grapes in their reds) and Chateauneuf du Pape.

We started at M. Chapoutier by first touring the lower sections of the red grape vineyards. Yes, those hills are steep!

Then it was on to the tasting room. We started with their whites, for which the winemaker prefers and uses only longer-aging Marsanne. We both enjoyed the crisp, rather austere, barrel-fermented, stainless-aged 2021 Les Tanneuss. Of the fuller, rounder, oak-aged whites, Joyce gravitated to the 2019 Les Garanilities while Tom preferred the 2018 Chante-Alouette.

Of the reds, we were both drawn to the oak-aged wines rather than the concrete-aged 2020 Coze-Hermitage Les Meysonniers. We also enjoyed the 2019 Les Arenes, which sees 12- to 14 months in large, neutral oak tanks, and especially the older, more rounded 2017 Sizeranne. Not, of course, to say that older is necessarily better. We both found the oranges, brick-colored 2008 (not a particularly great year) Le Pavillon somewhat over the hill and lacking in character.

Next was our stop at Paul Jaboulet Aîné. We found the Marsanne-based, stainless-aged 2021 Le Grand Pomdec to be interesting but generally gravitated to the 2019 Chevalier de Sterimberg. The Marsanne (70%)/Roussanne (30%) blend had eight months in oak, 20% of which was (uncharacteristically for Rhone) new.

We stayed in Tain L’Hermitage which is across the river on the Rhone’s right bank. Tain Hermitage is home to most of the town’s 14th-17th-century buildings and historic sites including the 16th-century Castle/Museum. Our hotel was the lovely restored at Hotel de la Villeon.

Most of the restaurants and all of the vineyards and wineries, however, are on the more modern Left Bank where we ate and tasted.