Sometimes we forget history and it takes a good play to remind us.The Jungle is one such play. It reminds us of the horror that African and Middle Eastern refugees faced when they fled their countries in hopes of gaining amnesty in England. Twp. men who volunteered and created a theater at a temporary refuge camp in Calais (from which refugees hoped was only a stop on their way to England) wrote this play about how an ad hoc community grew to more than 4,000 residents from dozens of different countries. Despite their very different backgrounds and the traumas they endured in treks and trafficker-led boat rides of more than a thousand miles, the migrants created what is portrayed as an amazingly congenial and caring community with relatively few conflicts.

The sold-out production played in only three cities: London, New York and San Francisco. We were lucky to get tickets for the San Francisco production.

The production required a totally custom-designed setting for the theaters in which it played. The cushioned seats of the “orchestra” section of the theater were replaced by wooden benches and tables to mimic a restaurant in the camp. The actors performed on the maze of table tops that snaked in and out of the rows of benches. The audience on this level were part of the show. For example, some audience members were served food from the restaurant. Others were given flashlights to shine on the actors. The actors were continually moving through the audience, making one feel like part of the action. 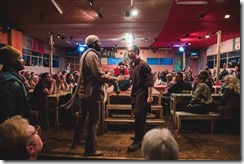 The play itself dramatically portrays the stories of the traumatic lives in some of these migrants’ home communities and their journeys to Calais, the privation and chaos they experienced in the camp, their aspirations for a better life. The actors, including some who actually resided in the camp, portrayed how the migrants and a handful of well-intentioned, but ill-prepared British volunteers struggled against privation, uncertainty and the lack of concern of British, and in some cases outright hostility of French authorities to create a mutually caring community.

Filled with dozens of evocative characters and their portrayals of the day-to-day existence, the constant motion, confusion and stress of camp life and the inevitable fights and occasional celebrations make for a totally absorbing theatrical experience that provides as vivid and poignant a portrayal of migrant life as many of us will ever experience.

Even with this, we can only vaguely imagine the traumas the camp’s residents—not to speak of all migrants–have endured in their previous lives, their decisions to leave family and friends, the horrors of their tortuous journeys and the continual threats of eviction by their unwelcoming French hosts.

And then there is the total uncertain futures that lay in the hands of unseen others. Will the French government carry through on their ongoing threats to destroy their camp and deport its residents? Will England, or any other country ever accept them and what type of life will they experience if they do? Will they be forced to return home, or to remain as stateless wanderers? We, as they, do not know. But, as we learn at the end, the French government eventually made good on their threats to close the camp. What will become of the residents? We, like they themselves, do not know their fates.

Although such a tale can never have a neat, much less an uplifting ending, this extraordinary production did give us a greater appreciation of these migrants and what they have and continue to endure. We are thankful to have had a chance to see it. It’s a shame that its very limited run will make it available to so few others.