Jackson Hole is the valley encompassed by the Teton Range to the west and the Gros Ventre Range to the west. Fur trappers originally inhabited Jackson, followed by homesteaders. Today this 10,000 person town, is (along with the neighboring Teton Village ski resort) the entertainment, cultural and culinary center of Jackson Hole.

The increasingly affluent area retains some of its historic, Wild West character. Its town square is framed by late 19th– and early 20th-century buildings. Sidewalks are wood, elk antler arches frame the entrance to the square and Western-themed restaurants/bars such as the Million Dollar Cowboy Bar encourage you to literally saddle up to the bar (you sit on saddles instead of stools. 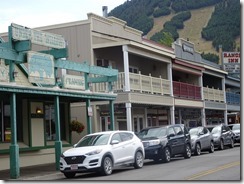 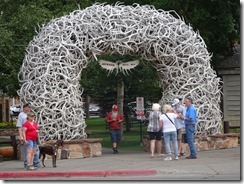 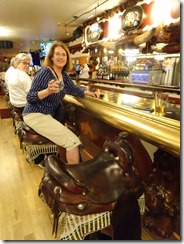 It is a good place to stop before heading into the national parks and gets you in the mood for a western adventure.

Blue Lion provided our only Jackson dinner opportunity. And it proved to be a fortuitous choice. We had two wonderful dishes: grilled elk tenderloin on a wild mushroom port sauce, and the restaurant’s specialty, roasted rack of Dijon mustard-rubbed and bread crumb-crusted lamb with peppercorn-rosemary cream sauce. The wine was also a treat: a 2016 Treana Red, a cabernet sauvignon/syrah blend from Paso Roblas.

Million Dollar Cowboy Bar. While we didn’t eat here, we couldn’t resist a saddle seat at the bar. Here Tom stuck with another local beer (a Snake River Pako’s IP), while Joyce got a pinot grigio.

We stayed at The Lexington at Jackson Hole Hotel & Suites. We were on the second floor. Unfortunately, there wasn’t any elevator. Once in the room, it was very dark but comfortable. Breakfast was a nice buffet in the main building. The location was just blocks off of the main square and was nice and quiet. Plenty of free parking. We did not use the swimming pool

Although we enjoy Jackson, the Grand Teton mountains were our primary interest in northwestern Wyoming. The iconic peaks, its string of valley lakes and the surrounding valley and backcountry areas are, to our eyes, one of the most majestic spots in the country.

The Tetons are underlain by some of the oldest (2.7 billion years) rocks in North America. Yet they are the youngest major range in the continent. A shallow ocean once covered the Range and the valley. However, tectonic forces, including the collision of plates and millennia of earthquakes, lifted the sedimentary rock of the mountains and simultaneously depressed the valley (Jackson Hole). Corresponding rock layers varied by 30,000 feet from the bottom of the Hole to the 12,000- and 13,000-foot cliffs. As if these forces weren’t enough, some 2 million years ago, 3,500-foot glaciers further depressed the Hole and scraped the mountains into sheer cliffs. The residue was deposited in moraines, which created the string of lakes that frame the mountains.

As we have visited the Tetons multiple times, this trip was a short day and a half where we focused on hiking trails. 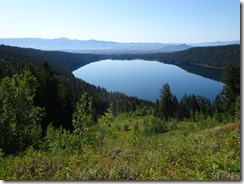 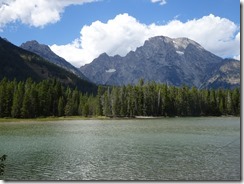 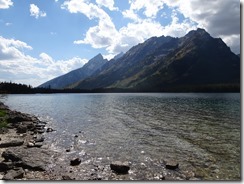 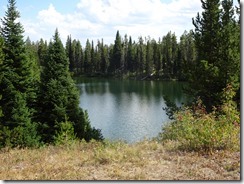 We ate and stayed at Jackson Lake Lodge, with its beautiful, panoramic view of the entire range on the western edge of the park. A view that is particularly lovely at sunset. 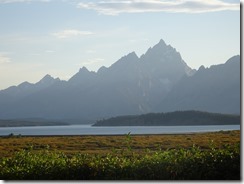 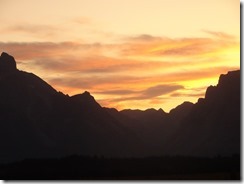 The rooms were very nice with a surprisingly comfortable bed and linens. The room did not have air conditioning, but the nights cool down nicely. The room’s overhead fan did help stir the air at night. The only negative was that the hot water ran out at the end of the shower. The room had a coffee/tea maker and we had a little patio outside our room. Our room was on the second floor of a building….no elevators.

Our dinner was at the lodge’s Mural Room restaurant. Not surprisingly for many national parks, the food was acceptable but less than inspiring. We shared two of what are normally our favorite regional dishes—Idaho Ruby Red Trout (on a bed of roasted corn, lima beans, red peppers and pancetta with almond romesco sauce and sage) and Grilled Elk Loin (with roasted Brussel sprouts, Burgundy-sauteed mushrooms, and cherry compote). The best part of the meal—other than the view—was a bottle of 2013 E&J Gallo Signature Series Santa Lucia Highlands pinot noir.

Right next door to the Teton National Park is Yellowstone National Park. From a park with some of the most majestic mountain scenery in the country (Teton)  to one with a variety and a greater number of geothermal features than those in the rest of the planet combined (Yellowstone). And all within a few miles of each other.

Yellowstone was the first U.S. National Park. It has more than 10,000 geothermal features and the overwhelming majority of the world’s geysers. The Yellowstone basin is actually a dormant (but far from extinct) volcanic caldera that has had at least three “Super-eruptions” (with the largest being 250 times more powerful than the 1991 Mt. Pinatubo eruption) in the last two million years. The most recent eruption (640,000 years ago) resulted in an ash cloud 3,000 times that of Pinatubo and formed a 1,350 square mile crater (larger than the size of Rhode Island). While dormant, it is far from extinct. Its ongoing activity is witnessed by the level of its current geothermal activity which is fueled by a magma chamber located a mere three- to eight-miles below the earth’s surface. Scientists believe it is certain to erupt again in the future. It’s a matter of when, not if.

Its ongoing volcanic activity manifests in five primary ways, all of which are evident in different sections of the park. These are:

The form that each of these features takes depends on a combination of the amount of water that is available (via combinations of underground springs, rainfall and snowmelt), the heat of the rock (which heats the water), the underground plumbing system (which continually changes with changes in the water’s mineral content, and especially earthquakes—of which Yellowstone has the largest number of any place on earth.

And as if this weren’t enough, acidic hot springs create an environment in which two types of “thermophiles” (heat-loving microbes, bacteria, algae, and archaea) produce energy either by using sunlight to perform photosynthesis (cyanobacteria) or by consuming chemicals (filamentus bacteria). These microscopic organisms connect into strands that combine with other waterborne minerals and organic materials to form mats that can take on vivid colors (white, orange, red, green, brown and so forth) depending on the types of microbes, the temperature, and acidity of the water and their exposure to sunlight.

These thermophiles create their own ecosystems, as with the tiny ephydrid flies that feed on them, the spiders that eat the flies and the birds that eat the spiders. These thermal features also shape the lives of much larger organisms: birds, beavers, elk, bison, and wolves have access to food during the winter since the heated land reduces the depth of the snowpack and provides more access to grass.

Yellowstone is a huge park with dozens of different environments and thousands of features. Since we have been through the park several times in the past, we selected only a handful of stops that provided the greatest opportunity to sample a number of the park’s most interesting features. These included, generally from south to north: 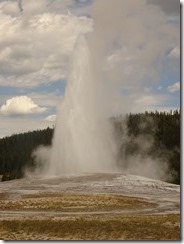 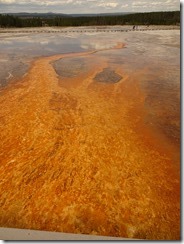 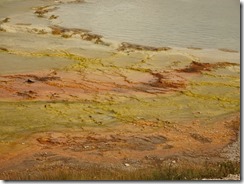 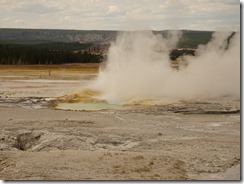 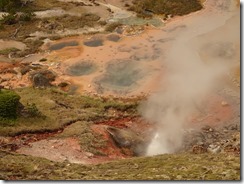 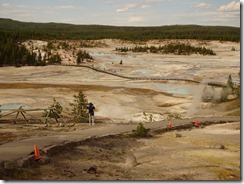 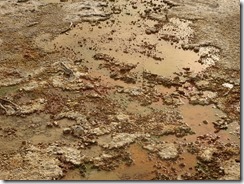 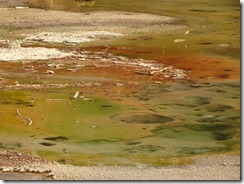 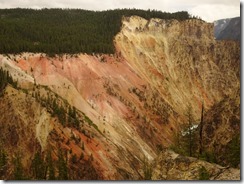 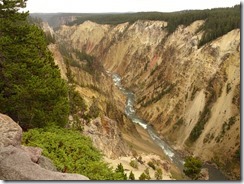 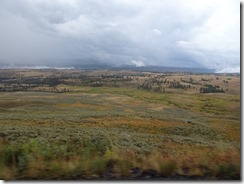 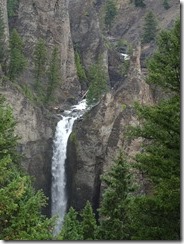 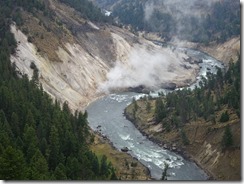 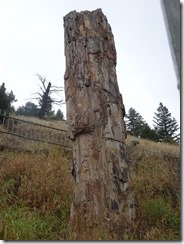 We didn’t expect, nor did we get any gourmet meals at the park’s restaurants. Our very limited sample of restaurants included that included:

We stayed at the Canyon Lodge in Canyon Village. As with most national park hotels, the pricing is high for what you get. But this price/value was extraordinary out of synch when compared to other hotels in national parks. Yes the buildings are leeds certified. And yes, we wanted the location. But the linens were very scratchy. We were surprised that a new place did not have an overhead fan. The small tabletop fan placed in the room had little effect on moving the air at night. The only good point was that they did have an elevator which helped as we were on the third floor. Due to the location, we would stay again. But if we had other choices, we would try something else.