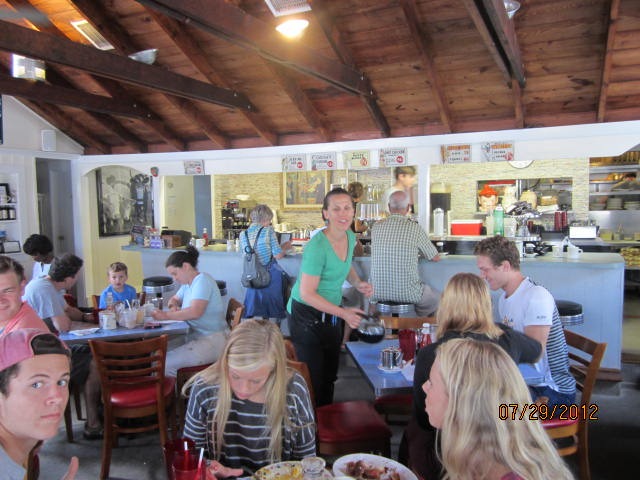 Although we typically stay in Edgartown, this trip, we did something different: we stayed in Vineyard Haven’s 1720 House inn, which became our base of operations for this visit.

Vineyard Haven is a cute town, with a scenic harbor. While Main Street is filled with interesting shops and galleries, our favorite gallery is located on the less scenic Beach Road, where the Seaworthy Gallery houses a selection of Jeffrey Serusa’s giclee-method marine photographs. Although the town is not particularly well endowed with restaurants, we evaluated two highly recommended very popular places for a casual lunch:

Although we also looked at Black Dog Tavern (a place that is immensely popular with tourists, but to which locals would never go), it held no interest for us. There are, however, two things that did hold great interest–an afternoon and e ending in the town of Oak Bluffs and on the next day, renting a bike for the lovely ride to Edgartown.

We love walking around this charming town, filled with gingerbread Victorian cottages and mansions. This character derives from the town’s history as a Methodist religious retreat, beginning in the mid-19th century. The central meeting area was initially surrounded by temporary tents in which church members would way. The meeting area has since been replaced by the more formal Tabernacle, and the tents by concentric streets filled with hundreds of small, brightly painted, gingerbread cottages. The Tabernacle is now used primarily for community events and the cottages, as ornate and brightly painted as ever, are now primarily used as family vacation homes or summer rental properties. And, as evidenced by some of the outdoor art in the years, it is clear that some of the owners also have some quirky senses of design and humor. Closer to the water are large, nicely maintained parks that are surrounded by ornate mansions from the same period. And since Oak Bluffs is also a party town, the harbor is lined by cruise and pleasure boats on one side and lively, usually packed bars/restaurants on the other. The town’s main street, Circuit Street, is lined with the typically resort shops (souvenirs, clothes, ice cream parlors and of course, a fudge shop), primarily inexpensive restaurants and, at the base, the ever-popular Flying Horses carousel. The town also has a couple upscale restaurants. We had reservations at the Sweet Life Cafe, where we had a pleasant al fresco dinner (a wonderful lobster with cannellini, chanterelles and corn in a lobster au jus and a somewhat less satisfying butter-poached lobster with chanterelles and corn custard). Since we had a half hour before the start of our play, we joined the long line at Back Door Donuts–the back door of a donut shop that gets a head start on selling the next-day’s donuts by selling them still warm, fresh out of the oven. Our evening’s entertainment was the Vineyard production of the Off- Broadway show, "Through the Night." Written and performed by Daniel Beaty at the Union Chapel, a beautifully restored, 1833 Methodist Meeting Hall. The play, which ran Off-Broadway in 2010, has Beaty portraying six primary and a number of supporting characters shaped by his own experiences growing up black in a drug-infested section of Dayton. While the experiences were touching and the acting, poetry and signing were quite good, it was sometimes difficult to follow the character transitions and the physicality of the acting seemed to distract from the story.

And since we weren’t quite ready to go home, we stopped for a nightcap at the lively Offshore Ale Company brew pub, with its wide selection of home-brewed. Beers and ales and unlimited supply of peanuts.

Edgartown is our favorite town on the island. Biking is our favorite form of island exercise. Although we usually stay in Edgartown and bike to and back from Vineyard Haven, we decided to introduce some variety into this trip by staying in Vineyard Haven (home of the Black Dog, at which we have never quite gotten around to eating).

We rode from Vineyard Haven along the lovely East Chop Drive, with its stately homes and lighthouse, through Oak Bluffs, and along the island’s lovely bike path between the shore and marshes to Edgartown (about 12 miles each way). We spent the rest of the day and early evening doing some of our favorite things in town. We arrived in time for lunch. And, since we had another hankering for fried belly clams, went to the top deck of the popular Seafood Shanty, snagging a seat at the rail, with a beautiful view of the harbor, Chappaquiddick Island and the two tiny ferries shuttling continually back and forth, carrying cars and bikes from the town to "Chappy’s" remote, pristine beaches. After eating and taking in the views, we were off for a walk through the white-painted downtown, which is filled with lovely historic buildings (such as the Old Seaman’s’ Church and the Daniel Fisher House) and gardens. Then, a stroll along one of the town’s beaches (looking at the harbor on one side and the beautiful homes on the other), a brief dose of history and island relics at the Martha’s Vineyard Museum and a self-guided tour of the town’s many galleries. We were particularly intrigued with the North Water Gallery, which had just launched a show for the oil paintings of the above-mentioned island artist. We were particularly intrigued by one painting and by a catalogue image of a mixed media work that was to be displayed at a soon-to-open exhibition at a sister gallery, the Field Gallery in West Tisbury (see our Return to Martha’s Vineyard blog). This required some thought, and as luck would have it, it was cocktail hour. So, we took the short, scenic walk down Dock Street to our favorite island cocktail spot–the deck of the lovely Harbor View Hotel. After a short detour out to the Edgartown Lighthouse, we snagged a couple rocking chairs on the gracious wrap-around deck, ordered a couple glasses of wine and stared at yet another view of the lovely harbor. We then began to assess and plan our course of action for evaluating a potential addition to our art collection. After another brief stop at the gallery, we were off for our early dinner reservations at what, after many experiments, has become our favorite island dinner restaurant–Atria. We had to begin with the seared foie gras with butter poached lobster, along with a glass of sauternes. For entrees, we both ended up with huge dishes: the grilled swordfish with dill whipped potatoes and the two-pound crispy wok-fired lobster with citrus butter and potato puree. All with an Adelsheim Pinot–and all wonderful.

In Pursuit of Our Island Memory

Much of our third day was dedicated primarily to evaluating the Traeger di Pietro painting with which we were so intrigued at an Edgartown gallery. While we found one painting we loved, we saw another in a brochure with which we were also intrigued. This painting, however, was in a West Tisbury gallery. So, we spent the morning and had lunch in Vineyard Haven (aka Tisbury) before doing a gallery and farmer’s market tour of West Tisbury and going on to Edgartown, where we spend the rest of the afternoon, until having to leave for the airport.

While we decided against the painting we had come to see at the Field, we had plenty of time to return to Edgartown’s North Water Gallery to evaluate the first one that so attracted us. After one more trip to the Harbor View for a drink over which to contemplate the addition to our art collection, we left the Vineyard, a bit monetarily poorer, but richer in experiences–and in art!