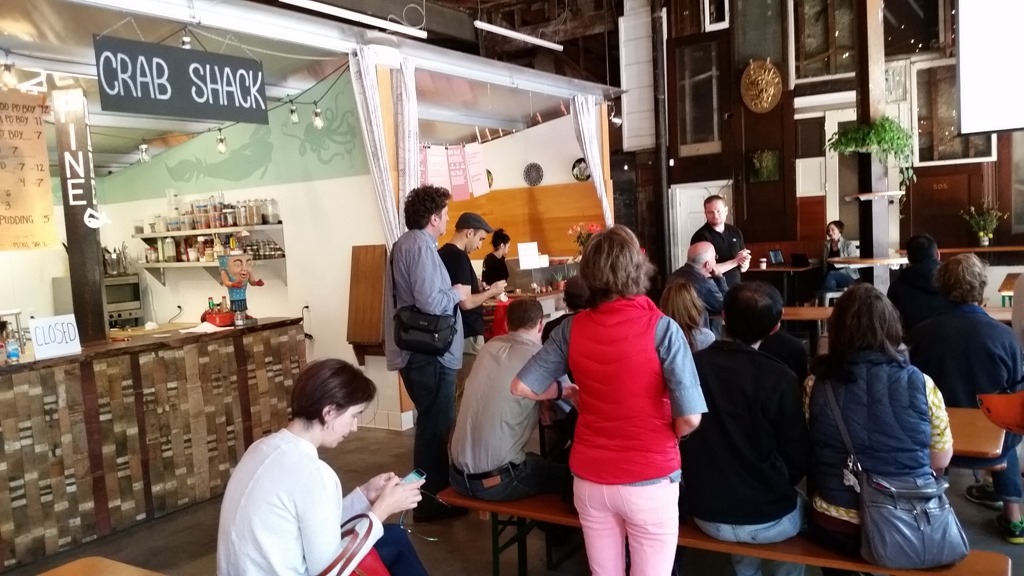 This is the first of a two-part series of articles on the transformation of San Francisco’s traditionally rundown and economically depressed Mid-Market neighborhood (the section of Market Street between the Union Square shopping district and City Hall). This article focuses on the neighborhood’s commercial and especially housing renaissance. The following blog will be on its artistic renaissance.

San Francisco Housing Action Coalition (SFHAC) is a group of not-for-profits that represent all facets of San Francisco’s housing community that are working together to develop policies intended to increase the production of new homes. The group runs a series of walking and bike tours to neighborhoods experiencing particular housing growth. Each tour features presentations and Q&A opportunities from developers of large or otherwise noteworthy complexes.

We recently took one a tour of the Mid-Market Renaissance, which provided a deep dive into four of the large residential complexes being built (or being rebuilt) in the area—from those in different stages of the permitting and pre-construction process, to a brief tour of one building, at 100 Van Ness, which is already renting. The tour was generally infused with an overview of the payroll tax break that was so successful in attracting more than a dozen technology and venture capital companies (Twitter, Uber, etc.) to make major investments in and bring thousands of workers into the area.

Although the debate over the wisdom, the value and the ultimate effects of this tax break continue, there is no debate that the previously dilapidated, crime-ridden and seedy mid-market district is undergoing a renaissance. For example, as explained in San Francisco Business Times, neighborhood storefront vacancies have been slashed in half to 16 percent and more than twenty new small businesses and eleven new arts venues have opened over the last three years. And this doesn’t even include the 250,000 sq. ft. Market Street Place luxury shopping mall (still in construction) nor the hot restaurants that have already been opened (including Famer Brown’s, AltaCA, Dottie’s and Show Dogs).

Nowhere, however, is this renaissance more pronounced than in housing—the primary focus of the tour. More than 5,600 units have either been approved or are currently under construction and another 4,000 have been proposed. The tour stopped at seven different sites that either under construction or in varying stages of the permitting process. All will be mixed use developments with retail, public art and car and bike parking, and all will offer subsidized (typically between 12 and 20 percent) as well as full-price units. Most will consist of relatively small (typically averaging around 600 sq. ft.) studio and one and two bedroom apartments. A few will be condominiums.

Most developments will consist of 10 to 12 floors—up to the current zoning limit of 1,200 feet, with the first floors consisting of retail, and in the case of 950-974 Market, a public art space, and the upper floors housing. Given the proximity to businesses, mass transit (BART and MUNI trains, streetcars and buses) and bike lanes, car parking will be limited (to generally about one space for every three to four units) and some of this will be devoted to car share services. Bike parking, on the other hand, will be extensive, with some developments offering one space per unit and one even considering adding bike hooks in each unit for secured storage of high-end “weekend bikes”, in addition to the more open parking of their day-to-day city bikes.

One of our tour stops, at 1028 Market, included a stop at an innovative interim use spot that is making productive use of the street-level space during the permitting process. Since the current building is intended to be razed when permissions for the new building are approved, the current retail space would have sat vacant. Instead, the developer created The Hall, an innovative temporary food and drink venue that allows local, low-income chefs a low-cost means of testing and tailoring their menus and identities. (Although the venue will close when the building is razed, the concept is intended to be transferable to other sites.)

Mid-Market’s housing plans are nothing if not ambitious. But are they too ambitious? What is the likely demand of all these new homes? It’s not possible to anticipate the state of the economy, much less demand for housing in this small slice of the city in 2017, when most of the new projects are likely to be completed. However, to the extent one can extrapolate from the present, signs are encouraging. Recently completed complexes, such as NEMA, and the soon-to-be-completed 100 Van Ness are renting rapidly. For example, 100 Van Ness, which we visited on our tour, claims to have rented 39 percent of its units within the month and a half in which they have been available. And no wonder as the units have great views and high ceilings.

Then there is the other question. With all of this development—both commercial and residential—the Mid-Market and adjacent Tenderloin and SOMA neighborhoods are in for some big changes. These areas, which currently house large segments of the city’s lower-income population, cannot help but to be changed as thousands of mid- and upper-income individuals work and live in the neighborhoods. The area is, indeed, already being visibly cleaned up. Graffiti-riddled walls are being replaced by commissioned street art, rundown buildings and storefronts are being rehabilitated, low-cost liquor stores and sex businesses are closing and crime rates are falling.

But what does it all mean to the people who currently live, work and shop in these neighborhoods? The small businesses and the not-for-profits that are being priced out of a gentrifying neighborhood? The low-priced Single Room Occupancy (SRO) hotels whose owners will be tempted to sell-out to more profitable, higher-end uses? After all the more mid- and upper-income people who work, and especially live in the neighborhood, the more conveniences they will demand and the less “squalor” they will tolerate. Can these diverse neighborhoods coexist or will lower-income residences and businesses which cater to them be displaced—and to where?

Next week’s blog focuses on the neighborhood’s emerging artistic and cultural live: the Mid-Market’s Art Renaissance.