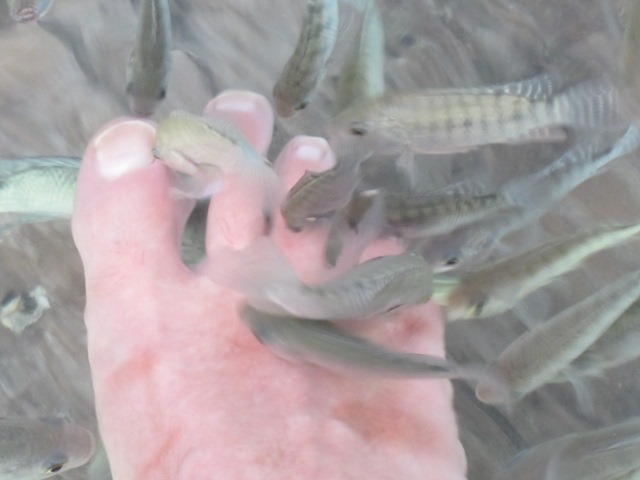 Although the city is known primarily for the ancient ruins that surround it, the Siem Reap area has more the temple ruins. It has some fascinating museums and pretty much all the restaurants and nightlife you may need after a busy day of culture and entertainment. And, oh yes, let’s not forget the fish that clean your feet (it tickles). But let’s face it, the number one, two and three reasons that people flock to Siem Reap is to view its ancient (9th – 13th century)  temples of Angkor Wat, Angkor Thom, Ta Prohm and any number of other lesser known, but similarly impressive temples.

The temples are located well outside the city and are significant distances from one another, so walking to or between them is out of the question. We chose to take a bike tour with a private guide to visit (you can also take group tours, taxi or tuk-tuks). Actually, we chose two bike tours with a private guide. One focused on a handful of well-known temples that are relatively close to each other; the so-called Small Circuit. The second on a group of somewhat further out and more dispersed temples; the Grand Circuit. After researching the options, we chose to do both with Camouflage Cambodia (www.camouflagecambodia.com). Even these two days, however, allowed is to see only about a dozen of the more than three dozen sites in the 160 sq km historical park.

Angkor Wat conveys a mystical image of huge, lost ancient temples that have been swallowed by the jungle. But while Angkor Wat is certainly the largest and the best known of the ancient Khmer temples, the jungle has been cut away from it and it is only one of dozens of huge sites built by the Khmer empire during its four-century-long reign. In fact, the images that come to mind when thinking of Angkor Wat, thanks to Hollywood,  are more likely to be the giant trees and vines encircling Ta Prohm or the haunting four-face Buddha (representing Buddha’s love/kindness, compassion, sympathy and equanimity) that grace the towers of Angkor Thom, than the majestic central tower of Angkor Wat. But a tour of the Small Circuit allows you to see all three of these iconic sights, plus a number of others.

Our bike tour, which covered about 20 kilometers and took about nine hours, took us to all three of these plus some smaller, less well known, but similarly iconic sites such as Prasat Chrung and Toi Nei.

Angkor Wat, constructed in the mid-12th century as a Hindu temple dedicated the Vishnu, is an awesome sight. As the largest religious monument ever built, it covers a total of 81 hectares, is surmounted by five giant towers (with the tallest climbing up 180 feet from ground level) and surrounded by enclosing walls and a 5 km long (190 meter wide) moat. Its walls are covered with more than 1,000 square meters of bas relief carvings that depict scenes from Hindu mythology. Angkor Thom, which was completed in the early 13th century, was a royal capital and the last capital of the Angkor empire. It’s a Buddhist Temple that covers an even larger area than does Angkor Wat. It is surrounded by a 12 km moat and contains the still grand ruins of Bayon; one of Khemr’s largest and most beautiful a temples. The 145-foot, three-tiered central pyramid (that served as the then king’s own temple) was originally surrounded by 54 smaller towers (of which parts of 37 remain). The complex is also noted for its four huge gateways (each decorated with three-headed stone elephants and four giant Buddha faces aligned in each of the cardinal directions. The Bayon complex itself has more than 2,000 such carved faces along with extensive bas reliefs that represent the king, a number of Hindu epics, daily Khmer life and an historic sea battle with the Cham (today, central Vietnam). Since Bayan took almost an entire century to complete, it mixes elements of different styles. Also, some of its carvings appear to be incomplete. These, however, are inconsequential distractions from what is one of the most impressive religious monuments ever built. And when in Angkor Thom, it is also worth searching out the Terrace of the Elephants, a gift from China that has a roughly 1,000-foot wall adorned with carvings of elephants.

Ta Phrom, a Buddhist monastic complex completed in the early 13th century, was built to control more than 3,000 villages. Although it has some lovely carvings, large parts of the complex were engulfed by the jungle and have been only partially cleared to allow tourists to understand how the jungle took it over. A number of the halls and towers were enshrouded in tangles of roots and vines, with trees growing out of windows and roofs. It’s a truly magical sight and one of the most intriguing temples in the entire historic area. We also visited a few smaller, lesser known Small Circuit temples. These included Prasat Chung, a small temple that we reached biking atop the southern wall of Angkor Thom. This small, largely 13th century Buddhist temple, while relatively unadorned, does have some interested stone carvings and provides a good idea of how temples looked before extensive restoration. Speaking of unrestored temples, Ta Nei is a 12th century temple that is relatively unrestored and partially covered with trees and vines–a good preparation for Ta Prohm. It also has some very good and very distinct carvings along its lintels.

A Grand Circuit Tour: Sampling a Number of Distant Temples

This 26 km ride covered a wide range of the many architectural styles represented in the complex. After a brief stop at Angkor Thom’s Dead Gate, we stopped at:

Preah Khan, a late 12th century temple in the Bayon style. This large complex, designed as a monastery and university and, for a while, housed King Jayavarman VII. It has a large royal family stupa and some lovely 13th century carvings of dancers. Although it was initially designed as a Buddhist temple, a number of the original Buddhist images were later carved over to represent Hindu images when a subsequent kong changed the official state religion.

Ta Som, a late 12th century Buddhist temple with some Hindu design elements and images, appears in some ways as a smaller version of Ta Prohm, with towers, its cruciform design and even a large hardwood tree, encased in fig vines, growing out of one of its towers. It also has some unique, well preserved carvings.

East Mebon, a late 10th century Hindu temple that was dedicated to Shiva. Constructed on an island in a one-time lake, the temple is a large, three-level structure built of lava stone and brick. It is capped by five impressive towers.

Phnom Bok, a 9th century Hindu temple that is built atop a mountain that requires a ten minute climb to reach the 637 steps that end in another ten minute climb. When you reach the summit. You are surrounded by three lovely towers constructed of stone excavated from another mountain that is several miles away. A walk around the summit takes you to a couple other interesting sites including a large linga (a phallic symbol that represents Shiva) and a 1979-vintage piece of mobile artillery that was given to Cambodia by the Soviet Union. And don’t forget the views that are an almost guaranteed reward for this type of climb.

Banteay Samre, a mid-12th century Hindu temple dedicated to Vishnu, is a large, relatively flat temple that uses a number of Angkor Wat-like design elements. It is graced by wonderfully carved, amazingly intact elephants, lions and nagas and has very nice carving on the false doors (meaning it looks like a door, but isn’t) on the north, south and west sides of its towers. Pre Rup, the last stop on our 25+ km ride, is a beautiful late 10th century Hindu funerary temple that is similar to East Mebon. It is graced with very nicely preserved carvings and a climb to the top is rewarded with good views.

Overall, two very educational days where we saw many sizes, types and styles of temples, in many different conditions. Our guide, who did a good job in explaining what we were seeing (although not always as clearly or concisely as we would have wished),also took us on a couple of interesting rides, combining paved and dirt roads, narrow paths atop temple complex walls and even over a dam. A very worthwhile, if tiring way to spend two days.