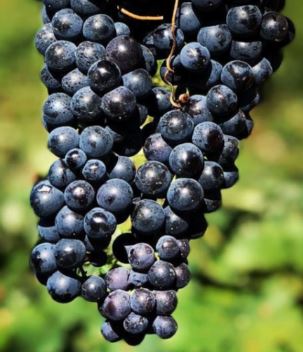 The region that is now the country of Georgia claims a number of firsts:

In fact, the Georgian name for wine, “Ghvino” is thought to be the origin of the words “Vino” and “wine”. And it continues to produce wines today.

The country of Georgia is located in southwestern Asia. The Black Sea borders it to the west, Russia to the north, Turkey and Armenia to the south, and Azerbaijan to the southeast.

The country has also been generously endowed with a range of grapes from which to make its wines: more than 500 varieties of indigenous grapes (nearly one-sixth of the world’s grape varieties) of which commercial wine producers use about 38. But despite this variety, two native grapes dominate Georgia’s production of both single-varietal wines and blends. These are the white Rkatsiteli and red Saperavi grapes.

The Saperavi grape originated in Georgia’s Kakheti region. It is the oldest of the country’s cultivated grapes and continues to be the most important and widely used of the country’s commercial wine grapes. While it has long spread across all of the country’s wine regions and into southern Russia, it has since spread to other Eastern European countries and even into Australia, and northeastern North America (especially the Finger Lakes and the Niagara escarpment).

The large, hardy, drought- and cold-tolerant Saperavi grapes have thin dark skins. They produce deeply colored wines with strong acids, an earthy, brambly fresh fruit taste, and alcohol levels of roughly 10.5 to 12.5%. They are used to produce single-varietal wines. But more commonly they are used as the base for blends, many of which have good aging potential.  The wines vary greatly among regions and producers and also by style.

They can, for example, be still, sparkling or fortified, and dry or with varying degrees of sweetness.

The Art of the Qvevri

Qvevri (or Kvevri) are large (typically about 800 litters) egg-shaped ceramic vessels that are used primarily for fermentation, aging, and storage of wines. They are also sometimes used to store other perishables such as grain, butter, cheese, and other beverages.

Qvevris are typically buried in the ground up to their tops which are covered with slate or wood lids and sealed with earth. This maintains the wine at stable and optimal temperatures. It naturally reduces the wine’s acids and tartrate and usually eliminates the need for chemical stabilizers.

Artisans use time-tested techniques to make qvevri. The exteriors of the earthenware vessels are washed with lime and covered by limestone.  The inside walls are washed, disinfected, and covered with a layer of beeswax to limit seepage through the clay.

Winemakers typically pour crushed grapes into the qvevri to ferment. While many leave the pulpy pomace in the wine during the aging process, processes differ. Vintners of Kakheti Saperavi, for example, generally remove the pomace before returning the wine to the qvevri for aging. Imeretian wines, meanwhile, press the grapes before pouring the juice into the vessel and then add one-third of the pomace to the wine. Some wineries mix juice and pomace of multiple varietals and others use the European method of fermenting without pomace.

Aging and gravity push seeds to the bottom where they are covered by lees while skins float to the top where they maintain contact with the wine. White wines are generally left on pomace for up to six months, which results in colors ranging from dark yellow to blood orange.

Wines can be stored in the qvevri for roughly two years, although some have been stored for up to 50 years.

The Recent Evolution of Georgian Wines

Georgia was one of the largest producers of wine in the former Soviet Union, led only by Moldova. The Soviets forced growers to produce quantity versus quality wines. Georgia wines were the most popular Soviet wines despite their production being concentrated around sweet bulk wines. The industry, however, went into a slump during the 1990s when the dissolution of the Soviet empire led to a depression and again after its 2008 war with Russia when it lost 96 percent of its export market.

Although domestic customers, Russia, and other former Eastern Bloc countries have resumed their purchases of Georgian wine the temporary loss of traditional markets prompted the country to up its game. It has dramatically improved wine quality and expanded production far beyond its traditional base of a handful of monasteries and thousands of small farmers who continue to produce wine via traditional methods. The number of modern, registered wineries has, for example, surged from about 80 in 2006 to over 1,000 in 2019. Georgian winemakers are also experimenting with a number of previously ignored native grapes in the hope of attracting new customers.

In addition to its improved quality and the growing interest in natural clay-fermented wines, customers are drawn to Georgian wines due to their reasonable price prices (typically $15-$30). The U.S., China, Israel, and France are among its key markets.

The Proof is in the Tasting

The Georgian Ghvino Forum in San Francisco recently showcased the Best of Saperavi wines. It gave us a chance to sample approximately 60+ Saperavi wines that currently are or soon will be available in the United States. The wines came from several dozen of the county’s best Saperavi-based wines from wineries located in all five of the country’s appellations.

Almost all of the wines were dry. These included Saperavi-labeled wines which are at least 85% from Saperavi grapes and Saperavi-based blends with any number of secondary grapes. Some were fermented and aged in qvevri, some in oak, and others in stainless steel. While most were fermented with their pomace, this was typically removed after fermentation.

Corus Imports, one of our first stops, provided an educational experience with tastings of three 100%, 2020 vintage Saperavis. One was fermented and aged in stainless steel. We particularly liked the neutral-aged Reserve Domaine Matthiers and the qvevri-aged Mosmieri Saperavi—both of which spent extended time on the lees. The qvevri-aged Mosmieri, meanwhile, had a distinctly earthy character.

Among our other favorites of the evening were:

We also enjoyed the only Saperavi-based sparkling rose of the evening—a 2021 Mtsvane Estate from Pet-Nat. Vazisubani managed to sneak one light reddish-colored, Rkatsiteli-based (with Mtsvane and Kisi grapes) “white” wine into the mix—its complex, somewhat tannin 2020 Estate “3 Qvevri”.

We also enjoyed some Georgian foods.

It was a very enlightening tasting and one that will help prepare us for our forthcoming 2023 trip to Georgia.