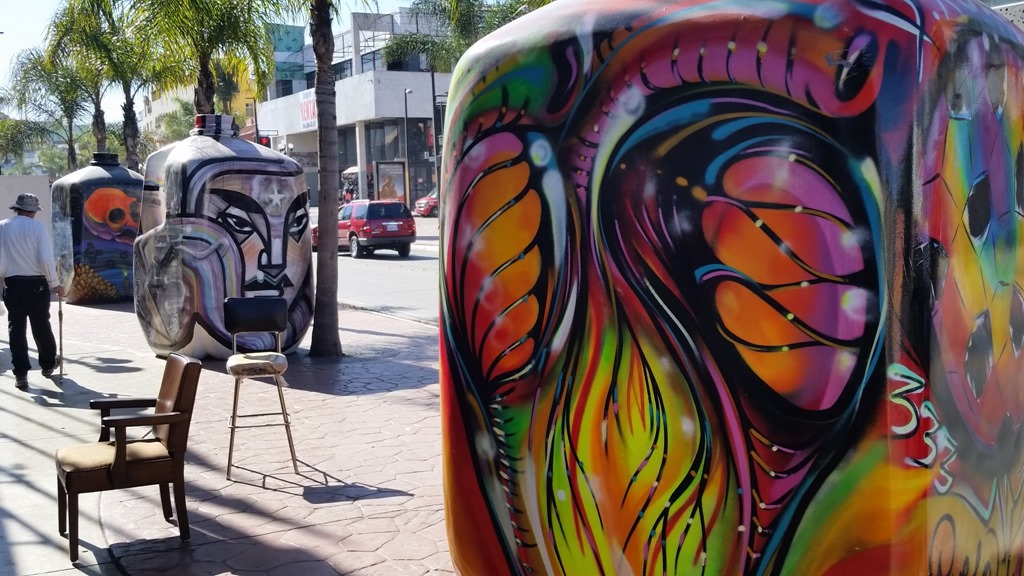 Tijuana is the most visited border city in the world. It is also the second-largest city in Mexico. Although we were once in Tijuana about 30 years ago, we thought it may be worth taking a day trip from our pre-covid visit to San Diego.

Getting there could not be easier…unless you do it as we did. We began with a comfortable, roughly 40-minute trolley ride from downtown San Diego to San Ysidro, which is a couple of hundred yards from a pedestrian-only border crossing. We got through the crossing in about five minutes. From here, 98-99 percent of tourists take a cab into the city. We decided to walk the roughly one-mile distance; a boring walk which despite a few signs, is very difficult to navigate and requires numerous requests for help from locals.

After detours and delays, we finally arrived in the center of town to find—pretty much nothing. The center of this 1.3 million-person city is a plaza marked by a large, stainless steel arch, a row of stone arches, and a traditional tourist shopping plaza lined with shops and restaurants. The surrounding blocks of and around Avenida de Revolution offer even less: More tourist shops and the occasional “zonkeys” (burros painted with black and white zebra stripes), but little else of interest—at least to us.

So after about an hour of wandering, we ended up on an upstairs deck at Rute (Route) 3 Bar and Grill (cash only) where we watched the street below while nursing a couple of margaritas and a small order of guacamole.

By then, it was time to Uber to our lunch reservation in the city’s Zona Rosa, a very different environment than in the center of town. This neighborhood houses some of the city’s best hotels and restaurants. These include our lunch destination (see below). After that, we took the easy way back to the pedestrian border (via Uber), where we sped through in even less time than it took to enter Mexico.

If You Go to Tijuana

We have traveled all over the world. In more recent years, we have found language issues in only one other place: Taipei Taiwan. Now we add Tijuana to that list. We had expected that due to the close proximity to the US and that Tijuana received so many American tourists, that English would be more prevalent among everyone we ran into. This was not the case…at least in the city center. Thank goodness for google translate. On the other hand, many Hispanics in California do not speak English, so it should not have been a huge surprise. But don’t let this keep you away. Stores and restaurants speak English.

Every place took American dollars. Maybe the rate could have been better, but this is normal if you use US dollars in a foreign country. You get a better rate at banks and ATMs. However, the convenience of not exchanging money in order to get a beer and then having left over pesos was worth it to us. Note: you may get pesos in your change but we received dollars back (at a low exchange rate).

Credit cards are also excepted at most larger shops and restaurants.

Uber is also available and it is a convenient way to travel without worrying about having pesos or speaking Spanish. Unfortunately, our Uber driver picked us up in a spot where it was illegal for him to stop. We stuck with him while the police pulled him over, called in more police (possible shakedown for $$??) and then finally let him (and us) go on our way.

Having done our homework in advance, our lunch destination was Mision 19,  the creation of Mexico star chef Javier Plascencia. We shared two appetizers and one entrée. After an amuse-bouche of tuna with avocado and chili oil on toast, with sour cream, we had the disappointing, to-be-deconstructed tuna parfait with avocado meringue, meyer lemon caramel, and cucumber. Then we had a much more interesting grilled octopus with elephant garlic jam, chickpeas, crushed pistachios, habanero sauce, and tomatoes. The entrée was pan-fried grouper (somewhat dry and lacking in flavor) with a very nice combination of smoked sweet potato puree, wild rice, chicharrones, and citrus butter beurre blanc. Although we generally enjoyed the meal, we wouldn’t rush back. Good thing since we have zero incentive to return to Tijuana.