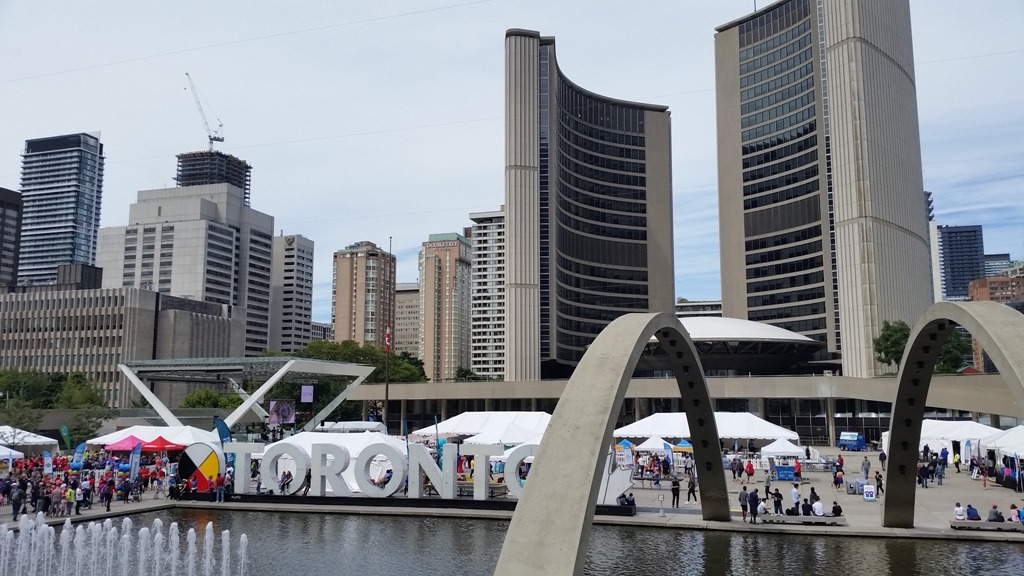 On our last trip to Toronto Canada, we toured a number of the neighborhoods. This time we focused on a few less-known, more out of the way attractions and returns to some of our favorite areas and some necessary shopping.

Toronto City Center is literally growing by leaps (upward) and bounds (outward). The downtown area is now dominated by modern towers and areas just outside the center are buzzing with activity. Cranes are everywhere and new towers are springing up around and on lots recently occupied by single family homes. All throughout are nicely landscaped parks and public art.

There is also a lot going on. The Saturday we were there, for example, we ran into five very large events, parades and festivals. These included the Toronto International Film Festival (TIFF), the March for Canada (one of the country’s largest charity fundraising events), a Greenpeace March, a huge Jesus in the City parade and a Protest against racism. While the marches typically ended in parties and concerts, the Jesus parade included floats, with singers and dancers performing Christian rock songs along the entire route.

Toronto International Film Festival (TIFF). The annual event is one of the largest film festivals that is open to the public. As evidenced by the large groups of people waiting along red carpets and limo parking areas (with no idea or when or if they would see a celebrity), the festival certainly draws its share of industry insiders and celebs. It, however, is one of the few major film festivals that allows the public (for a price) to see some of the roughly 300 limited and pre-release films that are shown in theaters throughout the central city.

King Street is Ground Zero for the festival. It is near the hotels, houses many of the largest theaters and is the site of promotional booth that attract long waiting lines with free snacks, gifts and make-up sessions. Since we did not even know that we were there the weekend of the festival until we arrived (although the outrageous hotel prices and difficulty in booking popular high-end restaurants should have given us a clue), we did not attend any of the openings. It was, however, interesting to learn of some of the movies that would soon be soon “coming to a theater near us” and to experience the crowds.

The Toronto Distillery Historic District is located on the southeast side of the downtown area. It is a commercial renovation of a large, 19th-century whiskey distillery complex. The roughly one square-block pedestrian complex houses several art galleries, boutiques, restaurants beer hall and course, an artisanal craft distillery. One building is dedicated to local artists, with a dozens of galleries and open, working studios.

This large and fascinating antique shop is jam-packed with all types of antique and estate china, crystal, porcelains, silverware, candle opera, serving platters, maps, prints and all types of unique items, including an old milkshake maker and a leopard-skin jacket. The selection is virtually unlimited—except for the one item for which we were looking. It is also a fascinating place to browse.

Toronto’s Village of Murals is  a collection of dozens of commissioned murals in Islington. Each mural portrays a piece of the history of the 200+ year-old village. Murals represent everything from portraits of the village’s founding families next to their gravestones in the old burying ground, to historic buildings, early landscapes, through the hosting of British soldiers and several fun, whimsical scenes such as swimming in the mill pond and a stunt in which a plane was hired to fly and drop coupons over a crowd watching a high school football game. Each mural, some more than 20×40 feet, is accompanied by a panel explaining the scene, the history and how it was funded. Although it is a ways out of the central city, if you are in the area, it is absolutely worth a stroll.

Since we managed to time our visit during Toronto International Film Festival, we couldn’t get into all of the restaurants that we wished. Those that we could get into, required us to dine at times that we may not have otherwise chosen. Even so, we did have several nice meals.

BOSK, the fine dining restaurant at the Shangri La, the hotel at which many of the TIFF Hollywood stars and execs stayed, was packed. While it typically serves a four-course menu, we shared three dishes and a bottle of wine between the two of us. (Neither of us could handle a fourth dish).Our favorite dishes were the seared foie gras with cranberry beans, celeriac and duck confit and butter-poached lobster with orso, pate and lobster bisque with brandy. Both were delicious and included much more foie and lobster than we had expected. The third dish, which paled only in comparison to the first two, was charcoal-grilled octopus with kohlrabi and perilla. We selected a wine that we that we just happened to have tasted and enjoyed the previous day at the winery: a 2014 Tawes Quarry Road Vineyard Pinot Noir.

lbs, a seafood-focused restaurant where we had two main courses: a whole, pan-fried red madai (mild, flaky, white fish from New Zealand) and lobster capellini with lobster béchamel sauce and bread crumbs. We also added a couple of sides of cheddar biscuits with honey butter and roasted Brussel spouts with maple syrup siracha and bacon lardon. While all were good, the lobster capellini stood out as our favorite. Both the main dishes were nicely complemented by a bottle of 2015 Seigneure de Posanges white Burgundy.

Luckee, a dim sum restaurant from Toronto’s most renowned Chinese chefs, provides its own, often very tasty twists on popular dim sum dishes. We tried six of these dishes, thoroughly enjoying four of them:

We particularly enjoyed combining the duck, leeks, watercress and apple with the foie and the marmalade. We were less enthused by the Xiao Long Bao soup dumplings (while we enjoyed the king crab and tobiko topping, we were not enthused by the soup). The greatest disappointment, however, was one of the highly recommended Kitchen Favorites, wild mushrooms fried in a special batter, which were dry and tasted only of the batter. Instead of our normal dim sum accompaniments of either tea or beer, we decided on a nice half bottle of Takaten Jin (Sword of the Sun) sake.

Bar Raval, a lovely, popular and very good tapas bar in the city’s Little Italy section. The corner building, open on both sides facing the sidewalks, retains traditional features, including the original pressed tin ceiling, while adding extensive and beautiful Gaudi-style carved wood highlights over the bar, beneath the ceiling and around the windows. After admiring the design, we eventually got down to ordering a few dishes from the small, but interesting menu. These were Galician octopus, ham croquettes and two more involved dishes: one a combination of wild mushrooms, blood sausage and egg yolk; the other squid, artichokes and romesco sauce. The atmosphere was delightful, the food very good and the service prompt and friendly.

Sheraton Centre Toronto Hotel was in a great location for us to walk to everything we wanted. It was a typical Sheraton Hotel. No surprises but comfortable.