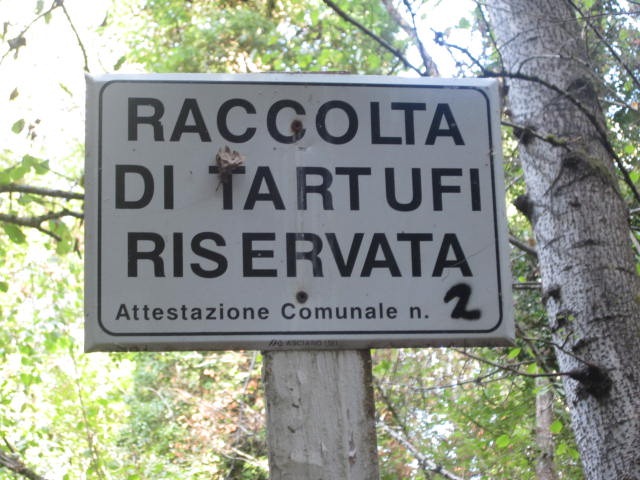 Tuscany is not the first place you think of as the source for truffles. But, while Tuscan truffles are certainly less well known than those in Piedmont’s Alba region, Tuscany’s San Giovanni d’Asso’s truffles are reputed to be "almost as good, but significantly less expensive.” The main reason that we decided to arrange a truffle hunting trip in Tuscany, however, was not because the truffles are less expensive, but because that was where we were.

Our hunt, which was followed by a four course truffle lunch at San Giovanni d’Asso’s Osteria della Crete (which arranged the hunt) was a unique, educational, and delicious experience.

We arrived at our meeting place, the restaurant at which we would later have our truffle lunch, at 9:30, the appointed time. We met our truffle hunter guide (Paolo), our translator (Veronica) and Paolo’s two truffle-sniffing dogs (Toppa and Milli). (Highly trained dogs have generally replaced pigs as sniffers of choice, since dogs are easier to train and transport and are easier to pry away from their discovery before they devour it.) But, while hunting with dogs may be somewhat less traditional, much of the mystery and mystique of truffle hunting remains.

We then off to the truffle grounds—through a gate into a section of forest marked with signs whose numbers indicated which of the region’s licensed truffle hunters were authorized to hunt. Our excursion took us through two different numbered plots:

From there, most of the work was left to the dogs and to the "Vanghino," the meter-long wooden tool with a curved brass blade that the hunter uses to extract whatever the truffles the dogs may find. The dogs must, of course, be specifically trained for their mission. Seven-year old Toppa is the pro. Milli, just one-year old is just learning. Training begins with the hunter training dogs to recognize the distinct smells of each of the three truffles in the area: 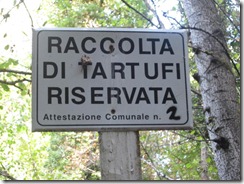 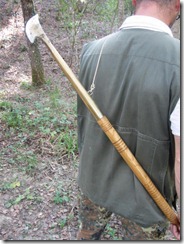 Once the dogs recognize these smells, and can distinguish edible from poisonous truffles, the hunter buries truffles in his own garden and trains the dog to find them. He then teaches the dog a range of commands and begins taking them on hunts with an older, more experienced dog who has already bonded with the young apprentice. Once on the trail, the hunter provides them dogs with continual feedback and praise. The real praise and rewards, however, come when they actually find the sought-after fungi (a distinct relative to mushrooms). He pets and hugs the dogs, allows it to smell the extracted truffle, and, after each smell, feeds them a biscuit, the taste of which they have learned to associate with the smell of the truffle. 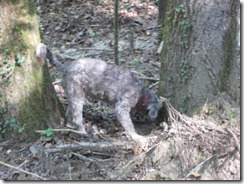 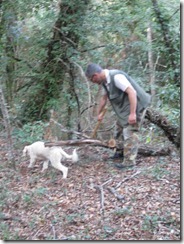 Our hunt began with an ominous warning. Truffles require lots of rain and humidity over the previous few months to develop. This summer has been very dry and the truffles have been sparse. After an hour on the hunt, we were even given the option of continuing or going back to town. We chose to continue and were glad we did.

Twenty minutes later, Toppa refused Paolo’s entreaties to return to our side of the dried riverbed. Then, up a very steep river wall, in a thick tangle of limbs and thorny branches, Toppa began digging furiously. While Paolo, not to speak of Joyce, Veronica and me, were reluctant to enter this morass. Besides, even the most experienced truffle dogs make mistakes. There are, as we saw from previous stages of the hunt, many false alarms, where Vanghino digs lead to naught.

Moreover, even if Toppa had discovered a truffle, would it be worth the steep climbs down and up the other side of the riverbank and crawling on hands and knees though the dense branches and brambles? Would it be a half a gram, or 300 grams (the largest Paolo ever found). So, after a number of slips, bumps and scrapes, Paolo made it to the find, persuaded Toppa (and by that time Milli, who had since joined into the fun) to pull back far enough away to allow his Vanghino to go to work. 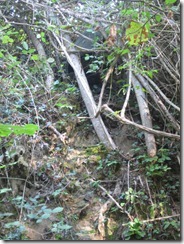 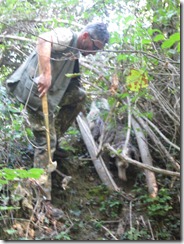 After about a minute, we had confirmation. It was indeed a truffle: a small truffle, but a truffle nonetheless. It was, however, buried deep beneath a tangled root structure and required a knife to dig out. Unfortunately, this required him to break the small, roughly one gram truffle, which halved its market value, from about €20 to €10. (At this rate, he clearly stands to make more money from guiding tourists than he does from finding truffles.) 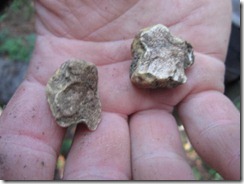 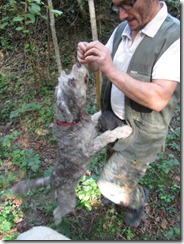 But while Paolo was disappointed with what turned out with his small find, he diligently filled his sustainability commitments by diligently replacing and tamping down the dirt he had moved. And this is only as all part of the coop’s sustainability initiative. Paulo and his fellow hunters also plant the type of trees (primarily oak, poplar and pine) most likely to spawn truffles and plant small pieces of truffle next to the roots of these and other trees.

After what was for us, if not necessarily for Paolo, a triumphant return from the hunt, we returned to Osteria della Crete for the next phase of our truffle quest: a four-course truffle lunch consisting of: 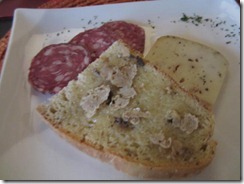 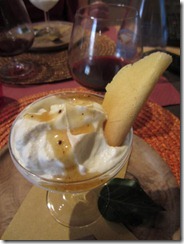 A very good meal (especially the pasta and the mousse) and, since it is Italy, a bottomless carafe of wine to accompany the lunch.

So, while Paolo may have been disappointed with his haul, we were very pleased. We learned about truffles and the essentials of truffle hunting, saw how it does and does not work, experienced the “thrill” of discovery and had a wonderful meal. Overall, a fun, educational and tasty truffle experience.

The only problem: when you combine this truffle experience, with the truffles that accompanied the lunches and dinners we had throughout our Tuscan trip, we felt in danger of OD’ing on truffles, just as we risked OD’ing on other foods during previous legs of our Europe trip (pierogi in Poland, sausage in Germany and especially, foie gras in France). Luckily, however, our concern faded by dinner, when we had truffles on pasta and an incredible truffle cream sauce with steak.