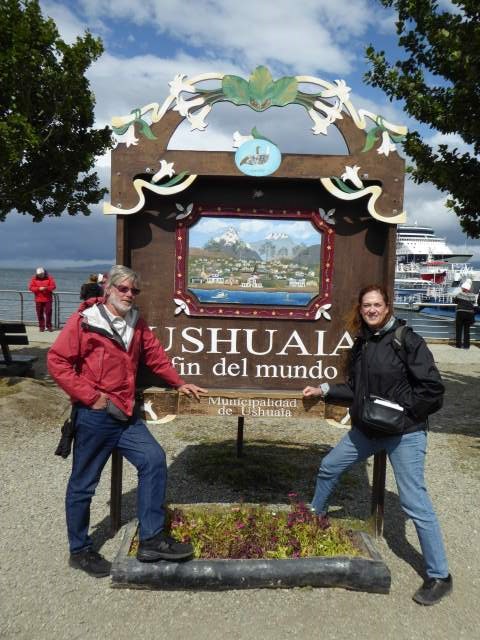 We were in Argentina for one purpose: taking a once-in-a-lifetime trip to Antarctica, the 7th continent and one we have always wanted to visit. But first, we had to get to our cruise boat, which was taking off from Ushuaia Argentina. While our Antarctica Adventures will be explored in our next series of posts, this one provides an overview of our day in and around the world’s southernmost city.

This is our second trip to Tierra del Fuego, the most southern region of South America. Our previous trip, a couple hundred kilometers to the north, took us to El Calafate, where we spent an afternoon trekking atop and frolicking on one of the continent’s largest glaciers. This trip provided only a day to explore the town, the mountains and the glaciers surrounding it. To be honest, a day in Ushuaia was more than enough time

The excitement began as our plane from Buenos Aires began its approach to the city, with its huge-glacier-capped mountains, its ruggedly austere tundra scenery and its iceberg-clogged waterways. The approach to Ushuaia by air can sometimes be bumpy. And bumpy it was. Even when the plane had landed and was parked at the gate, large gusts of wind kept the plane moving around. And speaking of wind gusts, we quickly got our heavier fleeces from our suitcases as it was quite chilly when we arrived and we even had some snow flurries. (Interestingly, when we got back to Ushuaia at the end of our Antarctica trip, Ushuaia was 70 degrees!. Talk about weather shifts)

Ushuaia proudly calls itself the “end of the world” and has a much photographed signed to prove it. 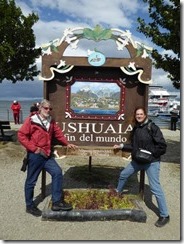 “Downtown” Ushuaia, consists of several streets and shops and is quite small by city standards, But you are at the end of the world. It was largely built by the prisoners, and provides amazing sights in every direction, down to the Beagle Canal and islands on one side, and up to the majestic peaks of the Five Brothers on another. Currently home to a naval facility, government offices, hotels/motels, a small fishing fleet, crab fishery and sawmills, its residential streets are generally lined with basic, functional, concrete, brick and pre-fab buildings, with a handful of prisoner-built historic buildings, some with carved gingerbread decoration and whose walls are now covered with corrugated metal to protect them from the elements.

These historic sights, along with an architecturally-confused main street and a monument marking the site of a mid-19th century mission, the prison and a few small museums, are pretty much it for the city’s tourist attractions. 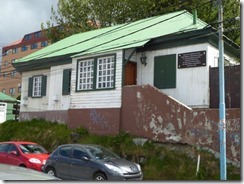 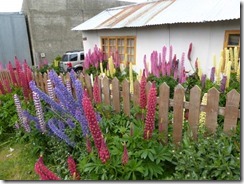 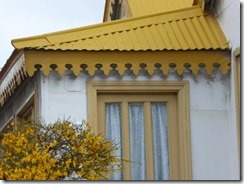 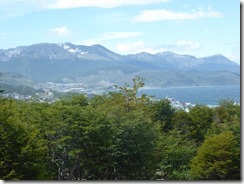 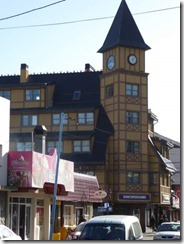 We, however, had a particular interest in an historic, narrow-gauge train ride to the “End of the World” through the Tierra del Fuego National Park, which encompasses the southern tip of the Andes. This 2.5-hour ride is aboard a renovated steam train that was once used to ferry inmates to and from the world’s southernmost prison to the forests in which they would fell trees (the stumps of which are scattered over the landscape), the mills in which they would saw the logs into timber from which they built a number of the now historic homes.

We were somewhat less enthused by the roughly $150 we had to spend (taxis, National Park pass and cost of the train), the long lines of people and by the half hour delay in the train’s departure. While the short, (approximately 2.5-mile) trip, the varied mountain, meadow and river views and the short trek to a scenic waterfall were nice, there was little that we could not have seen from outside the park. To be fair, however, we did not have the time to take advantage of a hike from the end of the line (which could have been easily accessed by walking). Our advice: Go to the park, but skip the train. 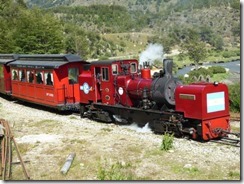 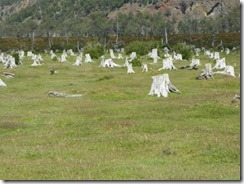 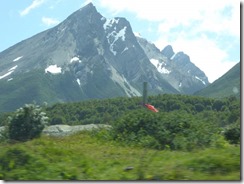 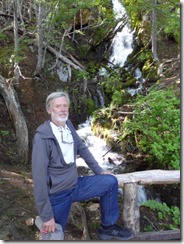 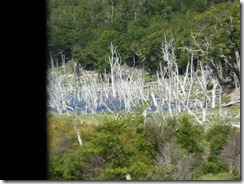 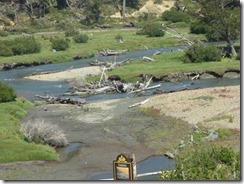 Nor could we pass up on a chance to taste the area’s most tasty product—king crab legs. Our first exposure to the crab was at our hotel, the much less than impressive (supposedly 5-star) La Hayas Resort. We ordered a vastly overpriced crab combination plate (steamed, tempura and dumpling) and a glass of wine that could have been served in a thimble.

Our real introduction to Patagonian king crab was at Restaurant Villagio. Although these crabs are somewhat smaller and less sweet than their Alaskan cousin, these crabs were fresh off the boat. (The only time we have ever had fresh Alaskan crab was on our first trip to Glacier Bay. On subsequent Alaskan trips, the crab was gfozen)

Being the gluttons that we are, we ordered a giant, 2 kg crab (which was a bargain if you are used to San Francisco pricing) which the server pulled from the full tank, presented to us for our inspection (it actually turned out to be 2.3 kg) and put it into steam while we had our appetizer (perfectly cooked and very good fried calamari rings). The crab came with a pair of scissors, and extra napkin and an extraordinarily helpful lesson as to how to extract the meat without getting punctured by the crab’s very sharp spikes—wrap a leg in the napkin, rip it off and pull it apart and then, use the scissors to make two lengthwise cuts up the shell. It worked like a charm. 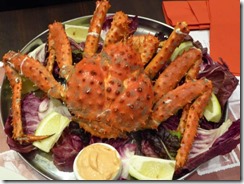 Although it was still a fair amount of work, the crab was delicious. And we almost finished the entire thing. And the lovely bottle of 2014 Rutini Mendoza Sauvigion Blanc was a perfect complement to the sweet crab.

We had apparently started a trend. Since we were the first in the restaurant to order the whole crab, people came over to admire our huge crustacean andi began to order their own. By the time we left, the tank was almost empty.

Luckily, they were restocked by the next day’s lunch, for which we engaged in an encore performance—albeit with a smaller (1.7 kg) crab and without an appetizer. The result was the same—culinary bliss, although the 2015 Don David Torrontes was much less compelling than the previous evening’s Sauvigion Blanc.

Although we were so enthrall of the king crab that we couldn’t even think about trying another type of restaurant, Tom, in particular, suffered pangs of nostalgia (from our previous journey’s trip to neighboring El Calafate) whenever he saw an assada restaurant, with racks of whole sides of lamb, lined up around wood fires for grilling. But, being the wonderful and thoughtful husband that he is, heI made the huge sacrifice of forgoing assada just so Joyce could have the joy of cracking and eating crab. Still, we had to grab a picture of it. 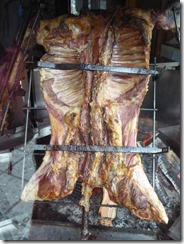 There must be some good hotels in Ushuaia, but not the Hotel Las Hayas (Las Hayas Ushuaia Resort) which was included as our first night of our Antarctica trip. It was located outside of the town itself and is reviewed as being one of the best in town. Maybe it is, but we ran into other people who stayed at smaller places that they said were nicer. But we suspect that few hotels could lodge the 100 people going on our Antarctic trip and the tour company had few options.  True, the hotel had a shuttle bus to downtown, but it only ran every 2 hours and only held 17 people. Most people ended up taking taxis to town. While it only cost about $10 by taxi, you still had to pay to go both ways. Or, you could walk to town. Walking to town was all downhill and only took about 30 minutes if you found the correct path. But going back was all uphill. Even for us San Francisco natives who are used to hills, we didn’t feel like climbing a mountain.

The room was OK. Furnishings were from around 1980 but the bed was comfortable. The cooling system was to open the windows and listen to the dogs howling all night long. The included breakfast was interesting. It had the right items, but it took the staff 15 minutes to replenish things on the buffet.

But the worse part was the staff. Few spoke English and those who did consistently gave us erroneous information instead of saying they didn’t know. This is a tourist hotel that is used by tour groups. Surely there should be people who speak English well enough to provide correct information. Not. Fortunately, this was the only negative that we had for our Antarctica trip, which we talk about in our next blog